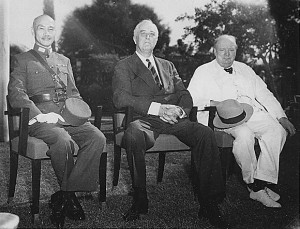 In 1943, Chiang, Roosevelt and Churchill met in Cairo to discuss the Allied war strategy against Japan and to plan the post-World War II world order. The Cairo Declaration which resulted from the conference stated that all parties, “agreed upon future military operations against Japan… It is their purpose that Japan shall be stripped of all the islands in the Pacific which she has seized or occupied since the beginning of the first World War in 1914, and that all the territories Japan has stolen from the Chinese, such as Manchuria, Formosa, and The Pescadores, shall be restored to the Republic of China.”

At that time, Mao Zedong was chairman of the Communist Party of China and played no part in the Cairo Conference. Yet posters for a movie about the historical meeting show Mao front and center, and have inspired mockery among Chinese netizens.

Tom Phillips reports for the Guardian:

Sima Pingbang, an arts critic, told the [Global Times’] English language edition: “By featuring Mao, who was not present at the meeting, but excluding Chiang, the poster shows no respect for history nor to Mao.

Some people might use the film “to defame chairman Mao,” Sima warned.

Adam Cathcart, a University of Leeds historian, said the Communist party had long tried to “insert itself at the main junctures of Chinese history”.

“What is different now, in 2015, is that Xi Jinping and his mighty bureaucracy seem absolutely determined to depict the People’s Republic of China as ‘present at the creation’ of the postwar global order, a global order which they interpret as being constructed around the constraining of Japanese power, cognisance of Japanese brutality, and punitive toward Japan.” [Source]

Colin Jones at the Diplomat looks at the legacy of World War II and how its impact is still being felt across Asia:

The Cold War is over, but the arrangement of territory and alliances that emerged under its sway endures. China and Russia maintain a wary affiliation. South Korea, Taiwan, and Japan are joined less by direct diplomatic affinities than a shared dependence on American military power. These divisions, now shorn of their ideological pretensions, have achieved a kind of second life in bitterly contested war memory. At a time when the generation who fought World War II is dwindling by the year, representations of their experience pervade popular culture, and disputes about its significance are infused into nearly all facets of East Asian politics. The 70th anniversary, in which each country is remembering essentially incompatible versions of the war, has put this abiding animus on display.

The People’s Republic of China has been conducting a host of commemorative events all year that will culminate in an enormous military parade on September 3 to celebrate the Communist Party’s victory in (as it is called there) the War of Resistance Against Japan and the Global Anti-Fascist War. That designation implies a Marxian theory about the inherently aggressive and authoritarian nature of capitalism, but in post-socialist China, this feature has often been given less play than the bare fact of Japanese belligerence. This was in evidence in an article published January in the People’s Daily, the Party’s official newspaper, which described the parade as an opportunity to “intimidate Japan.” Since then Beijing has rowed back. It now characterizes the day as an occasion to express international unity and hope for peace. In line with this new posture, several recent articles from Chinese historians have emphasized China’s contribution to the Allied victory. [Source]

According to the Economist, President Xi Jinping is playing up the CCP’s version of history ahead of the major military parade marking the 70th anniversary of the end of the war:

Under Mr Xi, the logic of history goes something like this. China played such an important role in vanquishing Japanese imperialism that not only does it deserve belated recognition for past valour and suffering, but also a greater say in how Asia is run today. Also, Japan is still dangerous. Chinese schools, museums and TV programmes constantly warn that the spirit of aggression still lurks across the water. A Chinese diplomat has implied that Japan’s prime minister, Shinzo Abe, is a new Voldemort, the epitome of evil in the “Harry Potter” series. At any moment Japan could menace Asia once more, party newspapers intone. China, again, is standing up to the threat.

As our essay on the ghosts of the war that ended 70 years ago this week explains, this narrative requires exquisite contortions. For one thing, it was not the Chinese communists who bore the brunt of the fighting against Japan, but their sworn enemies, the nationalists (or Kuomintang) under Chiang Kai-shek. For another, today’s Japan is nothing like the country that slaughtered the inhabitants of Nanjing, forced Korean and Chinese women into military brothels or tested biological weapons on civilians. [Source]

In response to the rewriting of history shown on the Cairo Declaration movie poster, Internet users uploaded photos of themselves or other famous individuals with the tag #开罗宣言：

CDT is now selling t-shirts and iPad covers featuring Badiucao’s work in our Zazzle store. See also a Q&A with Badiucao in which he discusses his artistic and personal influences, and his earlier cartoons for CDT.