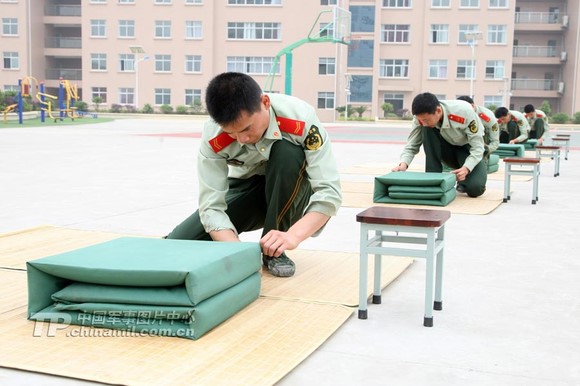 Skill acquired by members of China’s military and law enforcement that is periodically highlighted in state media, then mocked online.

Photo-rich reports on blanket-folding in the People’s Liberation Army (PLA), the police force, and even at universities have been criticized by netizens as an absurd placement of time and effort. The Daily Mail’s Sam Webb reported on one such incident, a PLA blanket-folding contest in 2013:

Chinese citizens were bemused earlier this year [2013] when the Chinese military released pictures of 500 army recruits taking part in a quilt-folding contest in Nanjing, capital of eastern China’s Jiangsu Province. The recruits were tasked with folding the quilt as precisely and neatly as possible.

The populace took to the internet and joked that China’s military superiority was assured as its soldiers excel in the art of neatly folding their bedding. [Source]

Amid territorial disputes in the South China Sea between the Philippines and China in 2012, a post on the now-defunct Luobowang proclaimed, “If you, Philippine army, try to invade us again, we’ll pick up our blankets and fold you to death!” (菲律宾再若来犯 拿被子叠死你们！)

ZuojiaCuiChenghao (@作家崔成浩): I might be called back to fight in a war, and my superiors will pass the message to me that I’ll need proper military training first. How about I start by learning how to fold a blanket?