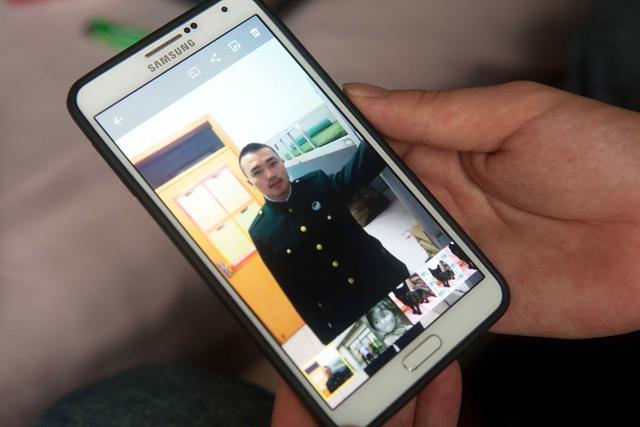 Under Chinese law, large companies are required to recruit their own, independent fire departments to deal with on-site emergencies. A report from the South China Morning Post describes these emergency response regiments as “the lowest level in a three-tier firefighting system on the mainland. The first two tiers of firefighters are controlled by the Ministry of Public Security and local governments.” Members of these contracted fire brigades often receive little training and lower compensation than official fire responders, and due to their proximity are usually the first to arrive at emergencies like the one that occurred near the port of Tianjin last week.

The first 60 or so firefighters to arrive on the scene of the August 12 warehouse fire were contracted to the state-owned Tianjin Port Group. Many of these contract workers were in their late teens, and their relative lack of formal training may have contributed to the subsequent blasts. Had these first responders known that spraying water on a chemical fire could prompt an explosion, last week’s devastation may have been significantly less.

The family members of these young contractors have been asking officials for information on their missing sons since last week, and claiming that the contract workers have been discounted from the official death toll and lists of missing persons. With no news by Sunday, around 50 family members staged a protest outside of a district government office.

An August 16 Southern People Weekly article profiling a sister’s relentless search for information about her missing brother, a firefighter in Tianjin Port Group’s contracted fire brigade, has been deleted from WeChat and Weibo. CDT has translated the article below. See also another article from Hong Kong-based Initium Media (端傳媒) profiling several other missing teenage fire response contractors via CDT Chinese.

On August 16, the sixth press conference on the August 12 Tianjin explosion accident finally included detailed information on the number and types of missing persons: 95 total missing, including 85 firefighters; 13 of which were active duty and 72 working as contractors for Tianjin Port Company. One day prior, the families of the Tianjin Port Company’s [contracted] firefighters gathered in front of the conference, as their call for public information had still gone unrecognized.

Last year, 18-year-old Li Changxing graduated from a vocational school, but his electrical welding certificate had not yet arrived. As it happened, his older sister Li Yanxiao had just heard that the Tianjin Port Company was recruiting firefighters, and went to inquire if the job was dangerous. After all, there was only one male in her household.

The recruiter said that the job was like “kindergarten for adults,” where your children are looked after and given time to practice. After two or three years’ time, if they’re unwilling to do the job, they trained some more. For young men, isn’t it just like joining the army?

Li’s family was happy. Li Changxing’s brother-in-law, who was born and raised in Tianjin’s Tanggu district, didn’t recall a single accident at the port in the past 20 or 30 years. Li Yanxiao was from a rural village, and had come to Tanggu 15 years ago. She understood how great this job was. “As soon as you say you work at Port Group fire control, you’ll command a lot of respect.” 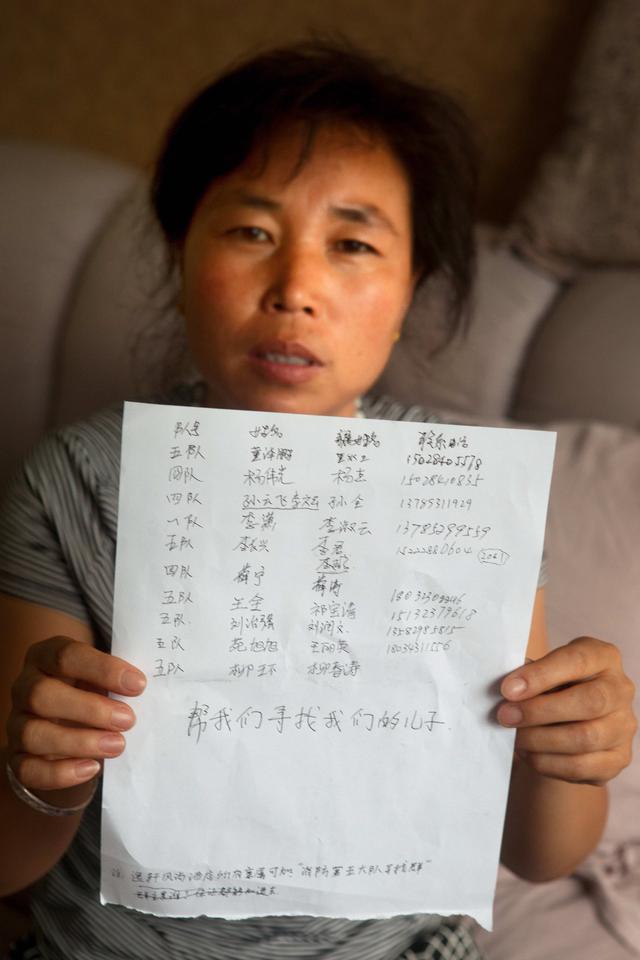 The mother of Yang Weiguang, one of the missing firefighters from Tianjin Port Company’s fourth fire brigade, wrote “Help us find our son” below a list of the names of the missing.

Last summer, just as he reached adulthood, Li Changxing became a member of the “best work unit.” Although the contract workers were treated differently than formal port employees such as the team leaders and instructors, Li’s family saw no point in looking into it—there are so many position at the port authority offering different compensations for the same contract, so what is there to ask about?

But there were still things that knotted up in Li Yanxiao’s heart. Her younger brother said his work unit provided him “three insurances” [a basic social insurance package including healthcare, pension, and unemployment coverage], but he’d yet to see his medical insurance card. She asked him why. He didn’t know, but he said that if he sustained an injury he could submit receipts for reimbursement. Except for this, the Li family had yet to see any contract or other proof of employment.

“They pay their salaries in cash? I asked, how are you going to get paid? He said they’d been doing it this way for years. It was hard to explain. If asked again for a payroll card, they definitely wouldn’t give him a straight answer,” Li Yanxiao said. “I hadn’t thought about it much.”

After just a month with the Tianjin Port Public Security Bureau’s fifth fire brigade, Li Changxing started to back out. The port was far from home. There was no leave for the New Year. It was inconvenient to get online. They were just a bunch of guys hanging around.

Facing her brother’s resistance, Li Yanxiao asked, “How can you know so little? “ She went through the whole miserable process of buying cigarettes for gifts to grease the social wheels, and her brother didn’t object.

A year went by in the blink of an eye. Normal training included push-ups, jogging, horizontal bars, lifting water bags, and spraying water. Li Yanxiao asked her brother if there had been any alerts. Li Changxing said only twice: once when someone’s cell phone fell into a ditch, and another when a dog fell into the water.

Training at the adult kindergarten went according to plan. Li Changxing hadn’t since brought up the idea resigning. The last time he went home, he probed his sister, saying, “Sis, I see the veggies we’ve picked make a very nice meal. I’m thinking in a couple more months I might come back here to do that.” His big sister agreed. 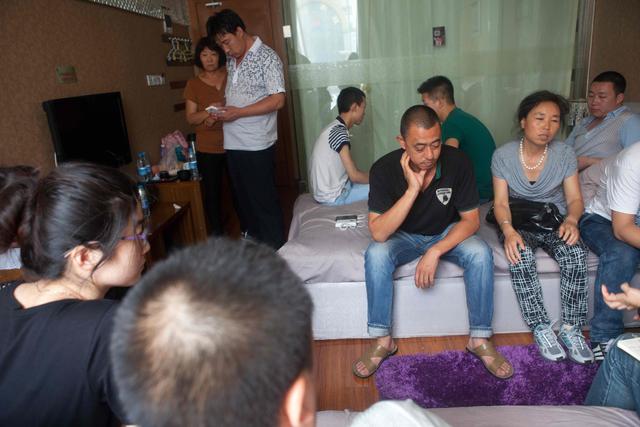 After finding out that Yang Weiguang was missing, 17 friends and relatives rushed over to track him down, cramming into a guest room to wait for information.

On the night of August 12, Li Changxing and his 24 fellow firefighter in the fifth brigade were sent out on their first fire alert. They were the first firefighters to arrive at the scene of the accident. So far, there has only been news about one person—he died. The first and second brigades were dispatched at the same time. On the fifth day after the accident, an official announcement confirmed that 72 Tianjin Port Company firefighters were unaccounted for.

Li Yanxiao has a friend whose husband and uncle are both Tianjin Port Company firefighters. Her uncle died. Only after her husband identified the body did her family go to the hospital to request the remains. Li Xiaoyan and the family of the other missing firefighters don’t know any fire brigade insiders, so they don’t know who to ask. They can only rely on the fragments provided by the media to try to piece together a story as they run from one hospital to the next.

“At any hospital I go to, they have people from the fire brigade to receive family, but none for the family of Port Group firefighters.”  Li Yanxiao anxiously asked a doctor for a piece of paper and wrote “I want information on the Dongjiang fifth brigade” and her phone number. After that, two leaders in Public Security uniforms arrived “reeking of alcohol and took me away. They said to me, ‘You can’t be like this.’”

Li Yanxiao asked, “Leaders, can you give me some information?” “We don’t dare to confirm anything.” She continued to ask, “Why do the families of other development area fire brigades have someone to receive them? We don’t know who to ask!”

After returning that evening, Li Yanxiao received two phone calls. The first was a woman who said her nephew was also in the fifth brigade. She’d received a call that afternoon that all 25 firefighters in the brigade “hadn’t been hurt at all,” and that they were now “out working.” A little later the next call came from another man who said the same.

“That evening, we felt relieved.”

But in the middle of the night Li Yanxiao felt that something wasn’t right. At 3 a.m., she called the man back. “He was brushing his teeth,” she said. “He told me again, whether you want to believe it or not, I’ve already given you the information.” 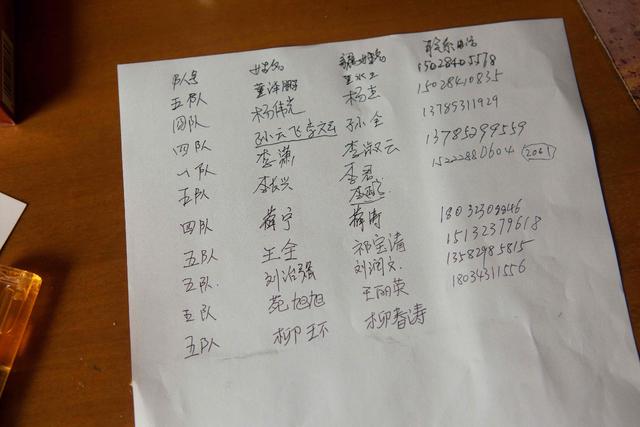 At a city hospital’s ICU, Li Yanxiao saw someone who looked like her brother, but she was unable to enter and verify that it was him. She thought about having a DNA test, and tried again to negotiate. The fire brigade said she had to get approval from the free trade zone, otherwise she’d have to do it herself. And if they didn’t let her collect DNA from the body, it would be no use.

Li Yanxiao collected her brother’s things from the fifth brigade dormitory. She saw that the team members’ cell phones were all on their beds charging. She seemed to realize something. The team wasn’t allowed to bring their phones while on duty. When the explosions first occurred, Li Yanxiao hadn’t been able to get through to her brother’s phone. On the second afternoon after, she could ring through, but still got no answer.

Li Yanxiao went to the hospital to deliver a DNA sample. Her father said he fully believed his son was still alive, and that he wanted to come along to have another look. They went together to the hospital. “In my heart, I understood. I’d confused him.”

At the hospital, someone was announcing the names of missing persons from the Tianjin Port Company, but Li Yanxiao only heard one name, Su Mei. She went ahead to see the note in the man’s hand and spotted a second name, Qiao Peng. Qiao Peng was in her brother’s brigade. “Why don’t you say Qiao Peng’s name?” she asked. The reply she got was “I’m not sure.” 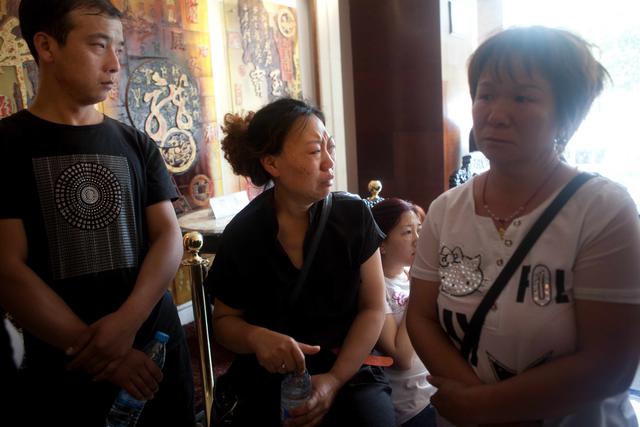 On August 15, family members of missing firefighters wait outside a conference for media interviews.

According to a China Newsweek report, a Tianjin Port Public Security insider said, “We have a list of internal statistics confirming the number of missing and confirmed martyrs, but there is nothing I can say.”

“If this has become a fact, we can accept that. But what is it that we don’t accept? He denies these people, but then won’t let us see the bodies.”

Currently, Qiao Peng is the sole person from the fifth brigade that we have any information about.

Li Yanxiao is 30 this year. She seems highly capable, speaks coherently, is firm and persistent. On first sight, you could mistake her for a reporter who has come to interview family members. She said that in recent years she has wanted a stable life, and that was the reason that she prevented her brother from resigning.

He is too young, he might like the outside world,” she said. “The only thing he liked was that cell phone.” When describing her brother’s work, she cried.

On Sunday, Premier Li Keqiang told Xinhua that all perished firefighters—including staff and contractors—are heroes, and their families will receive the same compensation.