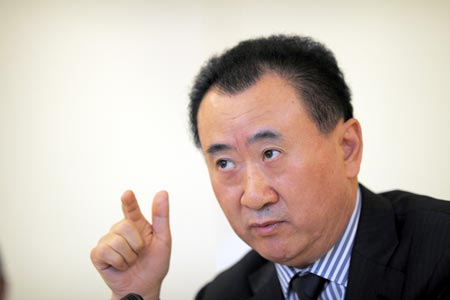 Responding to questions about a New York Times investigation into ties between Dalian Wanda Group and Chinese political elites, Wang Jianlin, the property developer’s chairman and China’s richest person, maintained that his firm’s success was not based on political connections. At a talk at Harvard Business School on Thursday, Wang admitted that President Xi Jinping’s elder sister and her husband were once shareholders in Dalian Wanda Commercial Properties, but claimed that “Wanda has no political affiliations.” From Michael Forsythe, the investigation’s author, at The New York Times:

The Times article said that the couple had acquired large stakes in Mr. Wang’s flagship company, Dalian Wanda Commercial Properties, before it went public The shares they purchased through a holding company for $28.6 million in 2009 are now worth $201 million.

Mr. Wang said that Mr. Xi’s sister, Qi Qiaoqiao, and her husband, Deng Jiagui, had sold their shares before the I.P.O.

[…] Mr. Wang added, “This actually proves that it is not corruption, but that President Xi Jinping governs the country strictly, and he manages his family even more strictly.”

[…] In defending the company’s ties with Mr. Xi’s relatives, Mr. Wang may have inadvertently drawn attention to a common practice among wealthy and powerful Chinese people: the transfer of shares, sometimes to distant relatives or business associates, to mask business interests. [Source]

Forsythe’s investigative piece on Wang Jianlin was originally written for Bloomberg News, whose top editors decided not to publish the article due to fears that the report would jeopardize the company’s business opportunities in China. Forsythe left Bloomberg in 2013 over the handling of the article before joining The New York Times in 2014.