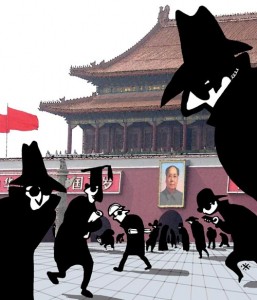 On the first birthday of China’s counterespionage law on Sunday, after a series of arrests of suspected spies from Japan and the U.S., state security officials in the province of Jilin launched a hotline for Chinese citizens to report suspected espionage activities. Austin Ramzy at The New York Times reports:

The hotline, run by the Jilin state security bureau, was set up to help citizens who encounter behavior that would harm China’s national security to report the matter immediately to state security organs, the Jilin Daily article said.

It warned of individuals or groups who “steal, pry out, buy or otherwise illegally obtain state secrets or intelligence, or conspire, coerce or pay government employees to become traitors.”

[…] To report a spy, “tell us who he is, why you suspect him,” said the officer, who declined to give his name. “We’ll write everything down and report it to our supervisors. They will investigate the matter and get back to you.”

He said investigators would respond within a number of days, but that there was no reward.

A potential spy could be Chinese or foreign, and did not necessarily need to be an official. “Anyone can be a spy,” he said. “And anyone can also not be a spy.” [Source]

It warned the Chinese public to be wary of a range of people including foreign journalists, “some NGO workers” and students with extensive study-abroad experience.

It also advised citizens to be on the lookout for people who engage in suspicious behavior, such as asking others for their opinions on “sensitive” topics and regularly meeting with others to exchange goods or documents.

Among those on the list: “People who frequently make reactionary remarks at academic seminars and business conferences and overstate the good points of foreign countries.”

Critical social media users noted that much of the advice sounded ham-fisted and questioned whether the post was a joke. The man answering the hotline said he hadn’t seen the document and didn’t know whether it was genuine. [Source]

Suspicion of “hostile foreign forces” has recently found expression in, for example, a draft law to govern foreign NGOs and a concerted campaign against “Western values” in academia.