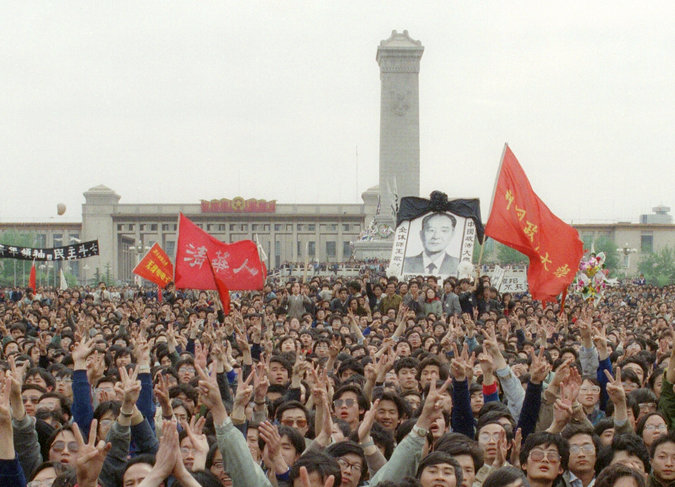 At a symposium commemorating the centenary of Hu Yaobang’s birth, President Xi Jinping praised the former Chinese Communist Party General Secretary for his achievements and his contributions to the Party and the people. From Xinhua:

Xi spoke about Hu’s great and glorious achievements, saying that Hu had made outstanding contributions to China’s independence and liberation, its socialist revolution and construction, and the exploration and creation of socialism with Chinese characteristics.

Hu was extolled as a time-tested and loyal communist soldier, great proletarian revolutionist and statesman, outstanding political worker of the military and prominent leader of the Party.

He devoted all his life to the Party and the people, Xi said.

“To commemorate Hu Yaobang is to learn from his noble character of always being true to his belief and dedicated to his ideal,” said Xi. [Source]

A liberal Party reformer ousted in 1987, Hu’s abrupt death in 1989 unleashed a string of demonstrations that culminated in the 1989 Tiananmen Square pro-democracy protests and the violent crackdown on June 4th that ended the movement. Hu’s memory had been suppressed since and was not revived until the 90th anniversary of his birth in 2005. The New York Times’ Chris Buckley and Adam Wu report that sensitive elements of Hu’s past were not mentioned during the commemoration:

[…] Mr. Xi and other leaders appeared to have choreographed the commemoration of Mr. Hu to avoid praising his liberalizing record or conceding to hopes from Mr. Hu’s family for acknowledgment that his ousting from power in January 1987 was unjust, said Robert L. Suettinger, a senior adviser at the Stimson Center in Washington, who is writing a biography of Mr. Hu.

“My impression thus far is that the commemoration is being very carefully managed by the party to ensure that it doesn’t encourage any challenge to the regime,” Mr. Suettinger said in comments emailed before Mr. Xi spoke.

[…] Officially admitting that Mr. Hu was unfairly driven from office, Mr. Suettinger said, would “open up a host of difficult questions about the process by which he was ousted (very irregular), and about the correctness of the student demonstrators who demanded the case be reversed after Hu died in April 1989.” [Source]

On Twitter, Chris Buckley posted a link to the full text of Xi’s commemoration speech:

At The New York Times, Vanessa Piao spoke with Chinese playwright Sha Yexin about “The Conscience of Hu Yaobang,” a new play that looks at Hu’s role in rehabilitating officials and intellectuals purged under Mao. Among those who were rehabilitated include President Xi Jinping’s father, Xi Zhongxun:

Q. Why did you decide to write about Mr. Hu rehabilitating people who had been persecuted during the Anti-Rightist Campaign and Cultural Revolution?

A. More people were affected by Mr. Hu’s rehabilitation campaign than by the emancipation of slaves in the United States. Its significance lies, first, in the number of people involved and, second, in the injustice they suffered.

Third, what happened to these people had been kept secret. In the United States, there are public records on how many slaves were traded. But our dead still tell no tales. What Hu did was rare in human history. So his overturning of political cases was well received in China and abroad. And he took risks in doing this. No one else dared.

Plus, his actions make for good drama. [Source]

As a part of the commemoration, the People’s Publishing House will be releasing a collection of Hu Yaobang’s speeches and works produced between 1952 and 1986.