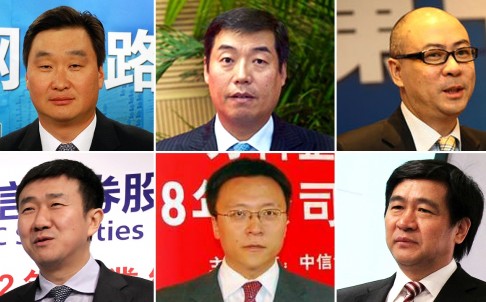 Citic Securities Co., one of China’s biggest securities companies, said over the weekend that they are unable to reach two of their top investment bankers amid reports that the pair might be under investigation for suspected securities violations. The two are the latest executives to go missing from Citic as authorities deepen a probe into a massive stock market crash over the summer. Summer Zhen at South China Morning Post reports:

Mainland Chinese business media Caixin on Friday reported the pair had been detained and are either under investigation or assisting in an investigation by authorities.

Four executives were taken away by police earlier this year, including company president Chen Boming, who is in charge of the brokerage’s daily operations. [Source]

Bloomberg reports that shares in Citic and other financial firms fell following news of the latest disappearances, against a general rise. The government probe on the securities industry is led by Fu Zhenghua, former Beijing police chief and current Deputy Minister of Public Security, who has tackled a number of prominent cases including that of former security chief Zhou Yongkang.

Wang Xiaolu’s Confession and the Future of Chinese Media