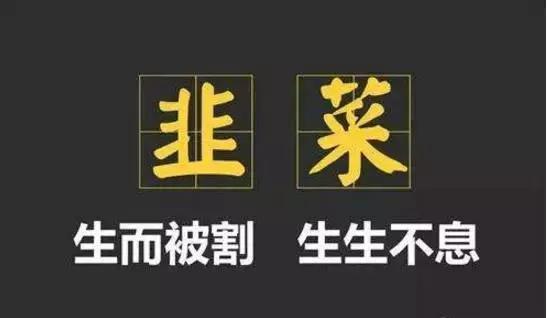 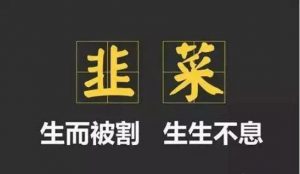 A self-deprecating description of individual investors who re-invest in the stock market after initial losses; also used to address youth disillusionment and endemic government corruption.

In addition to the prolonged U.S.-China trade war that began in 2018, another reason the Chinese stock market has experienced its fair share of wild ups and downs since 2015 is that individual and often inexperienced investors—also known as “scattered” investors (sǎnhù 散户)—account for a high percentage of investor accounts on Chinese stock exchanges. With precious little knowledge of market dynamics, these individuals can be swayed by policies and propaganda that rouse angry protests after they subsequently suffer losses. However, just as chives will regrow after being cut above ground, after some time has passed, they may ultimately return to try their hand at it again.

It has also been used to describe an inherent tension and ecosystem of “mutual harm” between the youth and the preceding generation, in which the youth suffer socioeconomic pressure or disillusionment from soaring house prices, and from fraudulent business practices by which billions of dollars have been stolen from investors.

CDT editors’ searches for the term yielded no results on Weibo on September 20, 2018, suggesting it has become a “sensitive word.” The following comments come from FreeWeibo.

“Cut chives” is also used as a metaphor for the inability to curb endemic corruption, as a new generation of corrupt officials would only spring from the place of the fallen. Officials have argued against this line of thinking, stating that the government is consciously seeking to dig out corruption from the roots.

//Zhanlueweiping- (@战略微评-): //@Chujiantezhenzu: In managing corrupt officials, one cannot adopt the method of cutting chives. Rather, one should treat both the symptoms and the disease, and establish a comprehensive, long-term governance mechanism. //@Boshuchangqing1: Present the officials who are preparing to die, use your pen to confess to the people the entire process of how you are walking the road to ruin. Pull back the dark curtain on officialdom, unmask the officials that force you to walk the road of ruin. This will bring our souls peace. //@Zhanlueweiping-: @Shezhengwangyeyouhuashuo@Yannanxuan