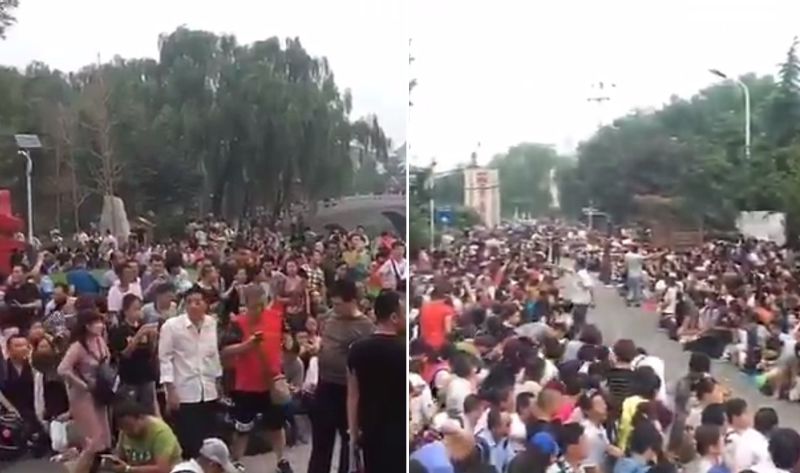 Hundreds of investors gathered in Beijing on Monday to protest the government’s investigation into Shanxinhui–a self-proclaimed charity that has been shut down by authorities for operating a pyramid investment scheme in guise of helping the poor–and the arrest of its founder Zhang Tianming. Police have begun a clearance operation at the protest site and declared the rallies “illegal,” Elson Tong at Hong Kong Free Press reports:

Demonstrators began gathering over the weekend outside Beijing’s Dahongmen International Convention Exhibition Centre and the Supreme People’s Procuratorate after last week’s arrest of Shanxinhui founder Zhang Tianming on suspicion of operating a pyramid scheme. Participants claimed that as many as 60,000 people protested on Monday morning.

[…] On Monday evening, the Beijing Public Security Bureau announced on its Weibo social media account that the protests, which blocked off several streets, were illegal.

“On July 24, 2017, some ‘Shanxinhui’ members were incited by people with other intentions to illegally assemble in Beijing, severely disrupting the social order of the capital,” read the announcement. “This behaviour constitutes a suspected violation of laws and regulations.”

“The Public Security Bureau has assembled police officers to maintain order, to keep the crowd safe, and to encourage demonstrators to depart from the scene,” it added. “[Officers] have taken away individuals who pick quarrels and disobey orders for investigation.” [Source]

Despite official reports accusing Shanxinhui of duping mom-and-pop investors through unrealistic promises of high investment returns, many investors appeared unwilling to accept the claim that the company had a questionable business model. Protesters complained that the government has threatened their earnings by freezing funds as part of the investigation and insisted that authorities have unfairly accused the company, which they believe has genuinely helped the poor. From Chris Buckley and Austin Ramsey at The New York Times:

“Today’s protest was self-organized,” said Li Yinuo, a 31-year-old investor who joined the demonstration. She said she had traveled to Beijing from her home in nearby Hebei Province and had heard that investors were gathering. “They call us a pyramid scheme, which is absolutely not true. We came here today first to save ourselves and the platform. Second, we want Mr. Zhang to be released. Mr. Zhang is such a fine man.”

[…] One investor, Zhao Guosheng, 40, said he had invested 3,000 renminbi, about $450, with Shanxinhui this year. He accused officials in the city of Yongzhou, in Hunan Province, of threatening to label Shanxinhui a pyramid scheme if the company did not pay off the politicians.

Mr. Zhao complained that the arrests of Shanxinhui managers meant the company could no longer raise money. “The people who gathered at Dahongmen today wanted to pressure the government to release the company leaders and let the company run as normal,” said Mr. Zhao, who did not attend the Beijing protest. [Source]

A major road was shut down during the protest, Reuter’s Ben Blanchard reports:

Police blocked off a major intersection in a working class southern Beijing neighborhood, lining up police cars and vans along the road and forming a cordon to prevent people accessing the grounds of a small convention center where some of the protesters had gathered.

Dozens of other investors in the company stood on the roads outside the center, as police kept a wary watch but did not attempt to move them on.

It was not immediately clear how many people were inside the grounds of the center or why they had chosen it as the site for their demonstration. [Source]

China Public Security Minister has vowed to crack down on financial crime and fraud due to the risk of social unrest that can result from fundraising schemes targeting large numbers of small-time investors. Last year, waves of frustrated investors took to the streets after losing their life savings to shady financing ploys. Jane Cai at South China Morning Post reports:

“There are huge risks in new types of financial crime in this era of the internet … we must resolutely prevent financial crime issues from turning into systemic financial risks to safeguard social stability,” Guo Shengkun, China’s police chief, said in a statement on the ministry’s website.

Guo said at a nationwide meeting with local police authorities on Sunday that law enforcers must use “big data” technology to uncover and stop such crimes as early as possible.

Monetary easing in the past decade and a fragmented financial regulatory framework have led to a mushrooming of fraudulent investment programmes, spreading quickly online and luring millions of mainland investors to put down their savings for the promise of high returns.

Ezubao, a peer-to-peer lending company created by a man in his mid-30s, illicitly obtained more than 50 billion yuan (US$7.4 billion or HK$57 billion) from more than 900,000 investors in just 18 months before it was busted by the police in early 2016. [Source]