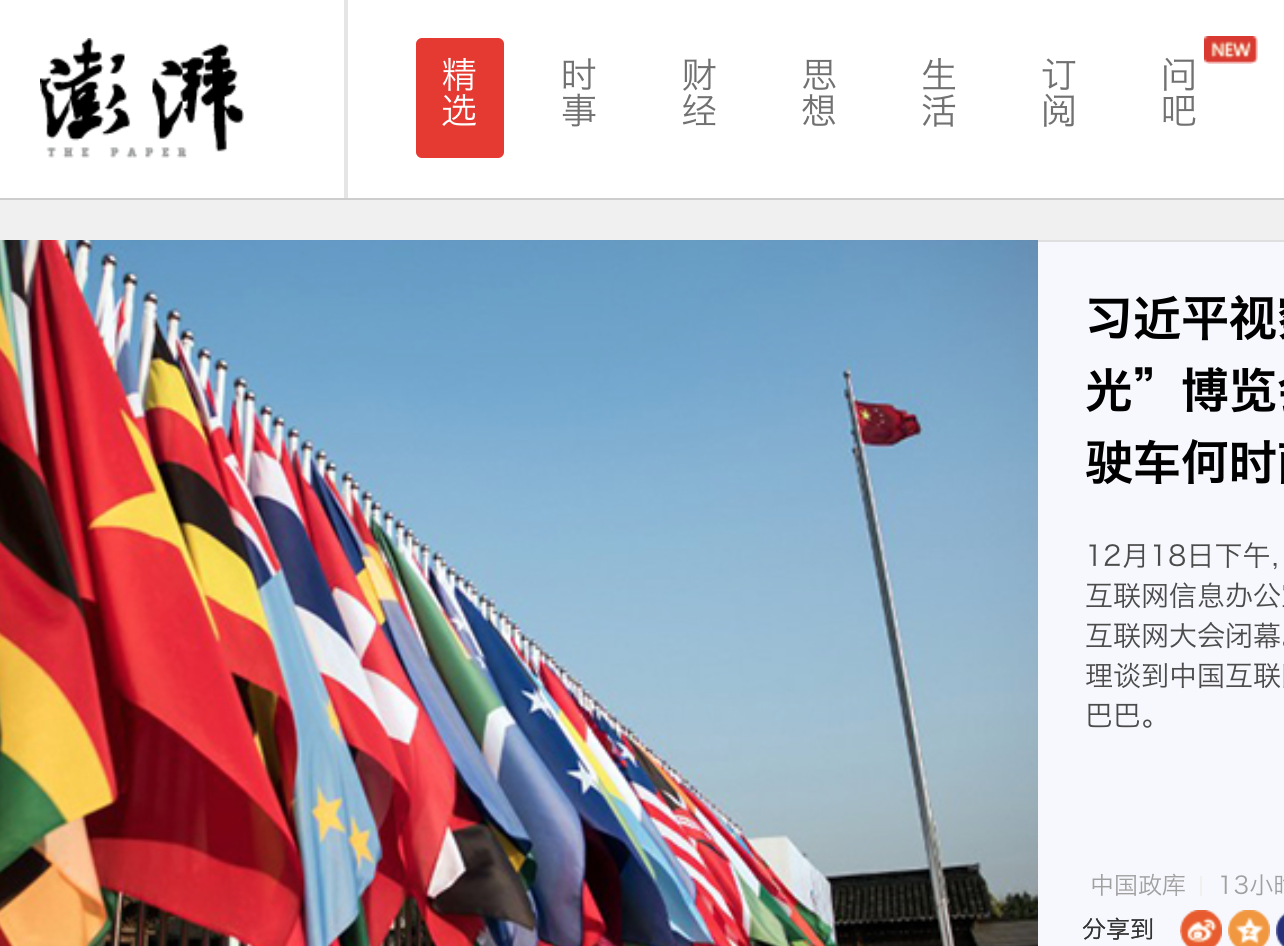 Launched in July of 2014 by the state-owned Shanghai United Media Group amid President Xi Jinping’s call for an upgrade to traditional state propaganda, The Paper (Pengpai 澎湃) represents the Party’s foray into hip, web 2.0-style newsblog. At Foreign Policy, Tabitha Speelman takes a close look at the state media startup and its modern approach to guiding the public opinion of China’s increasingly web-savvy population:

[…W]hile some state outlets do have a large mobile presence — party mouthpiece People’s Dailyoperates a huge public account on mobile messaging platform WeChat — the Paper has distinguished itself by successfully integrating into the media diet of many young Chinese, most of whom would normally not follow or share state media’s often stodgy coverage.

The popular and slick-looking app offers over 100 news and background stories a day in 49 categories that range from rule of law to real estate to art. It is already a staple in WeChat feeds and web portal repostings, greatly amplifying its influence. The quantity and range of content attracts readers, most of whom are young and educated. Bruce Bo Ding, 26, a Guangdong native who now works in an art gallery in Shanghai, said thePaper is the only news app left on his phone. “I only have so much time,” said Ding. “Pengpai offers a lot of content in one place. I can just pick and choose.”

[…] From the start, the Paper, which is part of the state-owned Shanghai United Media Group, had a difficult mission. The expectations from the leadership were clear: gain influence without making anyone up top look too bad. To do so, the start-up had to appeal to online readers, many of whom have an appetite for in-depth news without overt propaganda. “You have the right to know more,” goes one of the Paper‘s advertising slogans. […]

[…] So far, the government’s strategy of cultivating online media start-ups as a way to reach new audiences, in addition to boosting the social media presence of state outlets such as People’s Daily and CCTV, seems successful. Already, outlets across the country are copying the Paper’s model. In the past half-year, media groups have launched similar online platforms in the provinces of Sichuan, Henan, Hubei, Guangdong, and Xinjiang, as well as in the capital Beijing. The Paper itself is working on an English-language platform that will be launched in the first half of 2016. “It is another sign of the Paper‘s success,” said Wei Wuhui. “The people from the State Internet Information Office are quite satisfied.”And even after leaving the Paper to pursue other interests, the anonymous reporter working in Shanghai remains an avid reader. Caixin, the Beijing-based publication famous for its investigative journalism, is probably better, she said, “but reading a Caixin long-read takes a lot of time and dedication. The Paper is faster and more accessible.” […] [Source]

For an example of the modern and amusing presentation style now being cultivated by state propagandists, see CDT’s translation of “Who Are the Sly Chaoyang Masses,” a The Paper article that was censored shortly after its original posting early this year. Also read more on online public opinion and state media, via CDT.