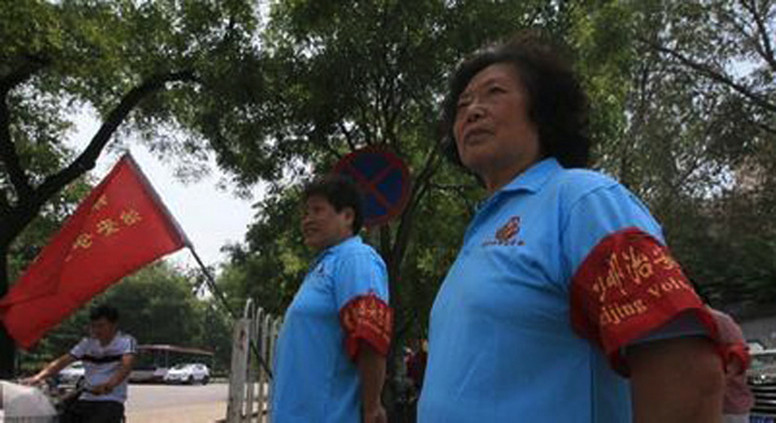 Last year, China launched a nationwide anti-drug campaign. One very successful means for nabbing those with a taste for illegal intoxicants has been crowdsourcing—in Beijing last September the municipal Public Security Bureau promised cash rewards for information on illegal drug use supplied by “the masses” (群众) [Chinese]. (Cash rewards for civilian informants have also been offered in Xinjiang and Tibet as part of an ongoing nationwide crackdown on terrorism.)

Amid the anti-drug drive, many rich and famous personalities in the nation’s bustling capital have found themselves under arrest and their names decorating headlines. Earlier this month, ThePaper.cn (澎湃), China’s hip new state excursion into the realm of web 2.0-style newsblogs, published an entertaining article warning celebrities in Chaoyang—Beijing’s stylish cosmopolitan district—just how ubiquitous and discerning the eyeballs of the masses are in the neighborhood. The article was removed from ThePaper.cn within days, but Google’s cached version is still available, and CDT’s Mengyu Dong has now translated it:

ThePaper Simulcast: Who are the Sly Chaoyang Masses Anyway？

Since 2014, Chaoyang District has had a near monopoly on “drug stars.” One after another, Li Daimo, Zhang Yuan, Ning Caishen, Zhang Yaoyang, He Shengdong, Gao Hu, and Yin Xiangjie joined the Chaoyang Drug Star Alliance. This year, two other stars joined: Wang Xuebing and Zhang Bo. This line-up is enough to instantly overshadow the Dongcheng District, which only has Ke Zhendong and Fang Zuming [a.k.a. Jaycee Chan, son of Jackie Chan]. The Chaoyang cast surpasses all districts in Beijing and tops the country as a whole.

In addition, on the bench of the Chaoyang Drug Star Alliance sit Charles Xue, Huang Haibo and Wang Quan’an, on loan from the Chaoyang Prostitutes Solicitation Alliance. 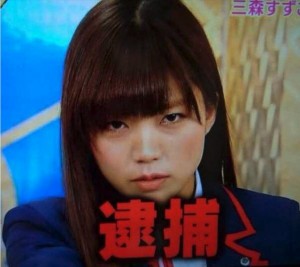 Pengpeng: Why are so many stars using drugs in Chaoyang?

Paipai: It must be because outside reactionary forces are recklessly blackening our Great Chaoyang District by positioning there a high school chemistry teacher who is suffering from a deadly disease.

The Chaoyang District has already made its fame on Internet more than once.

In 2012, the hottest domestic short-distance travel route was the “Day Trip to the Chaoyang Park Fight Club.” Qihoo board chairman Zhou Hongyi, Xiamo board chairman Lei Jun, Wu Fatian from the China University of Political Science and Law, and Zhou Yan, a journalist from Sichuan, are all avid fans of this route.

In 2013, the meme “Chaoyang Ho,” also known as “Green Tea Ho,” was born. Chaoyang hoes are models or actresses with verified Weibo accounts. They earned this name because more than half of them live in Chaoyang. Every year in the spring, when the good people are celebrating the Qingming Festival, the Chaoyang hoes get going. They dress to the nines and flock to the Southern island city of Sanya to attend the Hainan Rendez-Vous, an annual gathering to hunt for newly-rich. 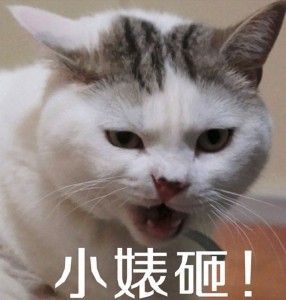 In wealthy places with money, there exists a bohemian element. And in bohemia, there are scandals. Chaoyang is like that too.

And now a word from our sponsors:

Chaoyang is the largest district of Beijing, a new urban area that is is constantly seeing progress in the capital city. Here in Chaoyang, there is the nationally-renowned Central Business District, which is home to nearly all foreign embassies in China, and also the main stadiums for the 1990 Asian Games and the 2008 Olympics. There is also Sanlitun, the center of Beijing’s nightlife. There are high-end communities, golf courses, and all the neighborhood amenities you’ll need. This is your top choice for housing in Beijing.

This well-decorated apartment is currently available. The owner is famous film director Wang Quan’an. He was invited to coffee by the Chaoyang police and hasn’t returned since. The current price is RMB 88,000 (USD 14,162) per square meter, a mere RMB 88,000. 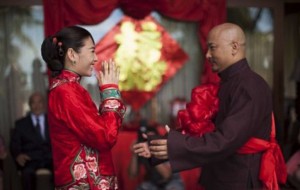 Wang Quan’an married actress Zhang Yuqi in a traditional style wedding in 2011. Last September he was arrested for soliciting prostitution.

The Chaoyang District has flourishing commerce. It has always been stars’ and celebrities’ favorite place to live. Most famous media and entertainment companies are concentrated here too.

What’s known as Beijing’s awesomest parking garage is the one underneath the Yintai Center in Chaoyang. It is said that two of the world’s five Pagani Zondas are in that parking lot, each costing RMB 60 million. There are also so many Rolls Royces, Bentleys, and Ferraris there that one sighting won’t even make a scene. Here, Benz, BMW, and Porsche only qualify as diaosi.

Pengpeng: Paipai, which car is yours?

Paipai: All of them. 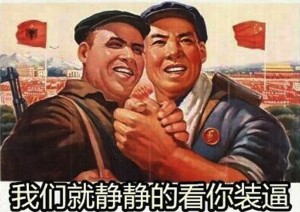 “We quietly watch you be a poser.”

This concentration of money and prestige inevitably attracts all kinds of people. In the vanity fair, there are men of noble character, petty people with bad intentions, and ordinary people with terrible plans. As people joke and drink together, the poisonous cancers of pornography, gambling, and drugs come uninvited, stirring up the lives of the stars in Chaoyang.

Fortunately, we have the sharp-eyed masses. In times of peace, they are just ordinary aunties dancing in the square or uncles selling newspapers. They quietly guard every blade of grass and tree in the neighborhood. Once there is a rustle of leaves in the wind, they will rush to the telephone booth, change their clothes, transform into superheroes of justice, and save the stars who are sliding down into the abyss. 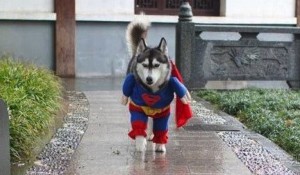 Stars often commit wrongdoings in Chaoyang, and they are often reported by the masses. The masses are limitless and elusive, but they also leave tracks to follow.

The old saying goes: It is easy to dodge an open attack, but hard to guard against an arrow in the dark. Many stars were reported by the “masses” around them. Wang Xuebing was reported by his friend, who provided his location to the sleuthing Chaoyang District Police Bureau. The police had been working to collect evidence of Wang’s use of drugs since February. The process of Huang Haibo’s arrest was even more complicated. The police nabbed a prostitute, and the prostitute gave Huang Haibo’s name.

The story of Huang Haibo tells us: if you have to pay for it, it isn’t true love! 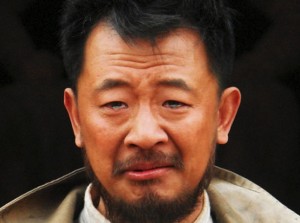 A teary-eyed Huang Haibo. The award-winning actor was detained in Beijing last summer for soliciting a prostitute.

Even if stars weren’t reported by those people close to them, it’s hard for them to dodge the discerning eyes of the masses. The political awareness of the Beijing people speaks for itself. If you’ve ever talked to a Beijing cab driver, you know this already.

The Beijing uncles and aunties with red arm bands have built-in LBS capabilities. They know all geographic info within a circumference of one mile, including supermarkets, farmers markets, and public restrooms. And of course they have info on all residents, too. The stars in the neighborhood are given even more attention. Who’s getting married, who’s pregnant, who’s going through a lawsuit—there’s nothing they don’t know. And they save the info in the “Beijing Uncles and Aunties Cloud” information-sharing system, in order to share that data with the uncles and aunties in other areas. 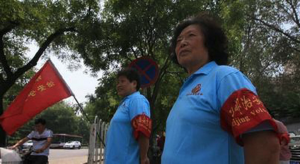 Stars are public figures. If they’re even slightly careless, they become focal points. Places like hotels have are filled with so many eyes—waiters, cleaners, and other guests can all become “informants.” They are not safe even their own homes—housemaids, water deliverers, neighbors, security guards, and others can also become the “masses.” And don’t forget about the almighty Teacher Zhuo Wei.

It seems that the stars dwell in an inescapable surveillance net. Nothing they do remains undiscovered.

How powerful are the masses? Last year between April and August, the Beijing Municipal Bureau of Public Security launched a targeted anti-drug campaign. Police broke 926 drug-related cases, amid which there were as many as 740 tips “reported by the masses.”

How many are among the masses? Also last year, there were 850 thousand Beijing Peace Volunteers on the streets, assisting the police in security patrols. And there were 100,000 people collecting intelligence for counter-terrorism.

Watch out for fire, theft, and nosy aunties. Beijing has the most zealous masses around. All depraved stars should be trembling in fear! [Chinese]