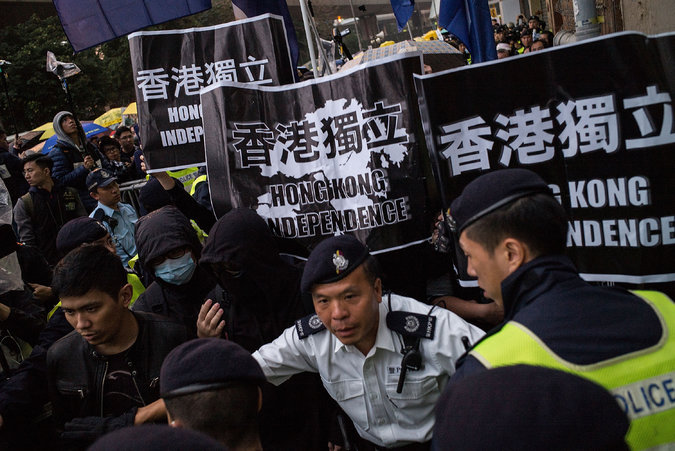 In a bi-annual report to the British Parliament, British Foreign Secretary Philip Hammond expressed serious concerns over the disappearance of Lee Bo, a Hong Kong bookseller and UK passport holder who went missing late last year and is currently held in custody by officials in mainland China. In the report, Hammond wrote that Lee’s apparent abduction by Chinese officials is a “serious breach” of the 1984 Sino-British Joint Declaration, a treaty meant to safeguard Hong Kong’s legal independence and freedoms. From BBC News:

The statement from Foreign Secretary Philip Hammond is the UK’s strongest comment so far on the case of Lee Bo.

[…] The UK had earlier expressed concern, but in his twice-yearly report on Hong Kong affairs, Mr Hammond said that while the full facts of the case were still not clear, “our current information indicates that Mr Lee was involuntarily removed to the mainland without any due process”.

“This constitutes a serious breach of the Sino-British Joint Declaration on Hong Kong and undermines the principle of ‘One Country, Two Systems’ which assures Hong Kong residents of the protection of the Hong Kong legal system.

Under Hong Kong law, Chinese police do not have jurisdiction in the territory.

It is the first time the UK has accused China of a “serious breach” of the 1984 Sino-British Joint Declaration, the document in which China promised to safeguard Hong Kong’s freedoms after the territory was handed back by Britain.

A Foreign Office spokeswoman said there was no legal provision to enforce a breach, but that the UK would continue to raise Mr Lee’s case with China. [Source]

The U.K. has been accused in recent months of putting its own foreign policy up for sale in the hope of securing a “golden relationship” with China, downplaying criticism over human rights and Hong Kong in the process.

Chris Buckley at The New York Times reports that Chinese authorities have dismissed Hammond’s report and urged the British government not to interfere with Lee’s case, which China considers a domestic affair.

On Friday, a spokesman for the Chinese Ministry of Foreign Affairs rejected the British report as “irresponsible carping and finger wagging.”

“We state our strong dissatisfaction and adamant disapproval of this,” the spokesman, Hong Lei, said in comments issued on the ministry’s website. He said Britain had no grounds to comment on Hong Kong.

“Hong Kong affairs are a domestic issue for China,” Mr. Hong said, “and no other country has the power to meddle.” [Source]

Lee Bo is one of five publishers and booksellers being held for investigation by mainland authorities. All five men have ties to Hong Kong’s Mighty Current publishing company and the associated Causeway Bay Bookshop that market books critical of China’s Communist Party leaders. Richard Connor at DW reports:

Lee is among five men, with links to Hong Kong’s publishing company Mighty Current Media and its Causeway Bay Bookshop, who have been detained in recent months.

All five later turned up in mainland China, with activists accusing Chinese authorities of snatching and removing them from Hong Kong by force. Such actions would contravene the laws of the semi-autonomous city – formerly a British colony. The “One Country, Two Systems” agreement on Hong Kong’s post-colonial status forbids Chinese police from operating there.

[…] Lee’s colleague Gui Minhai disappeared from Thailand in October, and last month appeared on Chinese state television confessing to a decade-old fatal drunk driving accident. The three other men were last week said to be being held on the mainland for an investigation into unspecified “illegal activities.”The disappearances prompted protests by activists on the streets of Hong Kong last month. [Source]

At Hong Kong Free Press, James Pomfret writes that the disappearances have not only created diplomatic tensions but also raised serious questions about the Chinese government’s commitment to Hong Kong’s autonomy.

China’s reluctance to provide information and its refusal to allow British and Swedish envoys access to Lee and Gui – a breach of international conventions – is fuelling a diplomatic crisis, several senior diplomats told Reuters.

[…] The case has raised concerns among Hong Kong’s large number of ethnic Chinese who carry foreign passports, and the apparent inability of foreign governments to get access to them should they get into trouble with China. There are now around 3.7 million British passport holders in the city of 7.2 million.

“We urge the authorities in Hong Kong and Beijing to take the necessary steps to maintain confidence in the system and the sanctity of the rights, freedoms and values it upholds,” wrote Hammond. [Source]

Hong Kong’s localist movement has tapped into public resentment over China’s social, economic, and political influence in the territory; protests over the police’s removal of street food vendors erupted in violence on Lunar New Year.