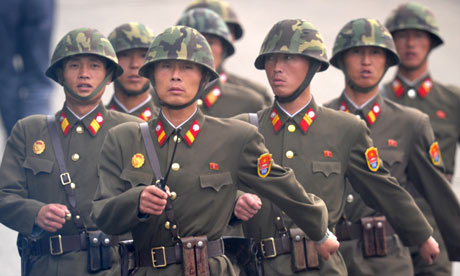 At Reuters, Ben Blanchard and Michael Martina report that China’s projected defense budget this year is expected to increase by at most eight percent compared to last year, making it China’s lowest increase in military spending since 2010. This comes amid a “tectonic” overhaul of the armed forces as China continues to feel an economic slowdown, with GDP growth last year a 25-year-low of 6.9 percent.

Fu Ying, spokeswoman for China’s parliament, said the figure would increase by about seven to eight percent from 2015, following a nearly unbroken two-decade run of double-digit budget increases.

China’s military build-up has rattled nerves around the region, particularly because China has taken an increasingly assertive stance in its territorial disputes in the East and South China Seas.

[…] “One simple reason for the lower increase is that double-digit growth is now harder to sustain,” said Bonji Obara of the Tokyo Foundation think-tank and a former military attaché at Japan’s embassy in Beijing.

“But another reason is that China’s anti-corruption campaign means less money is being siphoned off and spending has become more efficient,” he added, referring to President Xi Jinping’s vigorous efforts to root out graft.

The defence budget had been widely expected in military and diplomatic circles to log another double-digit increase.

Fu said the budget was based on national defence needs, the state of China’s economy and the performance of its fiscal revenues. [Source]

At his blog, China military expert Andrew S. Erickson offers the “bottom line and key takeaway” from this news: “Beijing’s latest defense spending figure shows that it is determined to avoid succumbing to Soviet-style military overextension, yet remains focused on enhancing capabilities to further its contested island and maritime claims in the East and South China Seas.”

A recent report from Xinhua quoted a senior military official calling for enhanced anti-corruption measures to apply to the army. In 2014, Xi’s ongoing corruption purge fell retired Central Military Commission Vice-chairmen Guo Feixiong and Xu Caihou (whose death last year was ordered out of the media spotlight), and Xinhua’s report noted the need to “root out any negative influence” of theirs that could remain.

Analysts say that the projected increase likely doesn’t include compensation for a 300,000 troop cut announced by Xi late last year as part of his PLA overhaul. At the South China Morning Post, Minnie Chan reports that spending on the construction of South China Sea facilities could also fall under a separate budget:

The budget announcement came after military experts and officials said the army needed a 20 per cent budget increase this year to cover its modernisation programme and challenges in the South and East China seas. It also needed the extra funds for retirement and redundancy pay.

[…] On Thursday, Lieutenant General Wang Hongguang, former deputy commander of the Nanjing Military Command, said the army needed at least 100 billion yuan (HK$118 billion) to cover costs associated with the personnel cuts. China is trying to modernise its military by regrouping its military commands and building up facilities in the South China Sea, raising expectations that Beijing would announce a substantial increase in the defence budget this year.

[…] Some of the South China Sea facilities could also be classified as civilian or maritime infrastructure as part of the “One Belt, One Road” project, he said. [For more on this initiative, see prior CDT coverage.] [Source]

The Washington Post’s Simon Denyer points to op-eds from the Global Times arguing for more spending and weapons deployment in the South China Sea, and quotes a military expert on how the surprisingly low budget could partly be a move to dampen regional anxiety over territorial disputes:

Nationalist tabloid the Global Times had argued this week for double-digit growth in military spending, and called for China to deploy more weaponry to the South China Sea in response to what it said was Washington’s growing military presence there.

Ni Lexiong, a professor of political science and a military expert at Shanghai’s University of Political Science and Law, said he had expected an increase of 12 to 15 percent in response to rising regional tensions.

“Obviously it shows that China wants to demonstrate to the West, including the U.S. and the neighboring countries that it has disputes with, that China sincerely wants to solve the problems through peaceful means,” he said. “But the second reason is that China’s economy is bad indeed.” [Source]

In 2011 to 2015, China’s arms imports fell 25 percent compared with the previous five year period, signaling a growing confidence in the country’s homegrown weaponry despite key areas of weakness, the Stockholm International Peace Research Institute (SIPRI) said in a report on global arms transfers.

Chinese exports of major arms, which excludes most light weaponry, grew by 88 percent in 2011-2015 compared to the earlier five-year timeframe, SIPRI said.

The country still accounted for only 5.9 percent of global arms exports from 2011-2015, well behind the United States and Russia, by far the world’s two largest arms exporters. [Source]

At the Independent, Ashley Cowburn reported that many of Beijing’s increasing arms exports are going to African countries:

According to the London-based International Institute for Strategic Studies, in their new report the Military Balance, China has been making significant inroads into the African defence market, “reflecting the broader growth in Beijing’s influence and investment

Using an analysis of the exports into 51 countries on the continent the IISS determined that 68 per cent of them currently use Chinese military equipment.

[…] Amnesty International’s Arms Control Researcher Patrick Wilcken said to The Independent: “There’s been a long history of irresponsible arms supplies to African countries which have then ended up being used to commit dreadful atrocities.

“Chinese-manufactured weapons and ammunition have spread across the continent through illicit trade, and have been found in the hands of armed groups and government forces in places like South Sudan, Darfur and the Central African Republic.

“China – or any other arms exporter – must not send weapons where there’s a risk that they will be used to commit or facilitate serious human rights violations.” [Source]