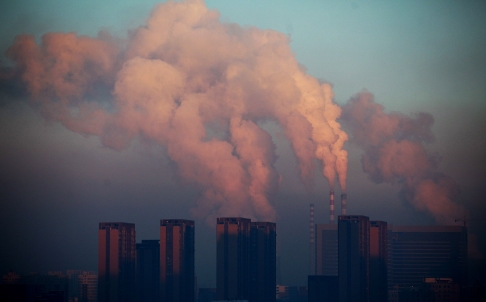 A new report from Greenpeace on the coal industry’s impact on global water resources has found that China’s appetite for coal power is exacerbating a long-running drought in northern China. The New York Times’ Edward Wong reports:

China’s coal-fired power plants consume more water where water is scarce than plants in any other country, according to the report, which assessed global water depletion from coal use.

[…] Greenpeace said the continuing burning of coal for power plants and factories in northern China, along with the growth of the coal-to-chemicals industry, is exacerbating the water crisis. In much of northern China, people are using water faster than it can be regenerated, Greenpeace said, “posing a serious threat to local ecology.”

At the end of 2013, China had 45 percent of the world’s coal-fired power plants, with a total installed capacity of 358 gigawatts, according to a summary of findings in the 60-page report, “The Great Water Grab.” Nearly half of the plants were in water-scarce areas, and those had a total annual water consumption of 3.4 billion cubic meters, enough to meet the basic needs of about 186 million people, the researchers found.

[…] Across all of China, coal-fired power plants consume 7.4 billion cubic meters of water each year, enough to meet the needs of 406 million people, or about 30 percent of the nation’s population, according to the report.

Plants proposed for construction would worsen the problem, the report found. Half of those plants, which would have a total installed capacity of 237 gigawatts, would be built in water-scarce areas. They would consume 1.8 billion cubic meters of water, equal to the annual needs of 100 million people, the report said.

“In China, an overlapping of rich coal reserves, water scarcity and fragile ecosystems makes the problem especially pronounced,” Harri Lammi, a Greenpeace senior global campaigner on coal, said in a written statement. “Yet China continues to expand coal power plants in these regions. This must be halted.” [Source]

Northern China has long suffered serious drought, and the massive and ongoing South-to-North Water Diversion project has raised environmental concerns of its own, not to mention social concerns surrounding population displacement in the wake of construction. While coal consumption has fallen slightly in recent years (2.9 percent in 2014; 3.7 percent last year, though the validity of China’s coal use statistics have been questioned) amid both a stalled economy and central government pledges to curb greenhouse gas emissions, the country is still the world’s largest producer and consumer of coal.

Last year the central government gave a green light to 210 new coal-fired power plants, which Greenpeace had previously warned would significantly up emissions and water stress. At Quartz, Zheping Huang focuses in on the new Greenpeace report’s findings on China in global context:

[…A] quarter of [globally] existing or proposed coal plants are or will be located in regions where water is being used faster than it is being replenished naturally—what Greenpeace calls “red-list” areas. This means there is not enough water left for the area’s ecological needs, including sustaining ground vegetation and flushing out pollutants in rivers in those regions, the report said.

The water/coal conflict is worst in China. Nearly half of China’s existing and proposed coal plants are in red-list areas, the report found. “China is facing a resource dilemma—wherever it has coal, there is often limited water,” the report wrote. India ranks the second on both lists, with 24% of existing coal plants and 13% of proposed ones in “red-list” areas.

The Kuye River, a tributary of the iconic Yellow River in China’s eastern region, for example, faces a water crisis thanks to its rich coal resources, the report found. In fact, there is a large gap between the amount of water available and the amount necessary for current industrial planning. By 2030, the water demand in the Kuye River basin is expected to increase to 416 million cubic meters, a significant proportion of that related to coal, but the water supply is only at 202 million cubic meters, the report said. China is already diverting more than 44.8 billion cubic meters of water across the country every year, more than there is in the River Thames, to deal with water scarcity.

Canceling the planned coal plants in the red-list areas and replacing them with renewable energy such as solar cells and wind power is necessary to avoid a crisis, Greenpeace says. In China, for example, this could mean saving a water consumption of 1.8 billion cubic meters per year. [Source]

As China struggles with its own water crisis, it recently released a surge of emergency water to downstream Mekong countries who are currently struggling with serious drought. This act of “water diplomacy” was seen by some as an effort to build goodwill with nations opposed to Chinese infrastructure projects ahead of the Lancang-Mekong Cooperation summit in Hainan this week.