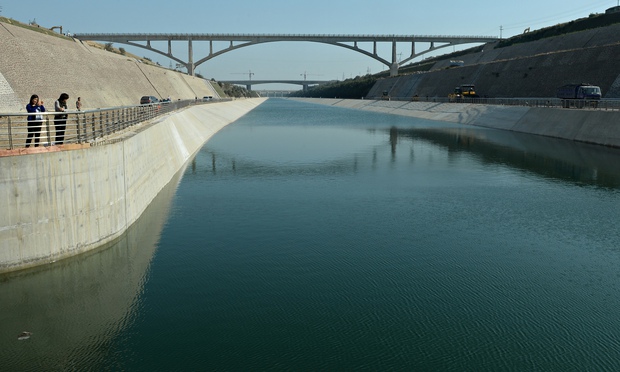 After a decade of construction, the middle route of China’s South-to-North Water Diversion Project began sending water towards Beijing on Friday. The three-phase project aims to deliver trillions of gallons of water each year from the Yangtze River thousands of kilometers northward to the arid, industrialized, and rapidly desertifying north. Supposedly conceptualized by Mao Zedong in 1952, construction for the project began in 2002, and has so far cost nearly US$80 billion—making it one of the most costly and largest engineering projects in world history. Reuters’ Ben Blanchard notes lingering environmental concerns revealed after the first phase of the eastern route began operation last year:

The first stage of China’s south-to-north transfer brought water to the industry-heavy northeast, but it was barely useable when it reached Tianjin because it picked up pollutants and sediment while flowing north through polluted soil.

That has raised concerns about the latest phase – a decade in the making – bringing water via a different, less polluted route.

Some experts have also voiced concern that the project’s extensive tapping of water from the Yangtze River and its tributaries may damage one of China’s most important water ways. [Source]

An attempt to ease the challenges of the nation’s severe water crisis, the project is as controversial as it is ambitious: aside from environmental concerns and arguments that building an answer to a severe water shortage will in the end prove impossible, construction has already displaced over 300,000 villagers. A report from Jonathan Kaiman at The Guardian provides details on all three phases of the project, and looks into havoc both drought and project construction has brought to villagers’ lives:

[…] The project, officials say, will save China from a water crisis that could set its development back years.

It has also destroyed Wang Yanhe’s life. Wang was born near the Danjiangkou reservoir in 1979, married young and had two children – the family lived between a small stream and a leafy hillside, and grew a variety of grains. In 2009, seven years after the project was approved, officials informed him that the reservoir’s water levels were rising and that his village would be submerged. About 345,000 villagers have been displaced by the project to date, and Wang soon became one of them. The government gave him a home in the Heba New Migrant Village by a dusty highway in rural Pingdingshan, a coal-rich municipality in neighbouring Henan province whose name translates to “flat mountain”.

Then came the drought. This summer was Pingdingshan’s driest in 63 years – Wang’s corn crop only grew to knee-height, forcing him to abandon his harvest. “Nothing is as good as before,” he said, chain-smoking cigarettes in his concrete-floored living room. His roof leaks; he can’t speak the local dialect. Officials promised him 0.2 acres of land, but only gave him 0.15. “After we arrived, we realised that the land was all dry,” he said. “So it doesn’t even matter what they promised us.” […] [Source]

An editorial from the Global Times acknowledges controversy surrounding the project, determines that “the positive effects overwhelm the negative ones,” and urges clearer national foresight in tackling environmental concerns:

Of course, this project is not just a matter for praises. It should also serve as a warning of China’s embarrassing water resource situation.

North China is not that naturally short of water resources. The crisis is more a result of the population density and the heavy use of water for living and business uses.

We hope the water diversion is only to solve the emergency of the north’s water shortage, not a signal that the north can still squander precious resources in its industrial and urban expansion. The north must be determined to establish higher water use efficiency.

China should not only solve the problems of the moment, but needs to look ahead. [Source]

Drawing the News: Li Keqiang on Scene at the Yangtze