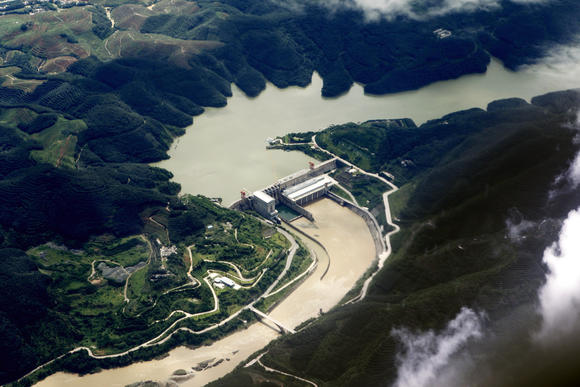 The emergency water supply from the Chinese Jinghong hydropower station will last one month from March 15 until April 10, marking the first time China has informed downstream countries in advance of its water-discharge schedule, said Nuanla-or Wongpinitwarodom, director of the Mekong River resources management office at the Department of Water Resources.

China had sent letters to all four member-countries of the Mekong River Commission (MRC) of its water-discharge plan to help ease the shortage of fresh water in downstream countries. The MRC consists of Thailand, Laos, Cambodia and Vietnam, while China and Myanmar are dialogue partners.

China has never before informed MRC countries of its water resource management plan, she said, adding Chinese authorities also had expressed an intention to work more closely with downstream countries to solve their problems.

“Previously, we only learned of changes in the water level when told by residents in Chiang Saen [which borders Laos and other neighbouring countries],” said Nuanla-or. [Source]

This move comes ahead of the Mekong River Commission summit beginning March 23 in Sanya, Hainan. the MRC consists of member nations Laos, Thailand, Cambodia, and Vietnam; China and Myanmar are dialogue partners. Asia’s 7th longest river, the Mekong begins on the Tibetan Plateau, and flows through Yunnan to Myanmar, Laos, Thailand, Cambodia, and Vietnam. A separate editorial from The Nation notes that while Bangkok and Hanoi praised Beijing’s move, rising water levels from the emergency supply also pose a challenge for those living along the river; the editorial also outlines the expected agenda of the summit, and calls on Thai Prime Minister Prayat Chan-o-cha to “take a stand on Thailand’s best interests” while in Hainan:

Vietnam greeted the announcement with grateful praise, as did the Thai government, but citizens of Southeast Asia who actually live along the Mekong were immediately alarmed by the potential for calamity in the rapid change in water level. The abrupt fluctuation in such a short period was bound to cause trouble for people who rely on fishing and tourism, as well as those growing vegetables along the banks, they warned. And indeed, water has inundated the south shore of the river in Loei province and elsewhere, confounding residents who earn a living from dry-season tourism.

Given that Beijing had never before informed the downstream countries of its plans regarding water-resource management, the letters sent this month to all four member-countries of the Mekong River Commission were most welcome, as was the effort to help in time of crisis. The extremely short notice, however, resulted in problems that had perhaps not been foreseen.

China and Myanmar are dialogue partners to the Mekong Commission, which has Thailand, Laos, Cambodia and Vietnam as its members. As the sole international body handing planning and issues that arise along the river, it has made several attempts to recruit China as a full member so that there are no gaps in the regulation of activities.

Now the leaders of all six riparian states are preparing to meet in Sanya on the resort island of Hainan off China’s southern coast. It’s their first “summit”, although the delegations are familiar with one another from meetings of the Greater Mekong Sub-region and the Lancang-Mekong Cooperation, on which foreign ministers met in Jinghong, China, for the first time last November. The Hainan conference is considerably more comprehensive in scope, since the leaders can table any issues of concern. [Source]

All six countries last November signed the Lancang-Mekong Cooperation Mechanism, which laid the groundwork for closer Chinese engagement with neighbors in Southeast Asia over often controversial hydro projects on the Mekong. In February, Sebastien Biba reported on the landmark agreement  for Thethirdpole.net:

[…] Most striking is the inclusion of cooperation on water resources, an issue which has been far outside the remit of the GMS [Greater Mekong Subregion initiative].

In the past, where water resources have been the focus of cooperation – primarily through the Mekong River Commission (MRC) – China has been reluctant to become a member (although it has been a dialogue partner).

China is the upstream and most powerful country in many transboundary river basins. It has therefore been called an ‘upstream superpower’. In the Mekong and elsewhere, China has so far been disinclined to sign water treaties or set up river basin organisations.

[…] So what conclusions can we draw from this development?

Most importantly, this reflects the increasing importance and urgency Chinese leaders’ attach to hydropower and politics. […] [Source]

Biba continues to note that mainland Southeast Asia is a “key testing ground for China’s ‘peaceful development’ approach as well as its ‘One Belt, One Road’ initiative.” One Belt, One Road is China’s initiative for increasing connectivity and engagement with Central and South Asia, and a key indicator of Beijing’s desire to play a more assertive role in regional foreign policy.

While the emergency water release received praise for relieving drought conditions in Thailand from the Bangkok Post, Chulalongkorn University’s Thitinan Pongsudhirak argues that it was partly a goodwill effort ahead of the Hainan summit, and warns that China’s insistence on writing the rules of regional water management could significantly increase tensions in the region. From the Nikkei Asian Review:

[…W]hile the water release will spell some immediate relief for the drought-stricken region, it portends future geopolitical tensions between China and its southern Mekong neighbors. Having unilaterally accumulated political power by exploiting geography and manipulating natural waterways through the construction of a slew of upriver dams, China appears intent to set the regional water management rules as it deems fit.

[…]  China is essentially the giant neighbor ensconced at the river mouth. It can block the Mekong waterways at will. To date, it has completed six of 15 planned dams along the Mekong. The governments of countries in the lower basin, particularly those of Cambodia and Vietnam, are either too beholden to or dependent on Beijing’s generosity and policy decisions to cry foul too vocally. To be sure, Laos is the midstream country that has been constructing its own dams, largely financed by Thailand, which in turn buys the resultant hydropower. The Mekong dams are thus a mixed proposition, not simply representing China’s imposition of unilateral leverage and power over the rest.

[…] This is why the Chinese are keen to bring Mekong leaders to their LMC table. Beijing’s fivefold summit agenda spans connectivity, industrialization, border trade, water resource management, agricultural cooperation and poverty reduction. But beyond the promotional photo shoots and work plans, the LMC concept symbolizes China’s shrewd effort to establish its own rules and institutions.

[…] For China, blocking off the water for its own benefit and then feigning benevolence in offers to share it with those further downstream yields short-term bargaining chips. But eventually, China’s myopic approach of playing by its own rules and disregarding those of other parties may boomerang back. […] [Source]

For substantive, data-driven coverage of Asia’s water crisis (and often, China’s role within it), stay tuned to Thethirdpole.net.