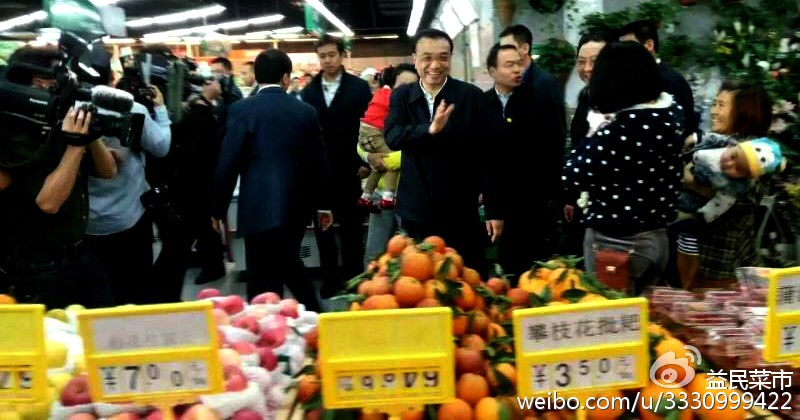 Premier Li Keqiang has taken a less prominent role than his predecessors, but has made more public appearances since last year. He has just wrapped up a three-day visit to Chengdu, complete with a badminton match against a robot at Jingrong Makers Town in Pixian County. But what stunned netizens was Li’s televised trip to the Yimin Vegetable Market, where the prices on produce were too good to be true.

Stills from the televised visit appeared to show cherries priced at 3 yuan per jin (500 grams) and loquats at 3.50 yuan per jin. Discerning netizens found that the decimals had been moved, so that what appeared to cost 3.00 yuan was initially written “30.0”—cherries, it turns out, are actually 30.00 yuan per jin. Li Keqiang didn’t get such a steal on produce, after all. (Source: Yimincaishi (@益民菜市)/Weibo) “My Grandma went shopping at Yimin Vegetable Market early this morning and brushed shoulders with Premier Li. Everything was half-price,” one netizen posted on her WeChat feed, as captured in a screenshot posted to CDT Chinese. “She couldn’t believe her eyes, and she hated that she wasn’t strong enough to carry more. At checkout she got VIP treatment. Staff helped her pack up. Grandma is really excited (see photos) and says it’s too bad she forgot her cell phone. But I want to ask, is it good to fool the premier like this?”

In an article posted to Weibo this morning, Yimin explained that netizens had misperceived the prices because “the images shared online are relatively blurry.” Judging from the comments, Yimin has hardly cleared up the matter:

@helita: How is it that this batch of people can’t see right? Are they good for anything?

Xiaochandainiyouchuancang (@小婵带你游川藏): As soon as the premier left they changed the price boards [Chinese]

After a 7.0-magnitude earthquake shook Sichuan and Yunnan, Li Keqiang was photographed eating instant noodles in a tent near the epicenter. Netizens mocked him then for “putting on a show.”