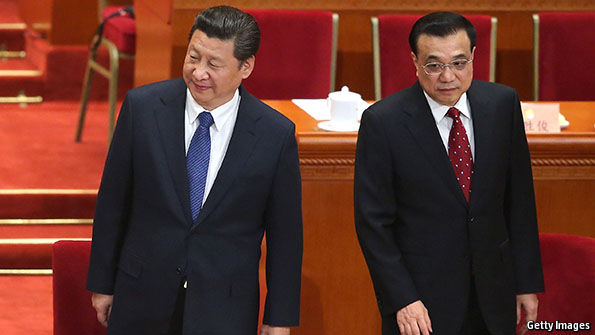 Chinese Premier Li Keqiang, who holds postgraduate degrees in law and economics from Peking University, is viewed by many as a capable steward of the economy with reformist ambitions underpinned by a liberal scholastic background. Yet, compared to many of his predecessors, Li works largely in the shadow of the president, Xi Jinping, who has subsumed the premier’s role in the economy by taking charge of key decision-making on economic policy. From The Economist:

Mr Li […] is more marginal than his forerunners. This was apparent during the summer, when neither he nor other leaders publicly explained the decision to intervene in the stockmarkets. In April the Financial Times quoted Mr Li as saying that China did not want to devalue the yuan—four months before it did so. When world markets plummeted in response to the unexpected fall of the yuan, Mr Li talked in generalities rather than commenting on the issue. As for limb-cutting reforms, despite some encouraging moves in the financial sector and talk of more involvement by private firms in industries hitherto dominated by the state, little blood has been drawn.

[…] Within months of Mr Li’s appointment in March 2013, rumours began circulating that he had been sidelined. The prime minister has been allowed to tinker with some experiments—such as the Shanghai Free Trade Zone, which opened in September 2013 to much fanfare but disappointing effect. His grander schemes to boost urbanisation and reform the hukou system, China’s restrictive household-registration policy (see article), have made unimpressive headway.

Since assuming power Mr Xi has pushed Mr Li to one side and taken direct oversight of economic policy. In December 2013 he created a new committee, the Central Leading Group for Comprehensively Deepening Reform—and put himself in charge of it. He also chairs the Central Leading Group on Financial and Economic Affairs, which commissions research and makes policy. Mr Li probably approved the intervention in the stockmarkets, but the decision was mostly likely taken by Mr Xi’s financial leading group. The prime minister was excluded from the drafting of Mr Xi’s flagship economic reforms, which were endorsed by the party’s Central Committee in November 2013. He is similarly unlikely to have been heavily involved in drawing up a new five-year economic plan, which the Central Committee will approve at its four-day annual meeting beginning on October 26th. [Source]

Compared to the flood of propaganda about Xi Jinping—which has included popular music videos, a mobile application, and an imminent TV miniseries—China’s state media has focused much less attention on Premier Li Keqiang. President Xi’s monopoly on state media coverage is, however, being challenged as the premier seeks to claim more of the limelight. At China Real Time, Russell Leigh Moses reports:

In the past week, following a winding-down of extensive coverage by Chinese media of Xi’s visit to the U.S. and the United Nations, news outlets have shifted and given strong play to Li’s recent tours and speeches. Li is being cast to cadres and citizens alike as someone deeply concerned with local conditions and eager to return to locations he visited previously to see what progress has been made and what problems remain. According to this narrative, he is unafraid to push for further change and hold officials accountable for their failings.

From a trip to visit farmers in Henan province (where he was portrayed as “an expert in agriculture”) to extensive coverage over the past weekend where Li was presented as the leader responsible for calling attention to the squalid conditions of workers and migrants in major cities in China–and given credit for their subsequent improvement —Li is being depicted in much of the Chinese media as the more hands-on leader, spending time tackling problems at home instead of burnishing China’s image abroad.

[…] Li’s efforts to reclaim some of the leadership on policy he has lost were especially conspicuous last week, when the website of the party’s official People’s Daily newspaper ran an unusual story about some of the inner workings of China’s State Council, a major policy-making institution.Such articles appear very rarely in the state-controlled media, given the secretive nature of policy-making in China.But the account was less about the Council than it was about Li Keqiang’s leadership style, which came in for high praise. According to the article, Li produces “decisions that reflect unwavering will and determination.” […] [Source]