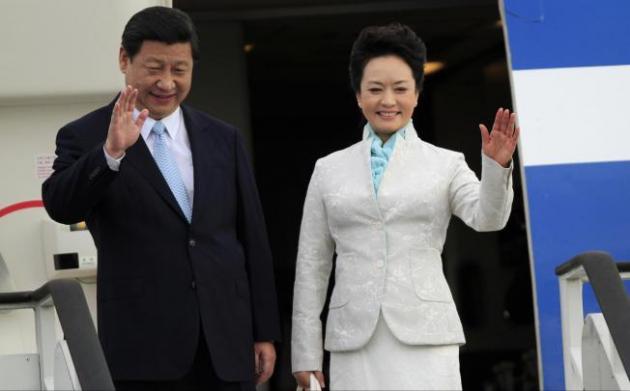 Xi Jinping is so far enjoying much popularity among the public, thanks at least in part to a series of image-crafting campaigns portraying the charismatic president as a fatherly figure and a man-of-the-people. Now, the South China Morning Post’s Keira Lu Huang reports that a netizen-made music video honoring the love between Xi and his wife Peng Liyuan has gone viral online:

“Xi dada loves Peng mama, love like theirs is a fairytale. Peng mama loves Xi dada, a world with love is the most powerful,” lyrics of the internet sensation go.

Since four Henan men posted the music video online on November 18, it has received more than 20 million hits.

[…] Online comments have pointed out that these lines resemble those from the well-known song about Mao Zedong called The East is Red, with its lyrics: “The east is red, the sun is rising, China now has Mao Zedong.”

“We have thought about making a song like this for some time. So when we were making this, it reflected our true feelings,” a writer of the lyrics, Song Zhigang, told the Daily.

[…] The musicians said the number of internet hits has encouraged them to write more songs with positive energy, the newspaper reported. [Source]

State media has done its part to promote the music video with English- and Chinese-language coverage. The four Xi fans who created the song and video may have taken their lead from Xi Jinping himself—last month, after giving a speech at the Beijing Forum on Art and Literature on the artists’ responsibility to uphold Party ideology with their work, Xi praised the “positive energy” of controversial nationalistic blogger Zhou Xiaoping. This once again prompted comparison between Xi and his predecessor Mao Zedong, who himself defined the artistic responsibility of the Chinese socialist at the Yan’an Forum on Art and Literature in 1942.

In an op-ed for the New York Times, writer Murong Xuecun recaps Xi’s speech last month in Beijing, notes that recent publications have lent the president literary clout, and offers a dim forecast on the implications for Chinese art and literature:

And he made clear where artists stand in his China: Artists should implement “the party’s policies on the arts.” Artists should not “lose themselves in the tide of market economy nor go astray while answering the question of ‘whom to serve.”’

[…] In a country like China, even casual remarks by the top leaders have an unsurpassable authority. Mr. Xi’s enthusiasm can spark new trends in Chinese letters, his criticism can mold the entire field of literature.

Few people question whether Mr. Xi has the credentials to tell writers what to do. In the past few months, he has become the best-selling author in China, perhaps even in the world. His book “New Sayings From Zhijiang,” a collection of newspaper columns based on Communist Party dogma that he wrote in the early 2000s when he was secretary of Zhejiang Province, shot to the top of the charts after his elevation to the presidency in 2012. Two follow-up books have done even better.

[…] Censorship is the greatest obstruction to the flourishing of writing and the creative arts. Rather than engaging the Chinese people about creative expression, Mr. Xi is just laying down the law: “Your writing must be patriotic;” “you must honor our glorious cultural traditions;” literature and art must not be contaminated by “the stench of money.”

[…] In the coming years, even if Chinese writing and the arts can purge itself of the so-called stench of money, after this speech, the foul smell of Mr. Xi’s words will linger. [Source]

And Xi’s words could linger internationally, following the recent multi-lingual release of The Governance of China, a compilation of recent Xi speeches and interviews. State-owned China Radio International reports on “positive feedback” the English-language edition is enjoying in the UK:

A collection of 79 speeches and some 45 photos of the Chinese president, the book is meant to provide readers with firsthand insight to the Chinese leadership.

[…] “The Governance of China” was first introduced at this year’s Frankfurt Book Fair.

It’s since been published in ten languages, including English, French, Russian and Japanese.

“The book has attracted a lot of media attention since it was launched. On top of that, we’ve seen quite positive feedback from the market. For instance, you can find the book on almost all major amazon sites, and with decent sales figures.” [Source]