The Cult of Xi? 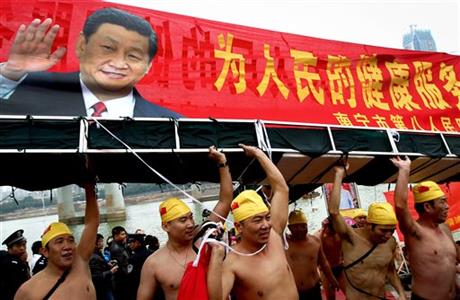 During his career as China’s President and Communist Party General Secretary, crackdowns on dissenting Party ideology, corruption, civil society activism, and liberal online voices have garnered Xi Jinping numerous comparisons to his notoriously heavy-handed predecessor Mao Zedong. According to a recent study [Chinese] by University of Hong Kong professor and China Media Project director Qian Gang, one thing Xi has in common with the late Great Helmsmen to a degree not seen in any other prior Party leader is incessant state media praise. The Washington Post reports:

[…] Among past leaders, Mao [Zedong] and Hua [Guofeng] were mentioned most frequently, unsurprising given the fervent state leader worship during their time. The cult of Mao, for example, reached its peak in the late 1960s, during which he was called China’s bright red sun and the great savior of its people. During the Cultural Revolution, he was branded “the great leader, the great supreme commander, the great teacher and the great helmsman.” His words were deemed infallible. Badges, busts and posters bearing his image were ubiquitous. Almost everyone carried a little red book that contained his famous quotes.

But when the chaos of the Cultural Revolution abated and Deng rose to power as the next paramount leader, he criticized the cult of personality and said it was not only unhealthy but also dangerous to build a country’s fate on the reputation of one man. In 1980, the party’s Central Committee issued directives for “less propaganda on individuals.” Party leaders have since continued to feature in propaganda and party-controlled newspapers but with less frequency and intensity.

According to Qian’s study, however, that trend against leader worship has eroded gradually over the years, with the change accelerating especially rapidly since Xi’s elevation in 2012. Xi’s name, for example, has been mentioned almost twice as frequently in party news articles as his two immediate predecessors and is catching up with Mao’s. In his first 18 months in power, Xi has been mentioned in 4,186 articles in the first eight pages of the People’s Daily, while Jiang and Hu appeared in less than 2,000 reports.

[…] Qian said the numbers suggest an intensification in propaganda exalting China’s top leadership position, but he cautioned in a phone interview that he is not trying to make any argument or interpretation about China’s prevailing political situation. He said his goal is merely to provide quantitative data for others to use in their studies of China’s opaque political system. […] [Source]