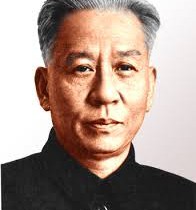 On Sunday, Xinhua reported the latest move in the Party’s current drive to fight corruption and ensure the ideological orthodoxy of its members: an Organization Department edict on “intense ideological education for officials to strengthen their faith in communism and curb corruption.”

Profound social-economic changes at home and abroad have brought multiple distractions to officials who face loss of faith and moral decline, said the Organization Department of the Communist Party of China (CPC) Central Committee in a statement.

The conviction and morals of officials determine the rise and fall of the CPC and the country, it added. Officials should keep firm belief in Marxism to avoid being lost in the clamor for western democracy, universal values and civil society, according to the statement.

[…] The authorities pledged to improve officials’ morals, calling on them to be noble, pure and virtuous persons who have relinquished vulgar tastes.

“Chinese officials should safeguard the spiritual independence of the nation and avoid becoming an echo of western moral values,” it warned. [Source]

China Copyright and Media has translated a fuller summary of the Organization Department’s ‘Notice concerning Strengthening Education on Ideals, Convictions and Moral Conduct in Cadre Education and Training’ from People’s Daily.

Purity and tasteful restraint have recently been promoted with proclamations against adultery—defined by the Central Commission for Discipline Inspection as keeping at least three mistresses—and the use of status-laden official vehicles and chauffeurs. Two weeks ago, meanwhile, a senior official at the Central Commission for Discipline Inspection warned that loss of ideological discipline had helped bring down the Soviet Communist Party, with many members becoming “megaphones for broadcasting Western ideology.” Days later, the Chinese Academy of Social Sciences announced that ideological purity would be the foremost criterion for assessing its scholars, following accusations that it had been “infiltrated” by “foreign forces.” Zhang Ming, a political science professor at Renmin University, told the South China Morning Post that “the efforts to strengthen the ideological control on academics reflect the leadership’s overwhelming fears that communist rule in the country is under threat.”

At the University of Nottingham’s China Policy Institute Blog, Kerry Brown examined the question of Party members’ ideological rectitude in terms of Liu Shaoqi’s 1939 essay ‘How to be a Good Communist’ and Xi Jinping’s current corruption crackdown.

[…] Party members, [Liu] says, have to observe the proper ideology, they have to straighten out their thinking and see they are in a moment of revolutionary transformation and struggle in which they are the vanguard fighting against oppressive forces. ‘We Communists,’ he writes, ‘are the most advanced revolutionaries in modern history; to day the changing of society and the world rests upon us and we are the driving force in this change. It is by unremitting struggle against counter-revolutionaries that we Communists change society and the world, and at the same time ourselves.’

China’s current elite leaders are unlikely to come out with a statement like this today. But the question of what makes a good, effective, loyal Party member and how to prescribe and measure their behaviour and inner loyalty is never far from their minds. In particular, one of the key themes that Liu addresses in his short book (in fact, he devotes a whole section to it) will certainly have resonance with them: ‘A Communist must be clear about the correct relationship between personal and Party interests’, Liu declares. ‘Personal interests must be subordinated to the Party’s interests, the interests of the local Party organization to those of the entire Party, the interests of the part to those of the whole, and temporary to long-term interests.’ This, in their world view, still stands true, and lies behind the particular energy of the anti-corruption campaign they are currently waging.

There are plenty of people inside and outside China who maintain a very consistent and deep cynicism about the motives behind political figures and their actions across the country, particularly at the elite level. In an odd way, though, I think this cynicism lets a lot of important realities about the position China and its ruling party are now in evade attention. […] [Source]

See more from Brown on this topic via CDT.