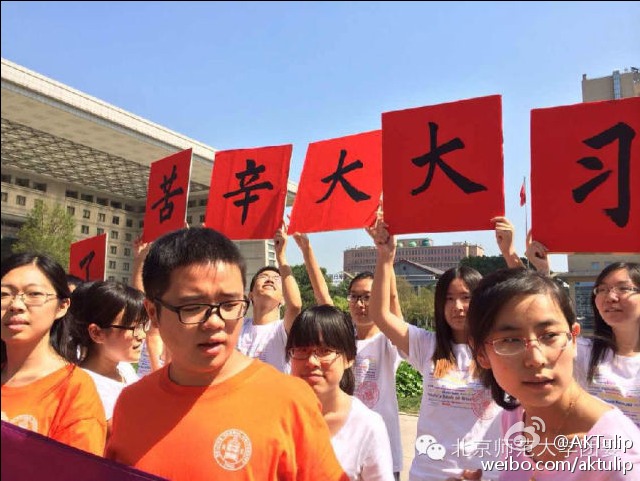 Xi Jinping’s career as China’s president and the Party’s highest official has been marked as much by his charisma as his administration’s heavy-handed efforts to consolidate political control and crackdown on dissent. Xi’s charm stands in stark contrast to that of his dry and stiffly bureaucratic predecessor Hu Jintao, and state media has been consistent in drawing attention to Xi as a man of the people.

While Xi does appear to enjoy widespread public support, his image-crafting campaigns have in the past created space for negative commentary on Chinese politics. His trip to a popular steamed bun restaurant late last year prompted petitioners to borrow some of the publicity; netizens poked fun at Xi for breathing with the people on an exceptionally smoggy day last winter. 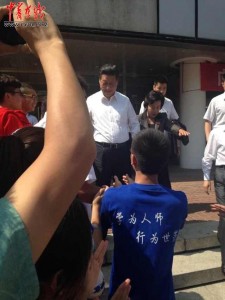 In celebration of China’s 30th Teachers’ Day this week, the president visited Beijing Normal University, where he called on teachers to “have lofty ideals, solid knowledge and a kind heart.” State media focused on the rockstar reception Xi enjoyed, when 500 students and teachers gathered in cheer. On Weibo, China Youth Daily reported students shouted slogans like “The Secretary-General has worked hard for us!“ (总书记辛苦了！). One teacher said Xi’s reception was like a “superstar concert.”

When one young teacher asked if he could address the president with the term of endearment “Daddy Xi “(习大大), Xi responded “YES” in English, and state media applauded.

Some netizens, however, were less impressed:

原乡记: Calling him “Daddy” is completely servile. But it doesn’t necessarily mean “father”–it’s also a way to put yourself down.

龙的精灵: Heh, the slaves have been working hard, too. Without you, there’d be no imperial power. Ha ha, I like seeing a sea of slaves.

The “daddy” (大大) in “Daddy Xi” comes from Shaanxi, the province where Xi’s father, Xi Zhongxun, was born. The same term can also mean “uncle,” but either way connotes familiarity and warmth.

Some netizens have pushed back against “Daddy Xi,” saying the Beijing Normal students “have everything but daddy” (五行缺爹 wǔxíng qūe dīe). This is a play on the idiom “have all five elements but earth” (五行缺土 wǔxíng qūe tǔ), describing the inauspicious state facing someone born without earth in their astrological sign. Such an unfortunate person must somehow incorporate earth into their life in other ways. Thus, to “have everything but daddy” implies slavish devotion or overcompensation.

AKTulip: If you don’t know what “daddy” means, look it up on Baidu. Shouting in the streets like this, do you have everything but daddy? 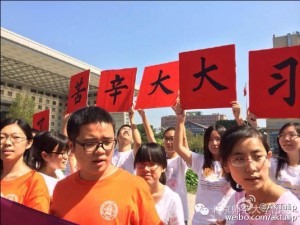 User 呵呵就是对二百五博主的最大鄙视 told everyone to “study hard” (好好学习 hǎohao xuéxí), using an education-focused idiom which can also be parsed “learn well from Xi” (好好学习 hǎohao xué Xí). This comment also recalls the “Learn from Xi Fanclub” on Weibo. The user posted photos of Xi on his travels, leaving netizens puzzled as to who would have such close access to the Secretary-General. In February 2013, AP interviewed a young migrant worker who claimed that the Learn from Xi Fanclub was his labor of love. He posted a farewell soon after, although the account remains active. Many doubted that a working class man in southwestern China could really be behind the account–it smacks of the Fifty Cent Party.

While “rock star” receptions may be staged, Xi’s publicity stunts and anti-corruption campaign appear to be working for the general public.