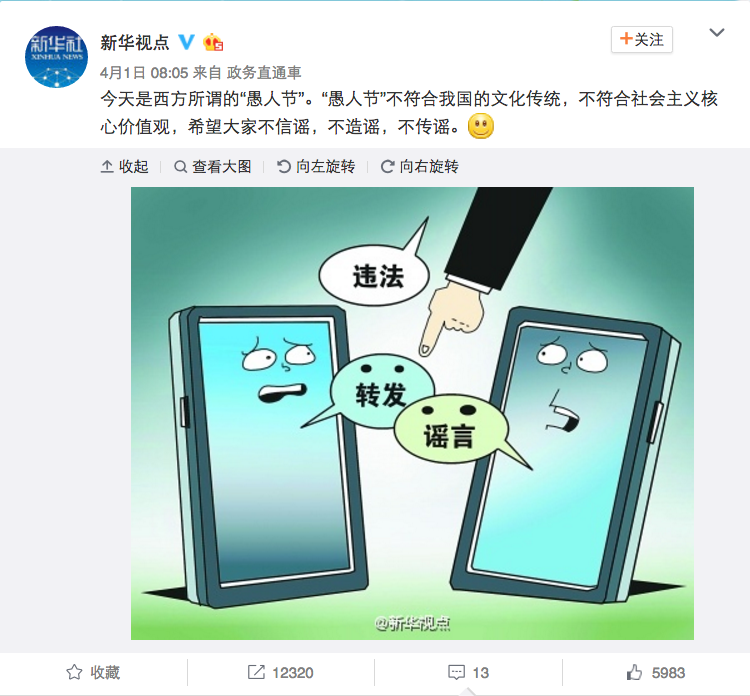 The occasion “does not conform with our nation’s cultural traditions, nor does it conform with the core values of socialism”, it added.

“Don’t believe rumours, don’t create rumours and don’t spread rumours,” it said, capping off the note with a smiley emoticon.

A cartoon accompanying the post showed two phones “spreading rumours.” A finger pointing at them is accompanied by a word bubble that says “breaking the law”. [Source]

The following is a screenshot of the Xinhua statement from Weibo: The post generated numerous reposts and commentary from Chinese netizens–many of which aimed at the Party and state media–before the story’s comment function was disabled:

ZhangJuejiangshigecanlandexiaopangzi (@张倔强是个灿烂的小胖子): Corruption does not conform with core socialist values either， so why is there so much corruption?

Wodehuqiuxiangnidie (@我的护球像你爹): If you read the newspapers, it’s like everyday is April Fools’ Day.

Dahaoshouzi (@大号瘦子): In fact, by following the right party, we can celebrate April Fools’ everyday. [Source]

The Washington Post’s Simon Denyer has more on netizen reactions to Xinhua’s announcement:

“This is Xinhua’s joke, don’t you see?” another wrote.

Others wondered if party-controlled China Central Television had received the memo.

[…] On Friday, one social media user had an ironic suggestion for party authorities.

“Today is April Fools’ Day in the West when you can publicly lie and not be punished. Why don’t we do the opposite and make this day ‘truth telling day’?” the user wrote. “Hopefully today we can speak the truth, express our true feelings, show our true colors, spread the truth without being restricted or punished, without getting blacklisted as inciting crime.” [Source]

Authorities launched a crackdown on online rumors, and revitalized the campaign in 2013. Following the release of new guidelines in 2013, Internet users can face up to three years in prison if the “rumors” they post online are shared more than 500 times or viewed by more than 5,000 people. More recently, the country’s criminal law was amended to include penalties for anyone convicted of spreading false information about disasters or other emergencies. At The Wall Street Journal, Mark Magnier and Lilian Lin look at the historical roots of Chinese rulers’ fear of rumors:

Xinhua’s admonition against rumormongering — whether amusing or not — echoes a tradition going back centuries, political historians say. Emperors often feared gossip, particularly in times of disaster, which could signal that the leadership no longer enjoyed a “mandate from heaven” to rule, they say.

Austin Ramzy at The New York Times writes that the Xinhua incident is part of an ongoing government effort to suppress the spread of Western ideas in Chinese society:

“No matter that socialism, democracy, rule of law are all modern phrases that came from the West,” wrote Li Fangping, a lawyer, on Weibo. “Isn’t it funnier that Xinhua, People’s Daily and China Central Television are all fooling us a little?”

[…] In recent years, the Chinese authorities have sought to curtail the influence of some Western ideas. The education minister, Yuan Guiren, laid out new rules in 2015 banning the use of textbooks promoting “Western values.”

Last month, the minister of civil affairs, Li Liguo, said the country would move to curtail “bizarre” and “foreign” names for buildings and residential compounds that “violate the socialist core values and conventional morality.” [Source]

Read more about the anti-Western values campaign and resistance to it, via CDT.