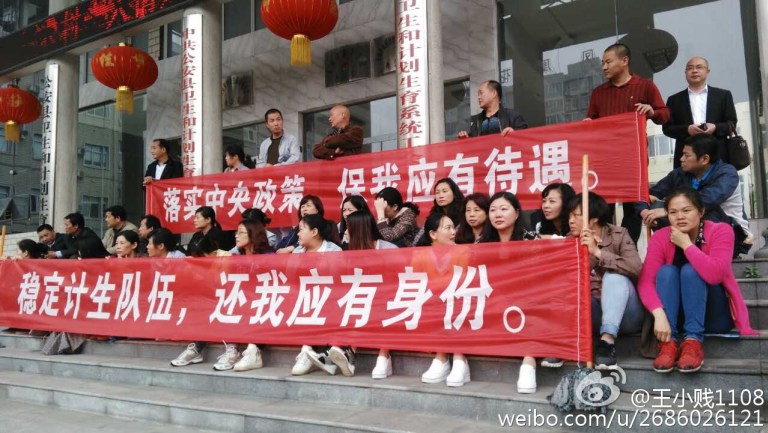 Family planning workers in Gong’an County, Hubei Province occupied the front steps of the county health and family planning building today, protesting for more respect for their occupation. They got just the opposite on Weibo.

The workers held red banners reading, “We fulfilled central policy, give us the treatment we deserve,” and, “We’re steady family planning troops, give us back our dignity.” Local family planning offices are notorious for using forced abortions and forced sterilizations to enforce the now defunct one-child policy. The specific circumstances that led to this protest are unclear, but the end of the one-child policy likely contributed. The 35-year-old policy was eased over the last few years, then transitioned to a two-child policy in October 2015.

Family planning workers protested for the “treatment” and “dignity we deserve.” (Source: Weibo)

Protesters shared photos and grievances on Weibo. One post that spurred an angry backlash has disappeared, but is archived at CDT Chinese:

Daweixiaoqiao_188 (@大卫小乔_188): I came to this battlefront at the age of 18. Back then, we were mobilized to take on this most difficult of work, and family planning cadres were highly regarded and dearly loved. This is how the Gong’an County Party government shows us “love and respect” now! Family planning is still basic national policy. It’s hard for the family planning troops to make a living. Reforms were originally intended to make our work more efficient, boost morale, and better serve the people. Now we’ve lost hope. How can we serve the people? (May 23, 2016) [Chinese]

Netizens replied that they are getting what they deserve. “I also want to serve the people,” says one commenter. “I’d take these people and plan their deaths, one by one.” Another writes, “Kill yourselves and make an even greater contribution to family planning.”

The violent enforcement of the one-child policy has enraged netizens before. In June 2012, Feng Jianmei was taken from her home to the hospital and induced to miscarry her seven-month-old fetus after she failed to pay the fine for having a second child. Graphic images of the mother and the stillborn fetus went viral on Weibo. The deputy mayor of her city later apologized to Feng and her husband, and suspended the local family planning officials who had essentially kidnapped Feng to the hospital. The officials had argued that they were fulfilling their duty to uphold national policy.

At the meeting of the China Family Planning Association in Beijing last week, President Xi Jinping asserted that family planning is a “basic national policy that must continue in the long term.”