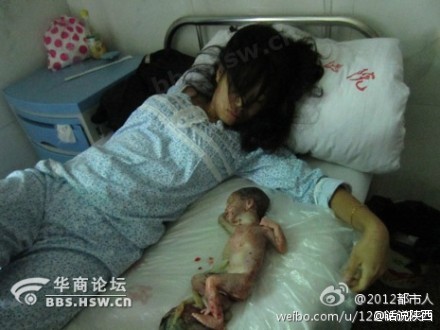 The story of a (WARNING: GRAPHIC) forced abortion in Ankang, Shaanxi has gone viral. On June 2, Feng Jianmei, seven months pregnant with her second child, was arrested, brought to the hospital and given an injection to induce labor after she failed to pay a 40,000 yuan (US$6,275) fine. She miscarried on June 4. Local authorities claim they acted within their rights to enforce China’s family planning policy, often called the “one-child policy.”

[UPDATE: The Deputy Mayor has apologized to Feng and her husband, and said local officials responsible for the abortion will be suspended.]

The gruesome story of Ms. Feng’s ordeal is currently the third most popular trending topic on Weibo, down from number one earlier today. The keyword search “induced abortion of seven-month pregnancy” (怀孕7月遭引产) is still the most popular, returning over 319,000 results. Graphic images of Ms. Feng and her aborted child have circulated widely.

A Weibo post on the case by the economics magazine Caijing has been reposted over 7,600 times and commented on over 2,806 times:

Caijing: Story of Forced Abortion Goes Viral; Local Officials Claim They Acted Lawfully: Without notifying anyone, a mother seven months pregnant in Ankang, Shaanxi was forcibly given an injection to induce abortion. The Family Planning Bureau of Zhenping County, Ankang claims that as the mother was illegally pregnant, local cadres persuaded her to undergo abortive surgery. The surgery was carried out on June 2 at 3:40 p.m. http://t.cn/zWP7fGd

Comments on the Caijing post show netizen outrage over this incident:

Yunyun: The flaws in the system killed this poor child before it even came into the world. I’m waiting for their judgement.
筠荺：哎，制度和体制的不完善杀死了这个还未出世的可怜的孩子，等待着遭报应吧

PeachHou: When foreign media said China doesn’t have human rights, I used to get really angry; but now I have to admit, we don’t!
侯桃子：以前外媒说中国没人权，我很愤怒；如今我不得不承认，我们确实没有！

SnowCity: Everyone already knows this kind of thing happens, so why is it only taking center stage now? The only way out of this is to start a two-child policy.
雪華之都：这是一直以来众人皆知的事情吧，为何今天才搬上台面说。开放二胎政策才是解决这个问题的出路。

chenxizhong: Whether or not this is real, the most despicable, most revolting, most inhumane, most unjust, most punishable national policy is none other than the one child policy! F*ck!!
chenxizhong：不管真假，最恨最恶心最无人道最无天理最遭报应的国策就是计划生育，擦！！

VastLand: This is what Sunglasses was talking about but was powerless to stop. Our country is run by animals!
森海雪域：墨镜在的话，也无能为力，畜生当道！

The activist lawyer Chen Guangcheng, recently arrived in the U.S., was punished with seven years of jail and illegal house arrest for fighting just such coercive enforcement of the one-child policy in his native Linyi, Shandong. Yesterday, the Internet curator SneezeBloid posted another chilling tale of forced abortion in a different region of Shandong:

The Catastrophe of 1991: Weibo user @LiPeixun says, “Do you know about the slaughter of the lambs in Guan County, Shandong? I had a look on Baidu. In 1991, the county launched the ‘Childless Hundred Days’ campaign. All pregnancies were forcibly aborted, regardless of whether the mother was obeying by the one-child policy. You were even supposed to kick pregnant women in the stomach. Shen County followed suit and ‘enjoyed success.’ Ours is the only country in the world with this fundamental policy of ‘suicidal infanticide.’”

Screenshot of a Baidu search for the “Hundred Childless Days.”

AuthorChenLan: In the last thirty years, pregnancies, even of women about to give birth, have been legally terminated with poisonous injections. Ignorant parents are encouraged or forced to undergo illegal ultrasounds, and if the fetus is female it’s aborted. This is murder on a scale unprecedented in human history, murder committed in the safest place in the world. Crying mothers are beaten black and blue. History will repay us. Our generation will have one thousand years of shame for the Auschwitz of the womb.

Mara Hvistendahl’s book Unnatural Selection addresses the social consequences of sex-selective abortion and female infanticide, with an emphasis on China and India.