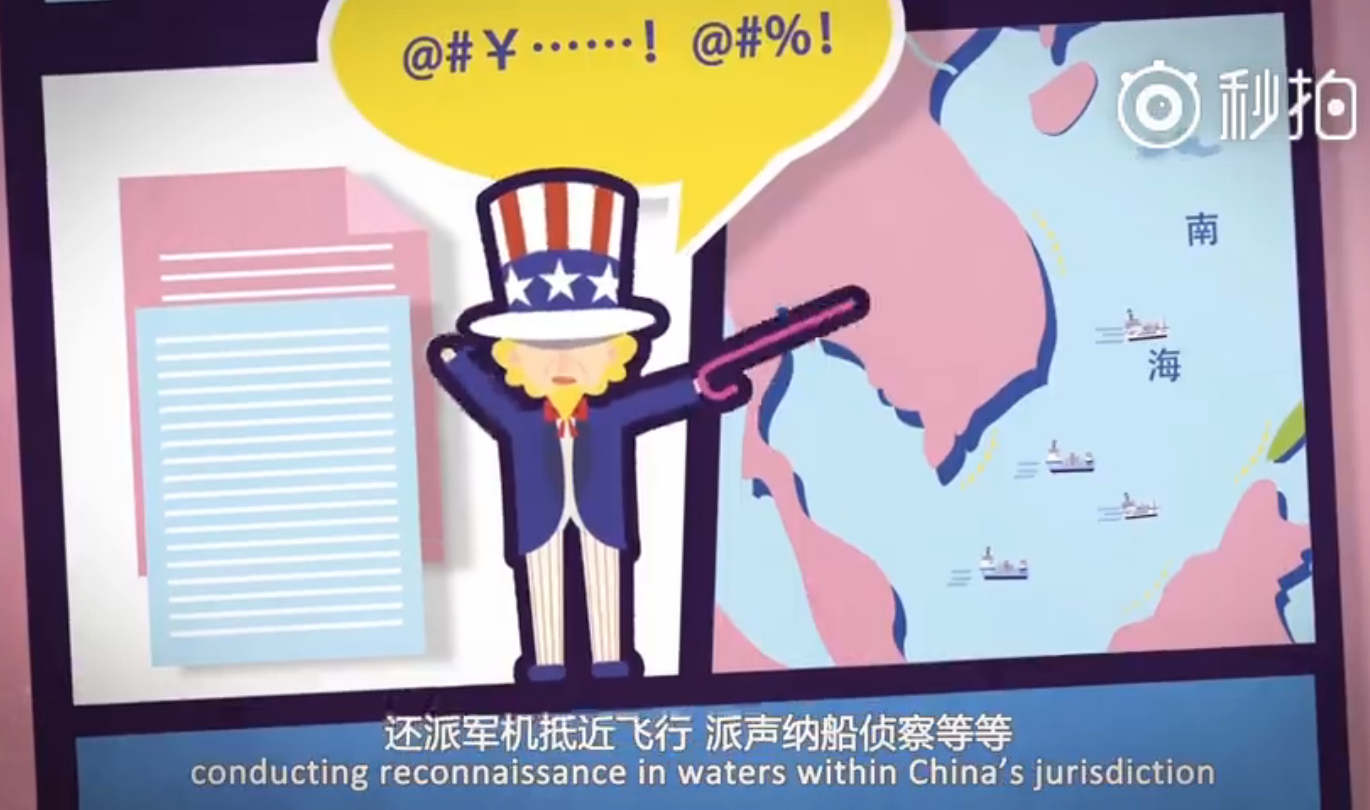 With the international court in The Hague expected to rule on China’s contested claims in the South China Sea any day, and as Beijing and Washington engage in a game of naval chicken in the maritime region, state broadcaster CCTV has released “Who is Stirring Up Trouble in the South China Sea,” an English-subtitled animation, to drum up support for its case. Full of all the “positive energy” that has come to characterize state propaganda in the Xi Jinping era, the three-minute animation highlights the trade importance of the South China Sea and Beijing’s efforts to ensure it remains “safe and free,” outlines China’s historical claims to sovereignty, and lashes out at the U.S. for its role in “escalating tensions” in the region. At Foreign Policy, David Wertime and Bethany Allen-Ebrahimian report:

“The newest fashions. State-of-the-art electronics,” the video begins, sounding like a commercial. “Don’t you want to get your hands on these as quickly as possible?” Viewers are advised that if they do, “then you better pray for smooth sailing in the South China Sea!”

The future of smooth sailing in the South China Sea is currently murky. An international tribunal in the Hague will soon rule on the validity of some of China’s claims in the South China Sea after the Philippines, one of several countries in the region whose territorial claims there overlap with China’s, filed the case in 2013. China has repeatedly declared it will not adhere to any decision made by the tribunal. To help reduce the toll to its international image if it flouts a ruling by an internationally recognized legal body, China has launched a major public relations campaign attempting to win foreign nations over to its side. The latest video shows Beijing hasn’t forgotten the importance of rallying domestic support.

[…] While the video is upbeat in tone, the United States comes in for some criticism. While English translation of the Chinese video softens its rhetorical edges a bit, the original Chinese says that given the U.S. position “very, very far away” from the South China Sea, the United States has been “too actively engaged” in the region, including its backing of the Philippines arbitration case and U.S. deployment of spy planes near China’s border. The video calls such actions “bellicose.” [Source]

While Foreign Policy’s coverage ends by reporting on a largely favorable netizen reaction to the video, many less approving comments were posted to Weibo—and quickly deleted. CDT Chinese has compiled some examples from Free Weibo, and a few are translated here:

@crydeblog: Since you’re unable to settle your own disputes, you’re going to threaten the fart people? Were things really always that great in the South China Sea before your country‘s land reclamation and island building?

SongXiaoming-Shanghai (@宋晓明-上海): Forward your mother. Are you still under the impression that the people have an IQ of zero? [Chinese]

Last weekend at the BBC, Jon Sudworth reported on his trip to a retired fisherman’s house in Hainan after seeing another recent propaganda campaign. An English-language report from China Daily last month hailed a 600-year-old document as “ironclad proof”  that the South China Sea is an indisputable part of China. Much to Sudworth’s surprise, the book that had been described as evidence fit to settle a raging international controversy had made its way to the landfill:

“Although the book was important, I threw it away because it was broken,” he says.

“It was flipped through too many times. The salty seawater on the hands had corroded it… In the end it was no longer readable so I threw it away.”

Whatever it was, Mr Su’s book is not, it seems, any longer ironclad proof of anything. Except perhaps China’s Communist Party-controlled media’s willingness not to let a few facts get in the way of the official narrative.

We leave Mr Su’s house, a little baffled by the experience, and are given another glimpse of Hainan’s readiness to control the message when it comes to the South China Sea. [Source]

In recent months, reports have focused on the Chinese government’s efforts to influence Australia’s position on the South China Sea conflict through propaganda and diplomacy.