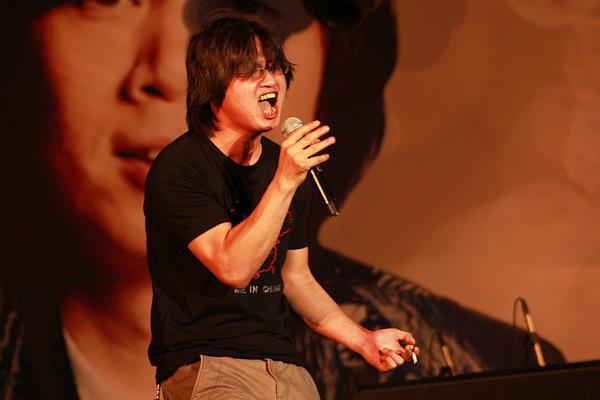 CDT is expanding its wiki beyond the Grass-Mud Horse Lexicon to include short biographies of public intellectuals, cartoonists, human rights activists, and other people pushing for change in China. Folk rocker Li Zhi didn’t shy away from politics in his early work. He once wrote of censorship in China, “We’re like pigs, just sitting around and fighting with each other in the pen they put us in.” The singer-songwriter has enjoyed commercial success in recent years. As he has gone more mainstream, his work has become less political, but he has maintained an honest self-awareness and commitment to the independent music scene.

Two of Li’s earlier songs, “Goddess” and “The Square,” elegize the 1989 protests and their violent suppression around June 4 of that year. CDT has translated the lyrics to both:

I have a friend, she’s 21
Always wears a white windbreaker
She lives behind a box
A photo hangs there
The people in the photo are inside the box
Each morning, a red diaper rises from a phallus
So she can’t see the people’s faces on the tombstones

This friend of mine,
she says she’s a treasure
Why did Daddy leave her here?
He says he’ll come back
He says he’s waiting
The blue ocean is quiet and distant
She survives on the fresh blood of the past
Waiting’s only brought a makeup-wearing hound

I have a friend
Sometimes I go see her
She never sees the color of the sky
This photo under the sky
Like the paper I use
I love it, I hate it, I feel sorry for it

Another dizzy spell and the blood on the ground will disappear

Where are you riding your scooter to?
You’re gliding in happy circles
They watch you and wish you the best
I used to have a face like yours

Now this square is my grave
This song will be your dirge
You’ll be taught to be a bad guy
A heartless, lazy dick

Now this square is my grave
This song will be your dirge
You’ll be taught to be a bad guy
A heartless, lazy animal

I forgot about his hands