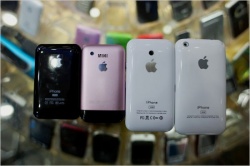 A reference to the imitation goods, especially counterfeit electronics, which China has become notorious for producing. Literally meaning “mountain stronghold,” the term was historically used to describe the remote stockades which housed bandits and warlords who were evading authorities.

Contemporary colloquial use of the term refers to cheaply produced and often poor-quality imitation products. This use of the term originated with Cantonese slang, which applied shanzhai to small, low-end factories in Hong Kong and Shenzhen that produced non-brand name goods. By assuming brand names, and imitating the appearance and capabilities of well-known branded products, shanzhai goods were able to escape official detection and evade tax payments.

The term has expanded to describe any knock-off or imitation. An average singer with a striking resemblance to Taiwanese pop star Jay Chou, for example, may be called a “shanzhai Jay Chou.”

In June 2016 at an investor conference, Alibaba founder Jack Ma deflected criticism that the company’s consumer-to-consumer online bazaar Taobao has become a hotbed for the distribution of shanzhai goods by claiming that the improving quality of counterfeit production was the true problem. “The problem is that the fake products today, they make better quality, better prices than the real products,” Ma said to investors. “It’s not the fake products that destroy them, it’s the new business models.” International companies had been voicing concern that Alibaba was failing to protect their intellectual property by selling fake products online.