Wu Jianmin on the Dangers of Nationalism 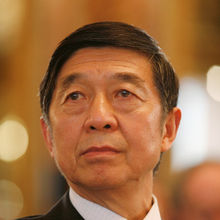 On June 18, former diplomat Wu Jianmin was killed in a car accident while traveling to Wuhan to deliver a speech. Wu, 77, a former ambassador to France, the Netherlands and the United Nations in Geneva, and former president of China Foreign Affairs University, was known for taking a dovish approach to foreign relations and speaking out against nationalism. In his final speech, delivered June 6 and titled “Sino-U.S. Relations and the World Order,” Wu spoke about the global rise of nationalism and populism, and warned against the dangers of combining the two:

Recently, nationalism and populism have been expanding around the world, becoming a global phenomenon. In the U.S. presidential election, populism and nationalism are rampant. Listening to Trump’s speech, it sounds like all of America’s problems are caused by China.

Nationalism has two connotations. First, love for your own country, which is not wrong. Second, exclusion of others and pushing the blame for your country’s problems onto other countries. I am good, others are bad. This is problematic.

In electoral politics, some people like to use nationalism and populism to curry favor with the public. They put forward slogans, not caring if they are rational or not, as long as they win votes.

Zhen Liu at The South China Morning Post provides an obituary for Wu looking back on his career:

Amid the nationalist frenzy of a rising China, Wu steadily reminded people to stay calm and rational.

[…] Wu started as a French language translator at the Foreign Ministry in 1959, and interpreted for top Chinese leaders until 1971, when he was sent to the United Nations as a member of the first delegation to represent the People’s Republic of China.

In recognition of Wu’s hard work as a political counsellor in Brussels for embattled Beijing after the 1989 Tiananmen incident, the ministry promoted him to spokesman, a position he described as “like walking on the thin ice” for the next four years.

Wu’s later career as ambassador in Europe earned him the reputation of a “charming gentleman diplomat”. His mission to France was considered so successful that French president Jacques Chirac awarded him a Chevalier medal of Legion of Honour, one of Frances highest orders of merit at his departure in 2003. [Source]

China Daily paid tribute to Wu’s gentle hand in managing China’s foreign relations while acknowledging that many of his views went against mainstream public opinion in China:

Rational, modest, self-confident, and inclusive diplomacy is more conducive to creating a fine international environment for the country’s development, he insisted.

He believed in speaking the truth and was not afraid to speak out, even when that meant offending “mainstream public opinion”. What is truly worrying for China is not any natural catastrophes but that it loses its head and become beside itself, he once warned.

His advocacy of engagement with the existing international order, even with countries commonly perceived as adversaries, sounded out of tune with the “mainstream”. So much so that his critics ridiculed him as an “old-school diplomat”, and internet thugs cursed him as a “traitor”.

He highlighted patience and tolerance for relations across the Taiwan Straits. His formula for Sino-US relations: Focus on cooperation, control differences, beware nationalism and populism. [Source]

In April, Wu took on Global Times editor Hu Xijin for his nationalistic views in what became a public debate with netizens taking sides between the two. But after his death, several netizens expressed support for Wu and his work. Diandian Guo of What’s on Weibo writes:

Although not everybody agreed with his views, most netizens see Wu as a truth-speaking diplomat. Many lit candles for the deceased diplomat under the Sina Weibo topic “Wu Jianmin Killed in Car Accident” (#吴建民车祸去世).

“Mr. Wu was a witness of Chinese diplomatic history. He had a rational and distinct view of the world. He was an excellent diplomat and his death is a loss to the country”, writes one netizen.

Some netizens show sympathy with Wu’s diplomatic ideas and worry that China’s future foreign policy will become less peaceful: “Does the death of Ambassador Wu suggest the end of a diplomatic époque? Must the national discourse be diverted to international fractures in a time of economic pressure? Now many are propagating war on line. This is not a good phenomenon.” [Source]

In recent years, through my work with Yale Law School’s China Center, I had the privilege of spending many hours with Wu in U.S.–China Track 2 dialogues. While much is being written about his position as a so-called “dove” in China’s foreign policy debate, I will remember him for his commitment to practical action under difficult circumstances. While some in both China and the United States advocated “tough” and uncompromising positions, Wu sought a way forward while acknowledging that common and conflicting interests coexist in international affairs. This practical orientation is captured in much of his public writing. [Source]

For the Diplomat, Dingding Chen also points out Wu’s role as a “rational strategist,” adding that the dichotomy between “hawk” and “dove” does not clearly capture his contribution to China’s foreign policy:

This being said, calling Wu China’s biggest ‘dove’ is misleading too. In a way, Wu might have appeared to be soft with his gentlemanly style of speech, but he was definitely a staunch defender of China’s interests. For instance, Wu also believed that China’s military should be well prepared to fight and win a war, no matter who the adversary would be. He just did not believe that such a war was quickly approaching China, hence his support for a more relaxed external outlook and recommendation to focus on domestic problems.

Such a view might best be described as a rational view of national strategy. A ‘dove’ does not necessarily promote peace at all times and at any cost. A ‘hawk,’ likewise, does not always launch the missiles when there is a military crisis. Most members of China’s foreign policy community are neither ‘doves’ nor ‘hawks’ fully; they simply follow a rational calculation of strategy given the situation.

If this is true—and I believe it is—then there is no need for the outside world to be concerned about the loss of China’s most influential ‘dove.’ Wu was never a complete ‘dove’; he was simply a rational strategist, or a rational dove, if we must use the term. Only in that sense we can say that China needs more doves like Wu Jianmin. And many Chinese foreign policy experts would, in my view, accept this label. (Or we might as well call them rational hawks.) [Source]

In a tribute to Wu on the Chinese Politics from the Provinces blog, the author writes about how Wu’s positions changed under Xi Jinping, as the government took a more hardline approach in domestic and foreign affairs:

Up to a few years ago, following his retirement from the Foreign Affairs College, Wu served as the central government’s unofficial liaison and staunch defender to many in the foreign press corps, sometimes presenting possibilities as forthcoming policy, such as the lifting of the one-child restriction–years before that actually happened. Under President Hu Jintao, Wu was eager to defend China’s foreign policies and was often generous with his time to visiting dignitaries and scholars. While Wu never had the access to policymaking he clearly hoped to have when he returned to Beijing full-time (more on that below), many foreign scholars and commentators nonetheless took him as a conduit to the Hu leadership—which Wu never quite was.

However, Wu’s stance changed under the present leadership. He insisted that the new hardline from Beijing was potentially dangerous to China’s interests, creating more adversaries than allies. After years of upholding Chinese policies abroad, Wu became more critical at home, unafraid to debate hawks and saber-rattlers (especially Hu Xijin, the editor of the nationalist tabloid Global Times)–who are far more numerous now than they had been under Hu—in an effort to damp down the growing enthusiasm here for a more muscular and militaristic strategy. As the brilliant Shi Yinhong of Renmin University rightly noted, Wu “had moral courage” to speak out in an environment where criticism is not always warmly welcomed.

[…] Interestingly enough, Wu’s impact on Chinese foreign policy grew in retirement, as his commentary began to be more widely disseminated on social media and he actively sought to compel hardliners to defend their positions. Chinese foreign policy was far better for his service and for his continued presence as he dispensed hard-won wisdom and nuance. [Source]

Read more about Wu via CDT, and see his contributions to ChinaFile discussions on China’s foreign relations.