Tibetan Groups Call for End to Demolition at Buddhist Site 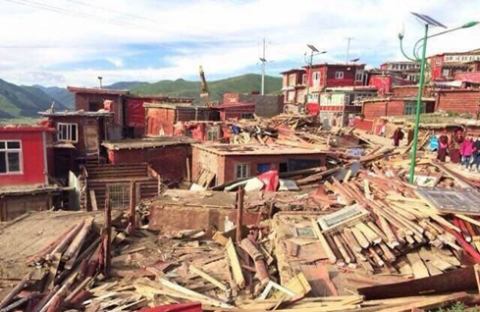 At The New York Times, Edward Wong reports on calls from Tibetan rights groups to end the ongoing demolition of monastic dwellings in Larung Gar, a town in a majority Tibetan region of Sichuan Province. The town is reportedly home to a population of over 40,000, comprised mostly of monks and nuns, and also to the Larung Gar Buddhist Academy, which is considered the largest Tibetan Buddhist institute in the world.

Demolition work began last week, and images of bulldozers and piles of rubble have circulated on social media, according to the International Campaign for Tibet, based in Washington. The lamas in charge of the institute have urged people in the area to stay calm, the group said.

“Larung Gar in Sertar has become increasingly prominent in both Tibet and China in recent years as a vital center for the study, practice and promotion of Buddhist teachings otherwise difficult to access or nonexistent in regular monasteries and nunneries due to restrictions put in place by the Chinese government,” the group said.

The institute houses about 10,000 people; official orders say no more than 5,000 should be living there after the demolitions.

[…] Free Tibet, a group based in London, said the demolitions began at 8 a.m. on July 20, when a Chinese work team accompanied by police officers and government officials arrived.

Reuters’ Ben Blanchard reports that state media has denied the housing demolitions and evictions, presenting the work as “renovation” supported by monastic leaders:

The Global Times, an influential tabloid published by the ruling Communist Party’s official People’s Daily, quoted an unnamed government official in Garze as saying Buddhist leaders themselves have been trying to reduce the number of unregistered monks and nuns at Larung Gar.

“The site has grown immensely in recent years, with a steady influx of tourists and lay people from other provinces and foreigners, that even monastery leaders have lost track of the number of their personnel,” the official said, in a report in the paper’s English-language edition.

“It is unfair and a burden on them to use offerings given by local believers to provide free accommodation and education to the unregistered,” the official added.

The “dismantling” of cabins which dot the hillside around the center and where people live will help give firefighters access as there have been several fires in recent years, the newspaper added.

The Global Times said the government was requiring that only the roughly 8,000 monks and nuns already registered there be allowed to live at Larung Gar.

The International Campaign for Tibet said authorities have ordered the number of monks and nuns living there to be cut in half to 5,000. [Source]

Reporting last week as the demolitions began, the BBC relayed a quote from a Larung Gar resident, originally reported by Free Tibet, on the inequality of the targeting of the institute:

One student at Larung Gar was quoted by Free Tibet as saying: “If the only way to solve the overpopulation is destroying the houses, then why is the same policy not implemented in the Chinese cities and towns where the population is overcrowded?

“Where is the equality, rule by law, public welfare, religious freedom and equal rights of all nationalities (as they say) if you crush down the houses of innocent religious practitioners who are living simple lives?”

[…] Free Tibet director Eleanor Byrne-Rosengren said: “The demolition at Larung Gar is clearly nothing to do with overcrowding – it is just another tactic in China’s attempt to subvert the influence of Buddhism in Tibet.” [Source]

Free Tibet last week published a video of the destruction at Larung Gar, and shared photos on Twitter:

We have received images of the demolitions at the beautiful Larung Gar monastery. More info: https://t.co/lSBAMf2GJT pic.twitter.com/lHSY5Q2hKF

Following protests by Tibetans in March of 2008, authorities began tightening religious and cultural restrictions in Tibetan regions of China. Since 2009, as many as 145 Tibetans in China have self-immolated in protest against Beijing’s policies, a trend that Tibetan activist Tsering Woeser sees as a direct response to increased restrictions. Amid the crackdown, authorities have ordered Tibetan religious institutions to aid in spreading Party propaganda, and have vowed to encourage and test patriotism among the monastic community. Meanwhile, Party officials have reaffirmed a commitment to directly overseeing Tibetan religiosity for political expediency, vowing to name the reincarnated successor of the exiled and aging 14th Dalai Lama, and more recently allowing their controversial pick of the Panchen Lama to revive a tantric ritual not held in Tibet for 50 years.