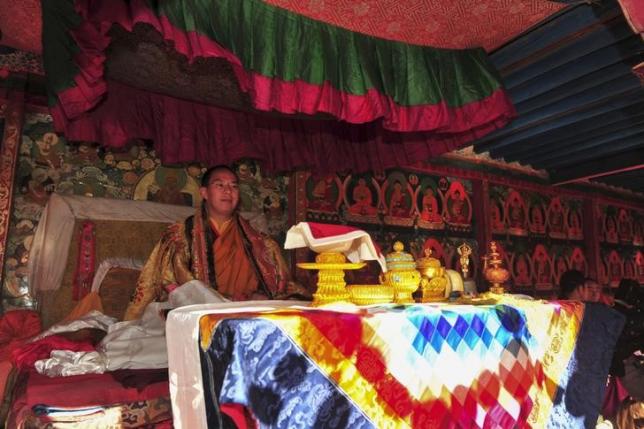 According to Xinhua, Chinese government-backed Panchen Lama Gyaltsen Norbu began a four-day Kalachakra initiation on Thursday, marking the first time this important Buddhist ritual has been carried out in Tibet in 50 years.

The monks, from Labrang Lamasery in northwest China’s Gansu Province and Zhaxi Lhunbo Lamasery in Xigaze, Tibet Autonomous Region, will perform this ritual every morning during the four-day event.

[…] Public instruction and initiations have been scheduled for every afternoon. On Thursday, monks, nuns, gurus and devotees will arrive at the New Palace of the Panchen Lama, near the Zhaxi Lhunbo Lamasery, at noon.

It is estimated that some 50,000 Buddhists will attend the auspicious the event. [Source]

Beijing handpicked Gyaltsen Norbu for his current position in 1995 after rejecting Gendun Choekyi Nyima, a then six-year-old boy named by the Dalai Lama as the reincarnation of the 10th Panchen Lama—the second-highest ranking lama in Tibetan Buddhism after the Dalai Lama. Gendun Choekyi Nyima subsequently disappeared, and his whereabouts are still unknown, prompting repeated calls for his release by Tibetan exiles and activists. In September 2015, the Chinese government reported that Gendun Choekyi Nyima is “living a normal life and does not wish to be disturbed,” but he has not been seen in public in the 21 years since his disappearance.

The Chinese government has long sought to legitimize Gyaltsen Norbu as the real Panchen Lama. The current move to have him officiate the Kalachakra ritual is part of an ongoing effort to bolster his credentials and strengthen his position. Ben Blanchard at Reuters reports:

China has gradually exposed its Panchen Lama in public roles in the hope he will achieve the respect commanded by the Dalai Lama among Tibetans and globally, and in 2012 he made his first trip outside mainland China when he visited Hong Kong.

The London-based group Free Tibet said the ritual would be the biggest religious platform Beijing has given its Panchen Lama to date.

“Its decision to have Gyaltsen Norbu preside over a ritual as important as the Kalachakra marks a stepping up in these efforts.” [Source]

Four Tibetan NGOs in Dharamshala have organized a rally ceremony to condemn the government-sanctioned Kalachakra, Tenzin Dharpo at Phayul reports:

The Tibetan Women Association, Student for a Free Tibet, Gu Chu Sum Movement and the National Democratic Party of Tibet (NDPT) today organized a ‘scarf offering ceremony’ near Tsuglakahang Temple, to a portrait of the Panchen Lama Gendun Choekyi Nyima recognized by the Dalai Lama.

Lukar Jam Atsok, the President of Gu Chu Sum said the move to politicize an entirely religious event can be construed as a direct “insult and belittling” of the Tibetan people and its way of life. He said, “The matter concerning Gyaincain Norbu being the fake Panchen is not a personal issue; it is a full fledged assault by China on the tulku tradition of Tibetan Buddhism and an attempt to assert authority over the issue of reincarnation of tulkus in general.”

[…] National Director of the activist group SFT, Tenzin Tselha said that the scarf offering ceremony serves a dual purpose of asserting that Tibetan people have always considered the incarcerated Gendun Choekyi Nyima as the true Panchen and at the same time let China know that Tibetans will not accept the lies manufactured by the CCP. “CCP regime fails to understand the faith of the Tibetan people in Buddhism, and the incorruptible relationship between a disciple and a Lama. Let’s give a strong message to China that faith cannot be imposed upon or controlled by gun. Our aim with this action is to highlight the hypocrisy of the Chinese government and expose the Chinese Communist Party (CCP) in its manipulation and oppression,” said Tselha. [Source]

According to Kalsang Sherab at The Tibet Post, authorities in Tibet are forcing locals to attend the Kalachakra initiation against their will, making it mandatory for each Tibetan household to send two members to attend the event.

Elsewhere, Radio Free Asia reports that large-scale demolition work has begun at Larung Gar Buddhist Academy in Sichuan Province. The undertaking is part of a government plan to substantially reduce the size of the academy, which is currently home to approximately 40,000 monks and nuns.

The demolition at the Larung Gar Buddhist Academy in Serthar (in Chinese, Seda) county began in the early morning hours, a resident monk told RFA’s Tibetan Service, speaking on condition of anonymity.

“The work started at 8:00 a.m. on July 20, beginning with those structures that were not already recorded in the government’s record of permitted dwellings,” RFA’s source said.

“The work crews are all [Han] Chinese,” he said.

[…] The order now to reduce the number of Larung Gar’s residents to a maximum level of 5,000 is not a county plan “but comes from higher authorities,” with China’s president Xi Jinping taking a personal interest in the matter, sources told RFA in earlier reports.

“We don’t know how much has already been torn down, as we are not allowed to visit the site,” RFA’s source said.

Larung Gar usually bustles each summer with pilgrims who come from other parts of China and Tibet to visit, “but now there are restrictions on traveling here,” he said. [Source]

Yesterday’s #LarungGar demolitions were of homes outside the legal building limit & were expected. Controversial demolition likely from 25th

Sichuan officials say reports of demolition at Larung Gar are “false” – but they are improving fire exits” https://t.co/LiG78kQYTy (Chinese)