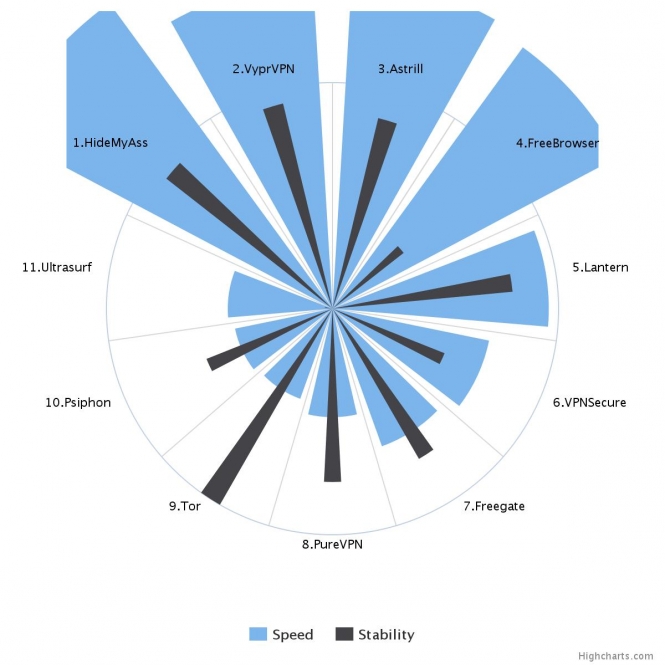 The UN Human Rights Council last month adopted a non-binding resolution condemning the intentional disruption of citizen’s internet access. China, currently the world’s worst country for internet freedom according to a 2015 report from Freedom House, was unsurprisingly one of the member nations that opposed the resolution. Amid Chinese authorities’ ever-reinforcing efforts to maintain control of the websites accessible by Chinese internet users, those who use Virtual Private Networks (VPNs) to access information blocked by the Great Firewall have found those tools to be less and less reliable over the past two years—though that hasn’t prevented Party members instrumental in creating China’s censorship infrastructure from using the tools in public. To counter official efforts to complicate VPN usage, anti-censorship organization GreatFire.org has now launched Circumvention Central, a real-time database of information on the usability of VPN services in China. GreatFire’s blog explains the tool and their objectives for launching it:

Our first objective is to help to grow the number of Chinese who circumvent censorship restrictions in China. By sharing our information and data about these tools, we hope to show a wider audience which circumvention tools are working.

Our second objective is to improve the circumvention experience for users in China by bringing transparency to tool performance. We will measure these tools on speed (how quickly popular websites are loaded) and on stability (the extent to which popular websites load successfully).

As internet users in China know, the authorities have stepped up their attacks on circumvention tools over the past 18 months. CC is part of our attempt to fight back. Instead of making this a game about secrets, we want to encourage people to share information about circumvention tools that do work. […] [Source]

Meanwhile, the CCP’s United Front Work Group has warned U.S. security and hosting company CloudFlare against providing service to websites operated by Tibetan and Uyghur groups that Beijing considers to be separatist organizations in a post on the official China-Tibet Network website. CloudFlare, who has previously been accused of having ties to the CIA, in 2014 expressed willingness to comply with Beijing’s internet rules for access to China’s internet market. The company then teamed up with Chinese search giant Baidu on a virtual joint venture that the New York Times’ Paul Mozur wrote could be “a new model for American tech firms that are considering doing business in the delicate areas of China’s tech industry.” In a blogpost, Gao Dawei summarizes the report from tibet.cn:

According to the July 1 report from the “China Tibet Network”, is providing internet services to both sides — not only to its Chinese partner Baidu but also to “Tibet independence” and to “Xinjiang independence” websites.  A web search turned up information, displayed in the article, that Cloudflare provides services to websites of both the organizations Tibetan Youth Congress and to TibetanWomen.

The article notes that Cloudflare CEO Matthew Prince in an interview said that Cloudflare has seventeen data centers in China in 2015 and hopes to have fifty in 2016.  On the morning of June 28, as a representative of a ‘new economy’ businessman, he made a presentation to Chinese Premier Li Keqiang about the large investment that Cloudflare and its Chinese partner Baidu were making in China’s cloud computing infrastructure.

The article concludes “this writer believes that Cloudflare, Amazon and other companies come to China with the expectation that they will have good prospects to develop their businesses.  However, when faced with serious political issues, cannot we expect them to give a sincere and convincing response?”. [Source]

In 2014, CloudFlare hosted Occupy Central’s website for its unofficial referendum on Hong Kong electoral reform. The polling website suffered what the New York Times called “one of the most severe cyberattacks of its kind ever seen.”