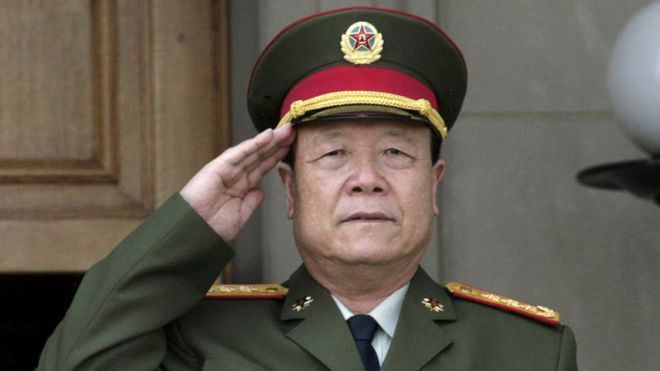 Following a closed military trial that began in May, former vice chairman of the Central Military Commission Guo Boxiong has been sentenced to life in prison for taking bribes. Xinhua reports:

Guo was also deprived of his political rights for life and stripped of his rank of general. His personal assets were seized, and all his illicit gains were confiscated and turned over to the state treasury.

Guo pled guilty and decided not to appeal, according to a statement issued by the military court after the trial.

The military court ruled that Guo had taken advantage of his position to assist the promotion and reassignment of others, and he had accepted huge amounts in bribes both personally and in collusion with others.

The court carried out a closed trial as military secrets were involved. The trial has been conducted in a fair and independent manner, and its verdict could be tested by the law and time, said the statement. [Source]

Rumors about an investigation into Guo, the senior-most military official to be tried for corruption in China, had been circulating since 2014, and the former military leader was expelled from the Party last year. His son, former PLA major general Guo Zhenggang, is also reportedly under investigation. The state media focus on Guo’s guilty plea, the fairness of his trial, and the rule of law follow a pattern that has emerged after guilty verdicts amid Xi Jinping’s anti-corruption drive. Similar state media coverage followed the life sentences of former security czar Zhou Yongkang and former Hu Jintao aide Ling Jihua, the two highest-ranking officials to have fallen amid the campaign.

The New York Times’ Chris Buckley relays state media commentary on Guo that preceded the announcement of his guilty verdict:

Long before the verdict was announced, party and military officials and news outlets had already brandished General Guo’s alleged misdeeds as proof of why Mr. Xi had to take aggressive action to stamp out graft.

The official commentaries suggested that deep corruption in the People’s Liberation Army, especially buying and selling promotions, had sapped the preparedness of officers, and even their loyalty to the Communist Party. The commentaries often lumped General Guo with Xu Caihou, another former military commander placed under investigation for corruption. Both served in the Politburo, one of the Communist Party’s highest rungs of power.

“The problems of graft and corruption of Guo Boxiong and Xu Caihou are staggering,” said an excerpt from a military indoctrination book published in People’s Liberation Army Daily in May. “But this was not the crux of their problems. That crux was that they had violated a political bottom line.” [Source]

The “staggering” scale of Guo’s corruption was used to illustrate author Ning Ken’s recent argument at Lit Hub that “modern China is so crazy it needs a new literary genre”:

[…] Early in 2015, a department head at the National Development and Reform Commission was investigated for corruption. In his apartment they found more cash than they could count by hand. They got currency-counting machines so they could zip right through the counting, but they burned out four of the machines before they got a final tally, which was more than 200 million Renminbi, which is about 31 million US dollars.

Second example. Guo Boxiong is a retired general in the People’s Liberation Army. When Guo was investigated for corruption, they found so much cash in his home that they couldn’t even try to count it with a currency-counting machine. They had to weigh it by the ton. They needed a truck to haul it all away. [Source]

Beijing-based political commentator Zhang Lifan said the sentence might also reinforce Xi’s standing ahead of the annual summer conclave at Beidaihe, where the tone for key policies and party reshuffles is expected to be discussed.

“It’s a show of strength before the Beidaihe meeting. The military overhaul is still under way,” he said. [Source]

Xi’s anti-corruption drive has been viewed as, at least in part, a means for the president to consolidate his power over the Party, military, and government. Forecasting past the Beidaihe meeting, some commentators see next year’s 19th Party Congress, an event that will reveal the line-up for the central Party leadership in years to come, as being instrumental for Xi to reinforce his control over the Politburo and its Standing Committee.