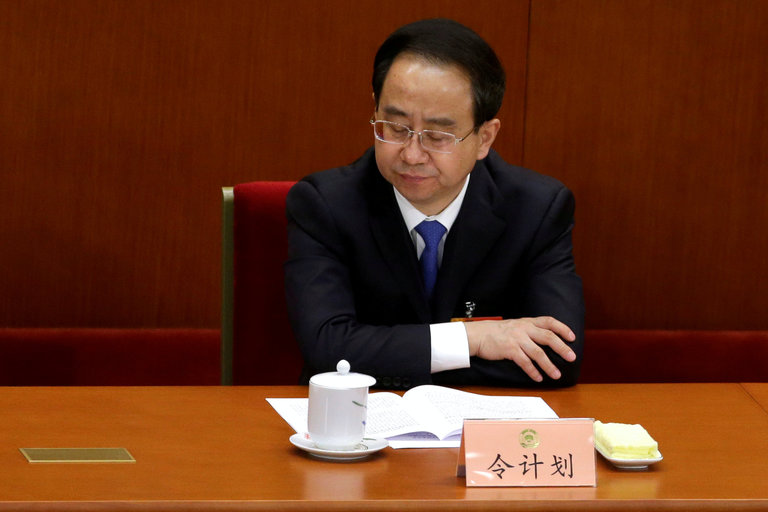 Ling Jihua, a prominent former aide to Xi Jinping’s predecessor Hu Jintao, has been sentenced to life in prison for abuse of power, taking bribes, and illegally obtaining state secrets. After Ling was formally charged in May, propaganda authorities warned all news websites against independently reporting on his case, directing them to only republish official media and government information. Ling becomes the third senior Party official to receive a life sentence for corruption in as many years. The New York Times’ Edward Wong reports:

Mr. Ling joins two other notable senior party officials, Bo Xilai and Zhou Yongkang, in receiving a lifetime prison sentence for corruption. All three men have been accused of trying to undermine the authority of President Xi Jinping, who took office in late 2012, the same year that scandals involving the three men unfolded.

Mr. Bo and Mr. Zhou are considered political enemies of Mr. Xi, and Mr. Ling is a critical player in an informal party group, known as the Youth League faction, that was a center of power before Mr. Xi became China’s top leader. Hu Jintao, the former president and party chief for whom Mr. Ling served, was a leader of that faction.

[…] A court in Tianjin, an east coast city near Beijing, formally announced the life sentence on Monday, and a news report said a closed-door trial had been held on June 7. Prosecutors had filed an indictment with the court in May. But in China, the verdict and sentencing are often political decisions made at the top levels of the party; Mr. Xi would no doubt have had to approve the judgment on Mr. Ling and may have made it himself.

A report by China Central Television, the state network, said that Mr. Ling, his wife, Gu Liping, and a deceased son, Ling Gu, all took bribes totaling 77 million renminbi, or about $11.6 million. The report had no details of the state secrets that Mr. Ling supposedly stole. [Source]

In late 2014 authorities announced an investigation into Ling and his four siblings amid Xi Jinping’s ongoing Party corruption purge. The former top presidential aide’s once promising Party career was derailed after he was accused of covering-up a Ferrari crash which killed his son Ling Gu and a passenger in Beijing in 2012.

The court in the northern city of Tianjin, close to Beijing, held the case behind closed doors on June 7, according to a statement reported by the official Xinhua news agency.

[…] State broadcaster China Central Television on Monday evening showed a gray-haired Ling standing before a judge in a full courthouse, flanked by police officers as he read his final statement.

Ling accepted the facts of the case and did not contest them, Xinhua added.

“I accept all the charges and submit to the judgment,” Xinhua quoted Ling as saying in his final statement. “Today’s trial will be engraved in my memory.”

Ling added that the trial was “solemn, meticulous, rational and civilised”, embodying a combination of rule of law and humanitarian treatment, Xinhua added.

Ling’s wife, Gu Liping, testified against him by video, with the help of multimedia presentations of evidence, Xinhua said. Deceased son Ling Gu was briefly mentioned as also having taken bribes, crimes the court said his father was aware of but did nothing about. [Source]

Ling’s humble confession and praise for the rule of law follows a familiar pattern. After former state security czar Zhou Yongkang was sentenced to life in prison for corruption charges last June, for example, Xinhua quoted Zhou: “The basic facts are clear. I plead guilty and repent my wrongdoing. […] The handling of my case in accordance with Party rules and the law reflects the authorities’ determination to govern the Party strictly and advance the rule of law.”

The Wall Street Journal’s Chun Han Wong reports on links that the trial revealed between the case of Ling Jihua and that of Zhou Yongkang. Zhou and Ling are the senior-most Party officials to have fallen amid Xi Jinping’s anti-corruption campaign:

While corruption investigators continue to detain senior officials, none has had the power or influence that Mr. Ling held. In the campaign’s 3½ years to date, only one has surpassed his rank, Zhou Yongkang, the former security chief and member of the central leadership, who was sentenced to life in prison a year ago.

Authorities also have taken down members of Mr. Zhou’s family and many of his associates who rose to key posts in the petroleum industry, the police and in provincial governments—areas where Mr. Zhou had built his career.

Monday’s verdict disclosed links between Messrs. Ling and Zhou’s cases. Li Chuncheng, a former Sichuan provincial official and associate of Mr. Zhou’s, was found to have offered about 890,000 yuan worth of bribes to Mr. Ling’s wife, the Tianjin court said. Mr. Zhou, according to his sentencing document, asked Mr. Li to assist Mr. Zhou’s relatives and associates in starting businesses. Mr. Li himself was sentenced to 13 years in jail last October for accepting bribes and abuse of power. [Source]

The South China Morning Post’s Shi Jiangtao notes similarities between the state prosecutions of Zhou and Ling, and a major difference between their trials and that of former Chongqing Party Secretary Bo Xilai, who was sentenced to life in prison after a public trial in 2013:

Both Ling and Zhou were tried in secret by the Tianjin No 1 Intermediate People’s Court and both avoided the death penalty to be sentenced to life in prison.

Both were also charged with taking huge bribes and abusing power. In addition, Ling was convicted of stealing a large amount of state secrets while Zhou was found guilty a year ago of a more serious offence of intentionally divulging state secrets.

[…] Mainland analysts also said the closed-door trials of Ling and Zhou were a big step backwards from the experiment with open hearings in Bo’s case in 2013.

[…] Unlike Ling and Zhou, who said they accepted the verdict, “princeling” Bo sought to appeal the decision his case to the Shandong Higher People’s Court, which rejected it a month later as widely expected.