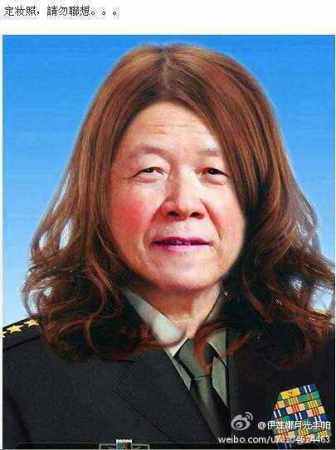 Former Central Military Commission (CMC) Vice Chairman Guo Boxiong is rumored to be under investigation for corruption. The rumor remains only that, but the censors have still stanched discussion. A leaked directive orders websites to root out the rumor, while Guo’s name is a banned search term on Weibo.

Posts with nothing but Guo’s biographical information are being deleted. It seems Guo is being scrubbed from Weibo, as this deleted post evidences:

樊潇洁: I’m going to try posting this: GUO BO XIONG. Let’s see if it gets deleted.

In another deleted post, one user links yesterday’s massive delays at both of Shanghai’s international airports to an alleged get-away attempt:

伊莲娜月光手帕: They Say This Is Why the Shanghai Airports Shut Down: A high-ranking military officer from a certain country dressed as a woman and used a fake passport to try to flee. He was caught by customs. His rank is about the same as Not-Bo. I don’t think this is nonsense–he’s an important person.

One Weibo user has taken the opportunity to tell a cautionary tale about Guo Boquan, Guo Boxiong’s younger brother and the head of Liquan County, Shaanxi. The younger Guo was reportedly fond of the mantra [Chinese], “I can speak with the vice chairman of the CMC. Can the governor do that?”

和尚搭伞: The story of Guo Boxiong: Guo had a younger brother named Guo Boquan who was the county head of Such-and-Such. Boquan was rather arrogant, and once boasted, “Who cares about the governor? I can speak with the vice chairman of the Central Military Commission. Can the governor do that?” The moral: Upbringing is important. Learn a little history and you’ll know that this is a classic case of no zuo no die and of screwing yourself over!

The deleted Weibo posts above have been archived by FreeWeibo.