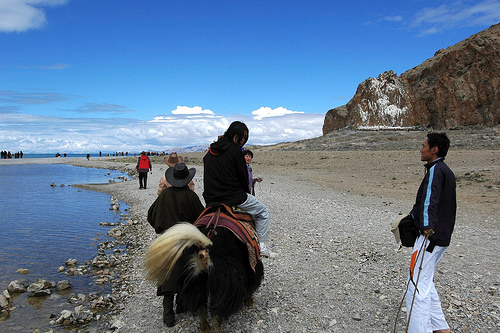 Since 2009, over 140 Tibetans have self-immolated in protest as authorities have tightened religious and cultural restrictions in Tibetan regions of China. In addition to the direct official oversight of Tibetan religiosity, seen most recently in Beijing’s insistence on naming the Dalai Lama’s eventual successor and in the regulation and partial destruction of a large Buddhist institution in Sichuan, state policy is also affecting the way of life for nomadic Tibetans, many of whom have been resettled and relocated to villages in recent years. At the BBC, Stephen McDonell reports from the Tibetan Plateau on how some Tibetan nomads are attempting to preserve their traditional way of life despite state policy encouraging village life and the economic development of pastoral lands:

Following a deliberate government policy of relocation, Tibetans have moved into the towns. Critics say this has been a control mechanism which allows the authorities to be able to track people more easily. The Communist Party says it was done to improve people’s living standards, nothing more.

So, for much of the year, people have televisions, fridges and electrical lights. But when the summer comes they head for the hills – back to the land of their forebears.

“Nomads here are nomads to the bottom of our hearts,” Kalsang Gyatso tells us. “We lived like this from ancient times. Actually we don’t like being in houses.”

[…] One young man speaks to us as he rides past. He says they must move now in order to make the most of new grass and provide for their families and that the dates for the journey are actually fixed by government regulations.

[…] China’s Tibetan areas have been hotbeds of rebellion in the past, with some blaming Beijing for restrictions on Tibetan Buddhism, language and culture. The government’s answer: development. […] [Source]

Earlier this month, the AFP reported on how policies aimed at urbanization in the Tibetan cultural realm are minimizing the number of nomads on the plateau:

[…T]he number of Tibetans maintaining the pastoral lifestyle is dwindling, with the Chinese government pushing to decrease the Tibetan nomad population and move them into resettlement villages, sometimes by force.

Since 2000, government statistics show that urban residents have leaped by more than half in the Tibet region itself, where officials launched a programme five years ago to establish Communist cadre teams in every locality.

In Qinghai province, much of which is ethnically Tibetan, the urbanisation rate has increased from 40% to nearly 50% in the past decade, but one Tibetan member of a Communist party committee in the area said that the process was happening “too fast”. [Source]

Like many other minority languages in China, the Standard Tibetan language—the most widely spoken of many dialects used by Tibetans—has also been facing pressure as state policy and economic expedience favors Mandarin education. In the most recent Little Red Podcast, anthropologist and Tibetan language researcher Gerald Roche discusses how endangered Tibetan languages face not only the external pressure of Mandarin, but also an internal pressure from Tibetan nationalism, which sees minority Tibetan dialects as an affront to pan-Tibetan unity:


Roche has been tweeting at length on the conflicts between Tibetan and Mandarin, and Standard Tibetan and minority Tibetan dialects:

Worth noting that the first language of 'local kids' is not Tibetan, but Gochang… pic.twitter.com/FxbgGdhX4M

…maybe there was a hint of linguistic imperialism, of Romantic nationalism?

The roads through Gotang – a former kingdom, now in Kangding county. Home of the Gochang language. pic.twitter.com/X0INhNtnlw

As a result of exclusion, languages are perceived as 'useless'… pic.twitter.com/08lYmnmPq2

Shopping in Tibet, in Tibetan… gets you a lot of beverages, and very little information. pic.twitter.com/ghtrnFBvuI

In <50kms, the Chinese name Tongren 同仁 is written 3 different ways in Tibetan. Must be confusing for Tibetans. pic.twitter.com/zHsH7snuqj

Tibetan culture also faces pressure from Christian missionary activity, which enjoys a relative degree of tolerance in some Tibetan regions from authorities who appear to favor its potential to dissolve the hold of local forms of Buddhism.