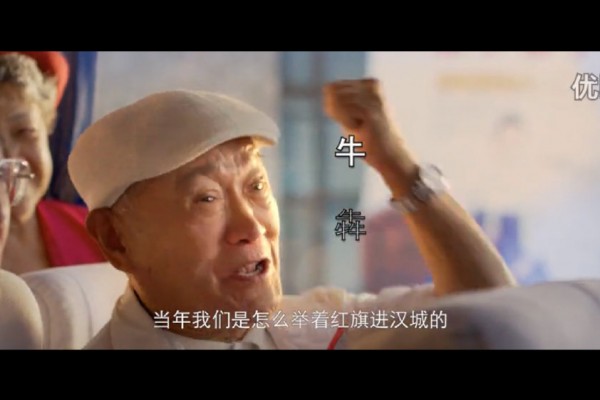 “My War,” a Korean War film set for release in Chinese theaters tomorrow, has already been panned by netizens after an ad for the film incensed viewers. In the ad, elderly Chinese tourists tell their guide in Seoul that they’ve been to this city before—back in the 1950s, to “resist America and aid Korea.” A Wall Street Journal video explains the controversy and translates key segments of the ad:

Chinese netizens have called the ad a “disgusting” insult to South Koreans that makes light of the horrors of war, with one asking how a Chinese tour guide would respond to to a busload of Japanese veterans gushing about the Nanjing Massacre. The ongoing humanitarian crisis in North Korea is not lost on Chinese netizens, either:

Lunanyibing (@鲁南一冰): What “My War” really shows is a type of national ideology, one without reflection on war, without consideration for human nature, without historical clarity, without vigilance for the future. All it has are noise and declarations. Sixty years on, the ravings of this ad are exactly this ideology’s resurgent savagery. What it faces are the tyrannical rule of the three Kims, and the suffering of over 20 million North Koreans. [Chinese]

Calls to boycott “My War” are now circulating on Chinese social media.

Director Oxide Pang Chun, who is from Hong Kong, says he had no involvement in the production of the ad. In a Weibo post, Pang wrote, “Everyone is welcome to say my film is awful, but please save it for when you have seen the movie, so that your criticism may be on point.” The ad was produced by China Film Group Corporation, which also produced “My War.”

Artist Yuanzi (原子) takes lines from the ad and puts them into a cartoon vision of the Korean War, pitting nostalgia against tragedy:

The ad for “My War” bears a striking resemblance to an American joke:

Harvey, an elderly American absentmindedly arrived at French immigration at Charles de Gaulle airport, Paris and fumbled for his passport.

‘You have been to France before Monsieur?’ the official asked in an aggressive tone.

Harvey, smiled and admitted that he had been to France before.

‘In that case you should know enough to have your passport ready for inspection,’ barked the bad-tempered officer.

Harvey gently informed the man that the last time he came to France he did not have to show his passport or any other documents.

‘Pas possible, old man. You Americans always have to show your passports on arrival in ‘la belle France.’

Harvey gave the Frenchman a long hard look. ‘I assure you, young man, that when I came ashore on Omaha Beach in Normandy on D-Day in 1944, there was no damned Frenchman on the beach asking for passports.’ [Source]

The outcome of the U.S.’s involvement in France during World War II is far less fraught than China’s support of North Korea from the 1950s to the present. Pyongyang’s nuclear tests are a perennial threat to regional stability. On Monday, Chinese Foreign Ministry spokeswoman Hua Chunying deflected U.S. president Barack Obama’s calls for Beijing to put greater economic pressure on North Korea.”The crux of the Korean nuclear issue lies not in China but in the U.S.,” she stated, possibly hinting at Seoul’s agreement this July to let the U.S. build a missile defense system on South Korean soil. North Korea’s continued belligerence has exasperated the Chinese government, too.