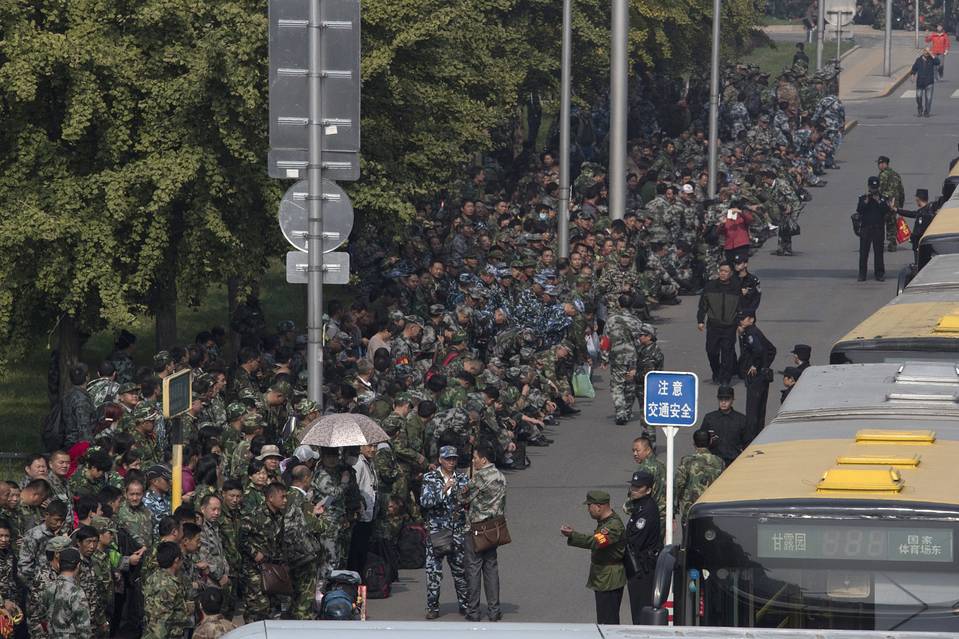 At his V-Day anniversary parade in Beijing last year, Xi Jinping announced that the People’s Liberation Army would shed some 300,000 personnel. The move was presented as a gesture of peace, but observers noted that it fit neatly into the ongoing program of streamlining and modernizing China’s bloated armed forces, which would still comprise around two million people. At the same time, Xi has moved to assert his authority over the PLA, garnering praise from U.S. presidential candidate Hillary Clinton according to recently leaked speech excerpts.

The promised troop reductions threaten to sharpen the issue of veterans’ benefits, which has repeatedly sparked protests in Beijing. In August, CDT translated a directive from the Shanxi city of Changzhi urging local authorities to “stabilize and control” veterans planning to petition in Beijing on the August 1 Army Day holiday. The latest such incident took place on Tuesday, when over 1,000 uniformed former soldiers gathered outside the Defense Ministry’s headquarters in Beijing. From Nomaan Merchant at the AP:

The purpose of their demonstration was unclear. Protesters approached by The Associated Press declined to be interviewed, and censors blocked searches on social media about retired soldiers or the Chinese defense ministry.

Hundreds of police and plainclothes security officers surrounded the protesters, hemming them in with buses and police vehicles.

While Chinese authorities routinely suppress discussions about the military and soldiers’ issues, one human-rights activist, Huang Qi, told the AP that veterans have staged more than 50 protests this year alone. However, demonstrations on such a large scale are extremely rare in the center of the heavily policed capital.

Two demonstrators told AP they were veterans who wanted the government to address military pensions, but they didn’t want to discuss the issue with foreign media. The protesters declined to give their names. [Source]

The Defense Ministry told Reuters on Thursday that it would continue working to address veterans’ concerns, but as The Wall Street Journal’s Chun Han Wong reports, protesters have heard such promises before:

Beijing has promised to improve its treatment of veterans. At an annual parliamentary meeting in March, the government pledged to spend 39.8 billion yuan ($5.9 billion) this year on allowances for demobilized troops, a 13% increase over 2015.

[…] The promise of increased aid this year, however, hasn’t assuaged participants at Tuesday’s protest. Several said they have been campaigning for years to seek the benefits they say the government had promised them upon leaving the armed forces.

“We’ve gotten nothing since retiring from service: no pensions, no social security,” said a 55-year-old protester from China’s northern Shanxi province, who didn’t give his name. A former army driver who served for 14 years, he said he has worked various odd jobs to make ends meet since leaving the PLA two decades ago.

[…] Analysts expect such tensions to worsen as the PLA pares its ranks, putting large numbers of service members out of work amid a slowdown in China’s economy. [Source]