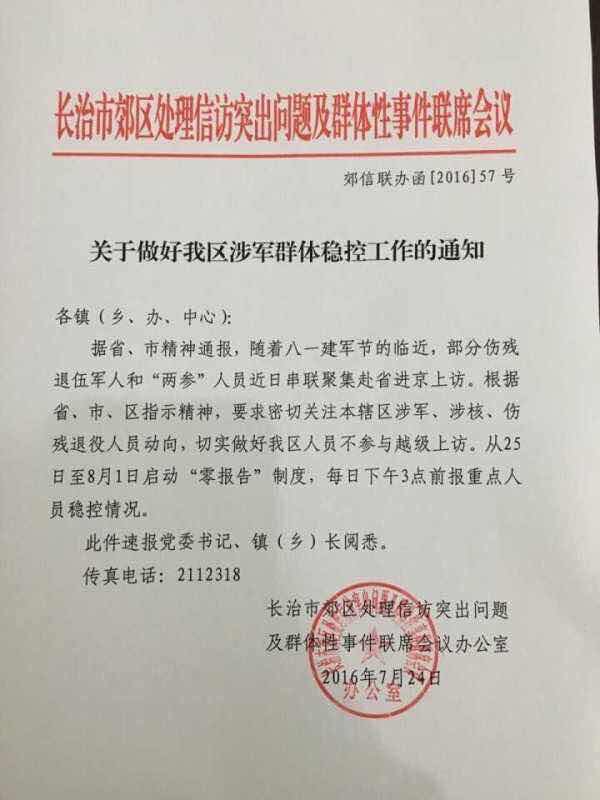 Journalist Gao Yu was sentenced to seven years in prison last April for leaking state secrets, but was granted medical leave in November. It was not her first time in prison, and her latest journey through China’s legal labyrinth has not deterred her. On Army Day this week, she tweeted a notice instructing all levels of government in Changzhi, Shanxi Province to “stabilize and control” veterans planning to travel to Beijing to air their grievances:

Greater Changzhi Office of Letters and Calls Joint Letter No. 57 (2016)

To All Towns (Townships, Offices, and Centers):

According to the spirit of provincial and municipal notifications, as Army Day approaches, a portion of disabled veterans and “dual participants” will soon assemble in the province and go on to Beijing to petition. According to the spirit indicated by the province, city, and districts, you must closely follow the trends involving the military and nuclear [testing], as well as disabled veterans, in your jurisdiction. Ensure that no one from our district bypasses their immediate superiors and goes to Beijing. A “zero report” system is in place from the 25th through August 1. Report before 3 p.m. daily on the stabilization and control of key people.

This document has been promptly delivered to the Party Committee secretary and the town (township) head.

The “dual participants” (两参) are veterans of China’s border wars who also worked in Unit 8023, a detachment that conducted nuclear tests at Lop Nur Test Base in Xinjiang between 1964 and 1996. Many members of Unit 8023 suffer from radiation poisoning. In the May 2015 edition of the scholarly journal Modern China, Neil J. Diamant and Kevin J. O’Brien describe unit members sickened by handling radioactive material with bare hands and “riding horses toward a mushroom cloud protected only by a gas mask.” Not all unit members were in the military, further complicating their petitioning for help from the government: they are “ineligible to be designated ‘disabled soldiers’ 残废军人 or workers who suffered a workplace accident.” They have petitioned three separate offices in Beijing, pushing for special treatment for the effects they and their progeny have endured.

The CCP prioritizes the “stabilization” of military personnel and veterans. Veterans in China face many of the same problems that veterans in the U.S. do, such as difficulty finding employment and staying physically and mentally healthy after life-changing trauma. But the protests of former People’s Liberation Army soldiers are kept quiet in China. In 2010, NPR’s Anthony Kuhn described “dissatisfied veterans” as one of three “emerging threats to stability.” This Monday, Bloomberg reported on handsome severance packages being offered to military personnel:

The buyouts are meant to speed Xi’s push to shed 300,000 troops from the 2.3 million-member military, the centerpiece of China’s biggest shake-up of the PLA since the early days of the Cold War. They also reduce the risk that demobilized troops end up disgruntled and on the streets, creating a new source of unrest at a time of slowing growth. Authorities have already ordered state-owned enterprises to hire former soldiers, in part to ensure “social harmony and stability.”

[…] The buyout’s generosity underscores the special status of the PLA, which has been the ultimate guarantor of party rule since the country’s founding, crushing pro-democracy protests in Tiananmen Square in 1989. Those bonds make demonstrations or grievances involving former soldiers particularly sensitive to the government, and such issues are rarely discussed in public.

Xue Gangling, Dean of the China University of Political Science and Law, told a May 2013 seminar on military justice that protests involving ex-soldiers were among the country’s biggest potential risks to stability, Caixin magazine reported at the time. Xue said bureaucratic mismanagement contributed to an almost five-fold increase in such demonstrations annually between 2002 and 2004, rising to 140. [Source]

One Twitter user suggests to Gao Yu that heightened vigilance around veteran protesters may be linked to China’s maritime and territorial disputes. “Stability maintenance involving the military has in large part been created by the Sino-Vietnamese War,” comments @fanxiaojie1. “The veterans of that war want compensation. It’s not to China’s advantage that China fired the first shot (the Vietnamese call it the ‘Northern War’).“

Read more about the Chinese military via CDT.