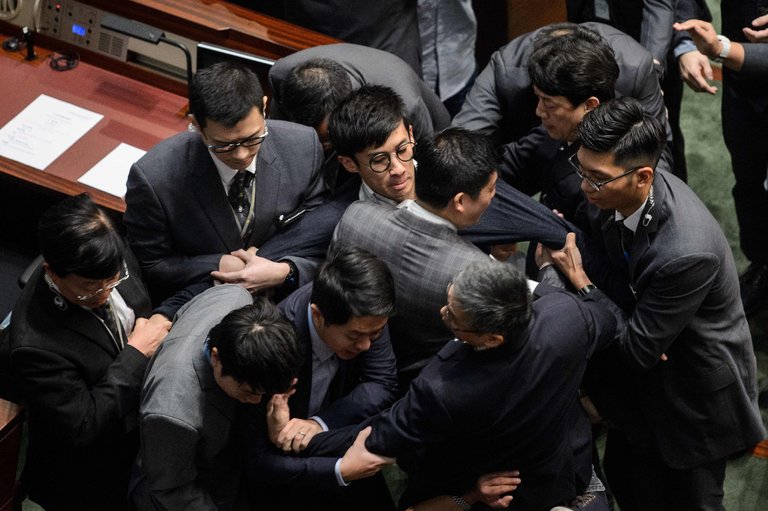 Chaos broke out at a meeting of Hong Kong’s Legislative Council when two newly elected pro-independence lawmakers, Yau Wai-ching and Sixtus “Baggio” Leung, tried to take their oath of office for the fourth time in a month. Yau and Leung were among a number of young, pro-independence candidates who won seats in the first legislative elections since the Umbrella Movement protests in 2014 called for electoral reforms and greater political autonomy for Hong Kong. Both Yau and Leung had been prevented from being sworn into the LegCo in October when they refused to swear allegiance to Beijing, as required by the Basic Law, Hong Kong’s mini-constitution. Kevin Lui at TIME reports on Wednesday’s meeting:

The newly-elected lawmakers, who do not accept that the territory is part of China, have been blocked three times from being sworn in. A clause in the oath requires the lawmaker to pledge allegiance to the Hong Kong Special Administrative Region of the People’s Republic China, but each time the lawmakers have deviated from the script or held banners that read “Hong Kong is Not China.”

On Wednesday, Council President Andrew Leung (no relation to Sixtus) ordered the pair ejected — but not before they had read out the oath of office using their own microphones, according to local media. The scuffles broke out as guards attempted to remove Sixtus Leung from the chamber.

[…] Some of the pro-democracy legislators — including Nathan Law, Hong Kong’s youngest-ever elected representative; Eddie Chu, who was forced into hiding at one point after his election, and veteran activist “Long Hair” Leung Kwok-hung — huddled around Leung, trying to prevent guards from carrying Sixtus Leung out.

“People elected by Hongkongers have the right to take their oaths of office and speak for Hongkongers!” cried Chu during the tussle. [Source]

Supporters of Hong Kong’s autonomy have expressed concern that the debate over the right of the legislators to take office may lead to intervention by the National People’s Congress Standing Committee in Beijing; under the Basic Law, Beijing has ultimate authority to interpret the law in Hong Kong, and has done so four times since Hong Kong was returned to Chinese rule in 1997. The Standing Committee will deliberate the issue at a meeting on Thursday, at the same time that the Hong Kong government will bring the case for judicial review in front of the city’s High Court in an effort to get the legislators barred. Michael Forsythe and Alan Wong at The New York Times explain:

Hong Kong’s government, loyal to Beijing, has asked the court system in the city, a former British colony, to review whether the council can let the lawmakers retake their oaths of office. The Hong Kong government and Beijing want the two representatives, who support independence for the territory, to vacate their seats rather than simply retake the oaths. A court in Hong Kong is set to hold a hearing on the matter on Thursday.

But a fusillade of invective against the pair in China’s state-controlled news media on Wednesday is leading to fears, backed by reports in Hong Kong news outlets, that Beijing may circumvent Hong Kong’s legal process by issuing a rare interpretation of the city’s mini-constitution that would effectively bar Ms. Yau and Mr. Leung from office.

That prospect has alarmed many people in the political, academic and legal communities in Hong Kong. The city has a strong and independent legal system, inherited from the British, that China has vowed to honor until at least 2047, as part of the agreement that paved the way for the resumption of Chinese rule in 1997. But a clause in the city’s mini-constitution, known as the Basic Law, gives China’s rubber-stamp legislature, the National People’s Congress, final say over interpretations of that constitution, though the provision has rarely been invoked.

If the Congress’s standing committee, which is in session, rules on the matter, it would amount to mainland China, where there is no tradition of independent courts and no expectations of genuine debate on legal interpretations, overriding the highly developed Hong Kong court system. The committee may meet to discuss the matter as early as this week. [Source]

Zhang Xiaoming, director of the China Liaison Office in Hong Kong, articulated Beijing’s position on the issue on Tuesday, according to a report by Chantal Yuen in Hong Kong Free Press:

“The terrible behaviour during oath taking is not something that is a trivial farce, but seriously breached the One Country, Two Systems bottom line,” said Zhang. “Any speech and activities advocating Hong Kong independence should be punished according to the law, and there should be no reason to tolerate or indulge it.”

He also said that such behaviour hurt the feelings of Chinese people around the world. [Source]

The phrase “hurt the feelings of the Chinese people” is frequently invoked by government officials when other countries, organizations or individuals say or do something that runs counter to the Party line.

Read more about elections in Hong Kong, the Basic Law, the localism movement, and the 2014 protest movement, via CDT.