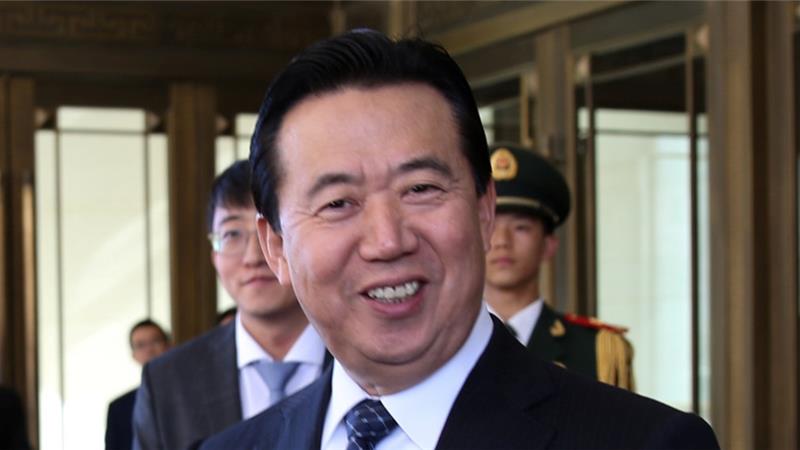 On November 10, the international law enforcement organization Interpol announced the election of its new president, Meng Hongwei. Given Meng’s position as China’s vice-minister for public security and senior roles in its paramilitary People’s Armed Police and Coast Guard, the appointment has stirred some consternation among rights activists and other observers. From Interpol:

Delegates at INTERPOL’s 85th General Assembly have elected Meng Hongwei of China as the new of President of INTERPOL.

Mr Meng, China’s Vice Minister of Public Security, who will take up his duties with immediate effect, said as a veteran policeman he stood ready to do everything he could towards the cause of policing in the world.

“We currently face some of the most serious global public security challenges since World War Two,” said Mr Meng.

“INTERPOL, guided by the best set of principles and mechanisms to date, has made a significant contribution to promoting international police cooperation.

“INTERPOL should continue to adhere to these principles and strategies, while further innovating our work mechanisms, in order to adapt to the changing security situation we see today,” said Mr Meng. [Source]

Recent years have witnessed closer cooperation and exchanges on law enforcement between China,Interpoland its members,which have produced substantial results. China highly values the important role played by Interpol, and stands ready to take on bigger responsibility and make greater contribution to push for global law enforcement and security cooperation.

We appreciate the active response from other member countries to our decision of running for the Interpolpresident. China will continue to fully support the Interpol’s work, keep deepening the mutually beneficial coordination with other member countries on combating transnational crimes and jointly create a secure environment for the prosperity and development of the world economy. [Source]

But the news swiftly prompted concern in other quarters. Human Rights Watch’s Sophie Richardson tweeted that Meng’s selection showed “appalling judgement or shocking naïveté on Interpol’s part,” while a New York Times editorial on Monday spelled out the case against him:

“The appointment of Meng Hongwei is alarming given China’s longstanding practice of trying to use Interpol to arrest dissidents and refugees abroad,” Nicholas Bequelin, East Asia director of Amnesty International, said in a statement. “It seems at odds with Interpol’s mandate to work in the spirit of the Universal Declaration of Human Rights.”

Beyond handling routine policing matters, China’s Ministry of Public Security protects the Communist Party and its leaders. This raises the possibility that Mr. Meng could use his influence at Interpol to target critics of the Chinese government. Mr. Meng steps into the post as Interpol embarks on an effort to systematically collect and share biometric information of suspected terrorists.

China and Russia are among the countries that have abused Interpol’s “red notice” database of information about fugitives. While the system is central to international law enforcement cooperation — preventing suspected terrorists from obtaining visas, for instance — it has been used to punish journalists, pro-democracy activists and human rights defenders. There is a mechanism for people to challenge red notice alerts, but it can be time-consuming and costly.

As Interpol’s president, Mr. Meng will run its executive committee, which plays a key role in setting the agenda for new initiatives and has oversight over the work of the secretary general, the day-to-day chief. His appointment calls into question the firmness of Interpol’s commitment “not only to refrain from any possible infringements of human rights, but also to actively promote the protection of human rights.” [Source]

The AP’s Christopher Bodeen placed the news in the context of China’s ongoing crackdowns on corruption and political dissent, both of which it has been striving to expand overseas:

More than 1 million officials have been handed punishments ranging from lengthy prison terms to administrative demerits or demotions. While authorities deny their targets are selected for political purposes, several of the highest-profile suspects have been associated with Xi’s predecessor Hu Jintao and other rivals.

China’s police and judicial systems have been routinely criticized for abuses, including confessions under torture, arbitrary travel bans and the disappearance and detention without charges of political dissidents and their family members. That has prompted reluctance among many Western nations to sign extradition treaties with China or return suspects wanted for non-violent crimes.

“While we think it’s important to fight corruption, the campaign has been politicized and undermines judicial independence,” Wang said. Meng’s election “will probably embolden and encourage abuses in the system,” she said, citing recent reports of close Chinese ally Russia’s use of Interpol to attack President Vladimir Putin’s political opponents. [Source]

Russia also received a senior Interpol appointment with the election of Police Major-General Alexander Prokopchuk as Vice President for Europe. On Monday last week, The New York Times’ Andrew Higgins examined in depth how Russia and others have used Interpol to harass political opponents:

Some countries, including Russia, “work really hard to get Interpol alerts” against political enemies, said Jago Russell, the chief executive of Fair Trials International, a human rights group in London, because “this helps give credibility to their own prosecution and undermines the reputation of the accused.”

[…] Based in Lyon, France, and comprising 190 countries, Interpol defines its role as enabling “police around the world to work together to make the world a safer place.” It has often done this, allowing police forces to share information about the whereabouts of mafia bosses, murderers and other criminals, and to secure their arrest.

But the Interpol membership of nations — like Russia, Iran and Zimbabwe — that routinely use their justice systems to persecute political foes has stirred worries that wanted notices can be easily misused. In September, the congressional Tom Lantos Human Rights Commission heard a litany of complaints about abuse from experts and victims of Interpol notices during a discussion of how to reform the police organization’s system of so-called red notices.

[…] Stung by criticism that its role fighting real crime is being hijacked by repressive regimes, Interpol has moved to strengthen safeguards against abuse, particularly since the naming of a new secretary general, Jürgen Stock, in late 2014. Mr. Russell, of Fair Trials International, acknowledged that the group “is trying to make it more difficult to game the system.” [Source]

In a letter published by The Guardian on Monday, Russell argued that the threat posed by Meng’s presidency has been overstated:

[…] China is one of many countries that have misused Interpol to pursue dissidents across the globe. It is wrong, however, to suggest that Hongwei’s appointment will allow China to do this more often and more easily. These decisions, with enormous implications for the people they affect, are made by Interpol’s secretariat, headed by Jurgen Stock (the real leader of Interpol’s operations).

Under Stock, Interpol has started the long-overdue task of creating safeguards against the kinds of abuse suffered by Uighur activists pursued by China. Last week, Stock announced further much-needed reforms to maintain “the confidence and trust of national law enforcement and wider society in Interpol”. The detail of these reforms haven’t yet been published so it’s hard to predict whether they will be effective in weeding out abusive cases. Ultimately, Interpol should be judged by whether it continues to allow its systems to be used as a tool of persecution. […] [Source]

In any case, Meng’s career has seen him embrace a vision of law enforcement that seems starkly at odds with the organization’s apolitical aspirations. The paramilitary roles of Chinese law enforcement agencies, the policing role assumed by the Party’s internal Central Commission for Discipline Inspection, and the conception of legal authority as subordinate to the Party’s all blur the line that Interpol tries to draw sharply. In October 2014, as the Party met to formulate plans for advancing “rule of law,” Xi Jinping made a speech reviving the Mao-era imagery of the law as a “knife handle” grasped by the Party and stressing deep entanglement of law and politics. Meng was one of many public security officials to publicly praise Xi’s comments, urging public security organs to “study and implement the spirit of General Secretary Xi’s important speech well, and fulfill the glorious mission entrusted to them by the Party and people.”

The same year, Ryan D. Martinson described the political uses of China’s Coast Guard, which had recently been reforged under Meng’s leadership:

Would the new China Coast Guard be an administrative organization filling out its ranks with civil servants, a possibility suggested by its situation within SOA? Or would it instead build a service of soldiers empowered to investigate, detain, and arrest, an equally plausible outcome given the appointment of Meng Hongwei, a senior officer within the Ministry of Public Security? The answer to this question has more than arcane importance. China deploys its maritime law enforcement forces as instruments of sea power, indeed, like a second navy. By patrolling and administering claimed jurisdictional waters, they defend and advance China’s position in its territorial and maritime boundary disputes. To date, the “rights protection” (weiquan) duties have almost entirely been performed by the civil servants, not the soldiers or policemen. Changes to this arrangement could have very real implications for other disputants. [Source]

Meanwhile, Meng’s election can only add insult to injury for Taiwan, which has repeatedly protested the extradition of its citizens from other countries to China for criminal investigation, and expressed “deep regret and discontent” at the rejection of its application to take part in last week’s assembly. From South China Morning Post:

The island’s Ministry of Foreign Affairs also said having no access to the information of Interpol – or International Criminal Police Organisation – was posing a challenge to Taiwan’s crime-fighting operations, especially since cross-border crime is becoming a serious problem amid the trend of globalisation.

[…] Taiwan was forced to withdraw from Interpol in 1984 when mainland China joined the organisation.

For the first time in 32 years, Taipei applied to Interpol in October to participate as an observer at its 85th annual general assembly, which runs from Monday until Friday in Bali, Indonesia.