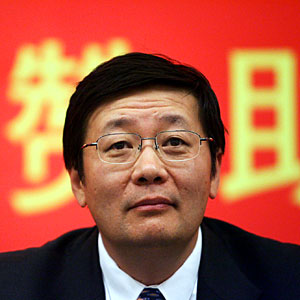 At The Wall Street Journal, Lingling Wei and Jeremy Page report on the surprise announcement from the Standing Committee of the National People’s Congress Monday that reformist finance minister Lou Jiwei had been removed from his post. The announcement came along with news that President Xi Jinping  had promoted more key allies, continuing a trend that has fueled much speculation over the president’s plan to further consolidate his power ahead of the 19th Party Congress next year.

Lou Jiwei, the ousted finance minister, was an outspoken Communist Party veteran picked for the job for his competence rather than a close relationship with Mr. Xi in the early days of the Xi administration.

Shortly before his appointment in the spring of 2013, according to people with knowledge of the matter, Mr. Lou expressed a wish to Premier Li Keqiang to allow him to serve his full five-year term. Mr. Lou’s pitch, these people said, was that he had a plan to overhaul the country’s creaky fiscal system and tax code and needed time to carry it out. The chat with Mr. Li helped launch him as a major voice for market-oriented changes in China.

On Monday, with nearly two more years to go before his term ends, the 65-year-old Mr. Lou—weakened in part by his loss of Mr. Li’s backing and at odds with senior officials bent on sparing no effort to prop up the economy—was succeeded by a relatively low-profile bureaucrat.

[…] The shuffle announced Monday by the Standing Committee of the National People’s Congress, China’s legislature, also brought in new ministers of state security and civil affairs in moves that promoted Xi loyalists. […] [Source]

The high-profile reformist, a protégé of former Premier Zhu Rongji, has been replaced by Xiao Jie, a former top aide to Premier Li Keqiang. At Bloomberg News, Yinan Zhao and Kevin Hamlin report on Xiao and what he will inherit from his predecessor, noting disagreement between analysts over the significance of the replacement:

Lou restructured local-government finances to reduce the cost of a record amount of debt run up by provinces after the global financial crisis. But his plans to clamp down on spending ran into opposition as they collided with the weakest growth in a quarter of a century. Xiao now takes up the baton at a time monetary policy has switched to neutral, leaving the economy more reliant on fiscal support.

“Xiao comes in at a critical moment for China’s fiscal reform,” said Jin Dongsheng, a former researcher at an institute under the State Administration of Taxation. “Some may worry if he is able to carry forward the reforms left behind by his predecessor. I think he is.”

[…] Lou’s retirement was widely expected and will have little impact on fiscal policy, according to Liu Li-gang, chief China economist at Citigroup in Hong Kong. “Fiscal policy is often decided by the State Council, while the MOF is often viewed as a policy executioner,” he wrote in a note. Xiao “will be even less likely to change this practice.”

[…] A restructuring of China’s fiscal system is “seriously overdue” and the loss of Lou is a “big deal,” said Barry Naughton, a professor of Chinese economy at the University of California at San Diego. [Source]

Reuters Kevin Yao and Elias Glenn also report that analysts the do not expect the reshuffle to have a major impact on China’s fiscal policy. At the BBC, Karishma Vaswani notes that the move comes amid heightening concerns of economic slowdown in China, and wonders if the surprise replacement is a sign that believed discord between Li Keqiang and Xi Jinping, evidenced in recent months by the two leaders’ conflicting messages on economic reform, is continuing.

[…S]hould this move be seen as a way to push out the vocal government critic, in favour of a more malleable and accommodating comrade? Or the physical manifestation of the power struggle between President Xi Jinping and Premier Li Keqiang?

It’s impossible to say for sure. China’s political decisions are rarely transparent and whether this was a move by President Xi Jinping to move someone into a position of power who shares his view of the economy, we’ll probably never know.

And there’s an argument that as Mr Lou turns 66 next month, enforced retirement beckoned anyway.

But what many China observers are saying is that President Xi is consolidating his power ahead of next year’s party congress – and while he does that, his focus on reforming the economy may not be topmost on his mind. [Source]

Xi Jinping was recently crowned “core” leader by the Party he leads—a move whose significance was disputed in regards to Xi’s overall cache of power. Shortly thereafter, Xi warned that “cliques,” “conspiracies,” and “fraud” were rife in the Party’s upper leadership.

Also announced on Monday was the replacement of 65-year-old Minister of State Security Geng Huichang with Chen Wenqing, a key ally of Xi Jinping’s anti-corruption czar Wang Qishan; and that Minister of Civil Affairs Li Liguo was being replaced by Huang Shuxian, formerly Wang Qishan’s deputy.

Read more about Xi’s ongoing anti-corruption drive, the recent shuffling within Party leadership, or commentary on the leadership transition expected at next year’s 19th Party Congress, via CDT.