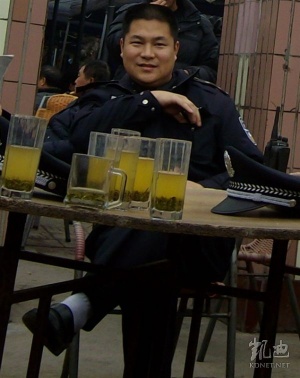 Euphemism for police interrogation. Guests invited to “tea” are asked about their political activities and warned against further involvement. Those compelled to attend these tea sessions are said to be tea-drinked.

Read about tea drinking experiences during the 2010 World Expo, the anniversary of Tiananmen, and the Jasmine Revolution. See also Yaxue Cao’s 2012 selection of over 30 accounts of tea drinking sessions, from the now defunct Chinese-language website “Records of Drinking Tea” (hē chá jì 喝茶记).

Huoguangweiyu (@火光微语): @郭玉閃又日 Brother Murong Xuecun “surrendered” himself to the police. At 5 p.m. today he was summoned to the Zizhuyuan police station for questioning. He’s still drinking tea with the police, and I’m waiting for him at a bar outside the station. (July 9, 2014)

In December of 2016, activist Liu Ermu, who is frequently “invited to tea” over his online activism, was detained and interrogated after commenting publicly on heavy-handed government efforts to deal with anti-smog protesters in Chengdu. In a follow-up WeChat post describing his experience, Liu noted variation in officials’ recent visits:

At around 7:30 pm on the 12th, two police officers came knocking at my door, asking if I was Liu Ermu. I admitted I was, and they asked me to leave with them. Before the police took me to drink tea with them the two other times recently, they called ahead to let me know. This time, they came right to my door. I felt that this time was probably a little more serious. So when I went to put on my shoes, I called my wife over and handed her my cell phone. I told her that if I wasn’t home by the morning of the 13th to put the word out.