News on Tiananmen Crash Circulates, and is Deleted 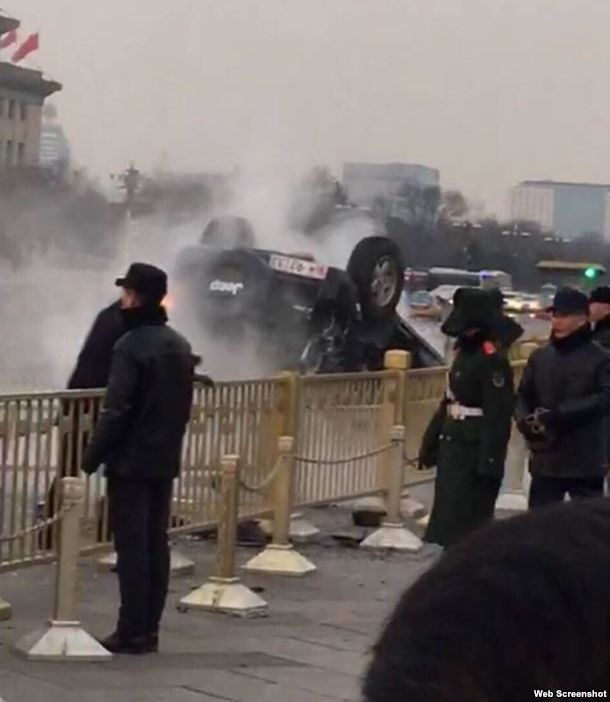 An overturned jeep in front of Tiananmen Square has generated discussion online as netizens share photos and video of the dramatic incident. Weibo posts on the topic are being censored and videos have been deleted. Beijing police issued a statement on the incident which concluded, “[we] urge the general public on the internet not to believe or spread rumours.” Catherine Lai at Hong Kong Free Press reports:

The incident occurred at 7:20 on Friday, Beijing traffic police said in a statement posted on its Weibo account. It said that a car accident occurred on the north side of the National Museum, without naming the square.

The driver and one passenger were injured, they said. Westbound traffic on Chang’an Avenue was congested for over an hour, the Beijing Youth Daily reported.

On Friday evening, another statement was released, saying there was no alcohol content in the driver’s blood. The driver was a local 26-year-old man surnamed Zhang, it said. [Source]

Netizens have since discovered that the jeep had military license plates, though little else is known about the driver or circumstances of the crash. The following videos and images were being spread on Weibo and other platforms but have since been censored:

Read more about the crash and the online reaction, via CDT Chinese.

In 2013, a jeep plowed into bystanders near Tiananmen Gate, killing five, in what authorities later determined was a terrorist attack. In 2014, eight people from Xinjiang were executed for “masterminding” the crash.