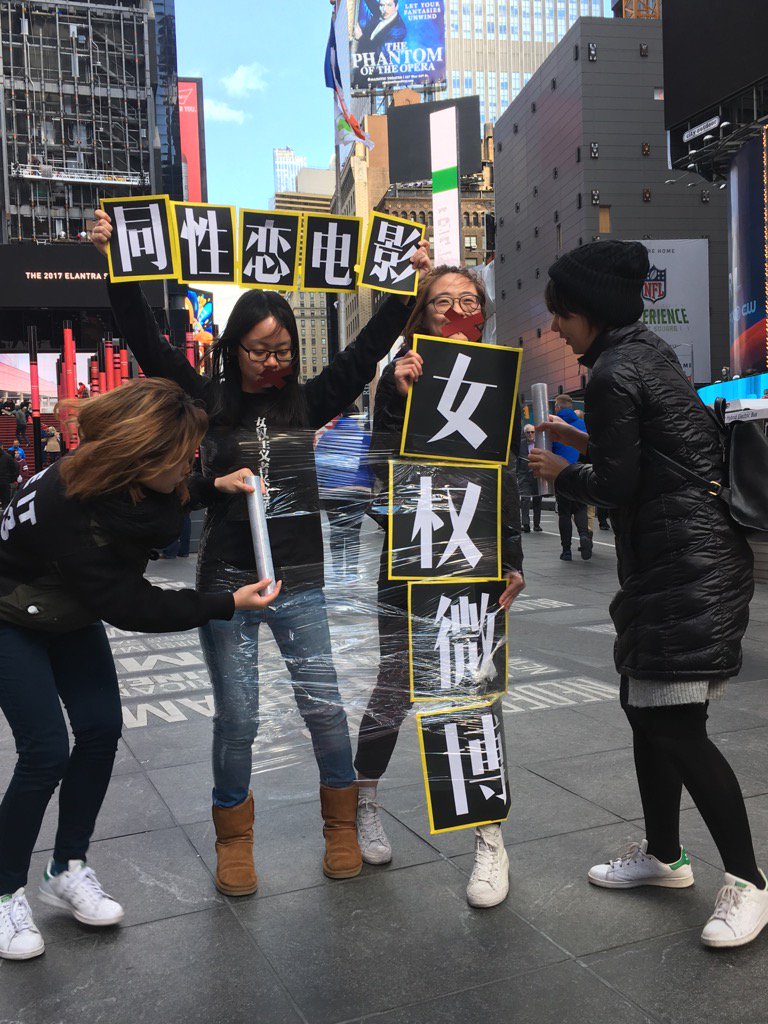 The official Sina Weibo account of prominent Chinese feminist group Feminist Voice (女权之声) has been temporarily banned for 30 days after the group posted a Guardian article on a women’s strike planned in the U.S. on March 8, which allegedly “violated the state’s laws and regulations.” Netizens’ response to the ban has been mixed, with some criticizing the group and others expressing support. At The Diplomat, Lotus Ruan looks at why everyone should support the group, arguing that the it is ultimately about standing up to China’s arbitrary system of censorship and information control.

The gag order, screenshot by Feminist Voice and shared widely by many activists, soon caught the attention of Chinese internet users. While many have joined the campaign to voice support for Feminist Voice, others had mixed reactions to the news. Under a thread asking “how to evaluate Feminist Voice’s being banned from posting on Sina Weibo for 30 days” on Zhihu, China’s Quora-platform dominated by male, well-educated, urban middle class users expressed disapproval of the group. Seventy-three people liked a comment that says “they deserved it.”

This does not come as a surprise as feminism has to some extent been stigmatized or is at least faced with complicated public opinion in Chinese society. However, there is a profound reason why everyone should support Feminist Voice on this particular matter to fight back against Sina Weibo’s decision — even if you do not agree with the group’s stance. Feminist Voice has initiated a much-needed effort to question company processes for censoring content.

In the past couple days, many supporters have been challenging Sina’s decision and simply asked: “why, how, and what Feminist Voice offended.” This is a badly needed step to push for the  overall transparency of China’s information control mechanisms.

[…] As one Weibo user said, “I don’t agree with many things [said by] Feminist Voice and Chen Yaya [a gender equality researcher critical of letting governmental or government-approved organizations dominate the course of feminism in China]. Sometimes I even find them quite stupid. But I strongly oppose censoring them. Debates would bring us closer to the truth. Only those who pay dirty tricks would stab someone in the back.” Joining Feminist Voice and others to question Sina Weibo’s gag order could be an opportunity to push forward a more transparent and less arbitrary information control mechanism. [Source]

At Sixth Tone, Zheng Jiawen explores the phenomenon of online prejudice against feminist groups in China, with a look at the use of derogatory terms like “grassroots feminist” and the negative impact that such discourse has had on the progress that feminists are making in the country.

Gu’s article exemplifies online debate over gender issues in China. It also touches on a particularly highly charged issue among China’s feminist community — namely, the pejorative usage of the term “grassroots feminists.” While tianyuan, which I have translated here as “grassroots,” originally referred to something rural or rustic, in this case it derogatorily refers to dyed-in-the-wool, stubborn, militant feminists who refuse to countenance alternative viewpoints. To add insult to injury, the character quan in the word for “feminism” is often replaced with a homophone meaning “dog.”

In recent years, variations of these terms have been applied by Chinese netizens as a means to disparage the feminist community. Some have used the terms to describe radicals who combine fervent calls for female empowerment with a contemptuous attitude toward men. In this sense, “grassroots feminists” can be compared with the English term “feminazi.”

[…] These days, the internet gives women more opportunities to participate in the discussion on gender issues and provides a larger space for feminist organizations to advocate their ideals and values. However, our prolonged neglect of feminist perspectives in both media and education has deprived the average person of the appropriate terminology that feminists tend to use. As a result, feminist discourse either appears convoluted, incomprehensible, and pretentious, or leaves itself open to being co-opted by individuals in a half-baked way, without their understanding the full force of feminist issues.

Yet the most concerning aspect of the emergence of pejorative labels like “grassroots feminist” is that they divert public attention away from policy-oriented debates and direct it toward the mindless mudslinging of feminists’ supposed radicalism or moral deficiency. The depiction of feminists and their practices as fundamentally confrontational may also prevent those who aspire toward realizing gender equality from recognizing the common ground they share with Chinese feminist activists. Even worse, stigmatizing the sometimes-unconventional practices of Chinese feminists — such as advocating the occupation  of men’s toilets by Guangzhou’s female university students in 2012 — weakens the power of feminist organizations at a time when they are trying to influence government policy. [Source]

Also at Sixth Tone, Earlham College’s Yu Peng explores the question of what we can learn about the women’s marches in the U.S. through the lens of Chinese philosophy, offering a Taoist interpretation of the movement that focuses on “body citizenship.”

Observing events from a Taoist angle sheds light on this unique political tactic and engenders a form of citizenship — something I call “body citizenship.” Body citizenship is an innovative way of engaging with politics through dissidence rather than compliance. Borrowing insights from the fourth century B.C. Taoist philosopher Zhuangzi, body citizenship hinges upon continual processes of political engagement that keep disrupting the established social order imposed upon women’s bodies.

[…] Zhuangzi’s citizenship is thus defined by its extraordinary potential to overcome the supposed superiority of one type of body over another. Whether we speak of homosexuals or heterosexuals, black people or white people, the disabled or the able-bodied, men or women, the Zhuangzian body questions the dualistic relationships between these groups. By abolishing boundaries between them, it bespeaks a oneness that binds everyone together. Zhuangzi’s ideal form of citizenship, then, is one that challenges restrictive definitions and embraces us all, regardless of social status. It is a forceful refutation of social segregation of any kind, and is constantly vigilant against any attempt to isolate one body from another.

[…] The women’s marches allow us to transcend the confines of our own bodies. We are more than ourselves when we are the bodies of others as well. Streets become new political sites in which notions of, for example, “male,” “gay,” “Hispanic,” or “old” are not only unimportant, but also nonexistent. Momentarily, at least, we become women’s bodies — and in doing so, we turn ourselves from prescriptive sexual objects into objects of patriarchy-challenging power.

This, in essence, is the beauty of the Zhuangzian body. Zhuangzi probably would have surmised that by claiming “Pussy Grabs Back,” citizens are translating their bodies into new forms of political resistance. Against the backdrop of a magnificent protest scene, citizenship is no longer something granted and controlled by law; instead, it is something won by the dissident body, something that disrupts old rules and constantly hankers for the new. [Source]