Person of the Week: Tang Danhong 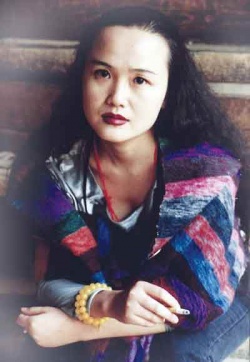 Tang Danhong is a feminist poet, avant-garde filmmaker, and ally of the Tibetan people. She has written extensively about Tibetan history and culture, especially the conflict between Tibet and China. She boldly confronts her own relationship to the Tibetan people as a Han Chinese woman.

Tang was born in 1965 in Chengdu, the capital of the southwestern province of Sichuan. Her parents’ abuse when she was a child is a major theme of her controversial 2000 documentary, “Nightingale, Not the Only Voice.” Before Tang became a filmmaker, she studied Library Science at Sichuan University, then went on to become an important poet in the 1980s. She won the Liu Li’an Poetry Prize in 1995. She also opened the Kafka Bookshop in 1994, which quickly became a gathering place for Chengdu intellectuals.

Tang started traveling to Tibet and befriended Tibetan writer and activist Tsering Woeser. Tang’s first documentary, “At Tsurphu Monastery” (在楚布寺), came out in 1998. She has made several films about Tibet, including “Nima Incarnate” (降神者尼玛), “At Samsara’s Door” (在轮回之门), and “Zhaxika” (扎西卡). More recently, Tang traveled to India with exiled writer Sangjey Kep to collect oral histories from elderly Tibetan exiles who had fled Tibet as the People’s Liberation Army entered and tightened control of the region in the 1950s. Kep and Tang published 11 interviews in the book “Troubled Times: Voices of Tibetan Refugees,” released in 2014 in Taiwan by Snowland Publishing House. (CDT translated four of the interviews into English.)

Tang argues that hostility toward Tibetans and institutional repression of the Tibetan people only push more Tibetans to favor independence over autonomy within the Chinese state, and to protest their repression in brutal ways, like self-immolation. In response to the March 2008 riots in Lhasa, Tang wrote:

Tibet is disappearing. The spirit which makes her beautiful and peaceful is disappearing. She is becoming us, becoming what she does not want to become. What other choice does she have when facing the anxiety of being alienated? To hold onto her tradition and culture, and revive her ancient civilization? Or to commit suicidal acts which will only add to Han nationalists’ bloody, shameful glory? [Source]

Tang currently lives in Israel, where she teaches Chinese at Tel Aviv University. She blogs at Moments of Samsara and tweets @DanHongTang.