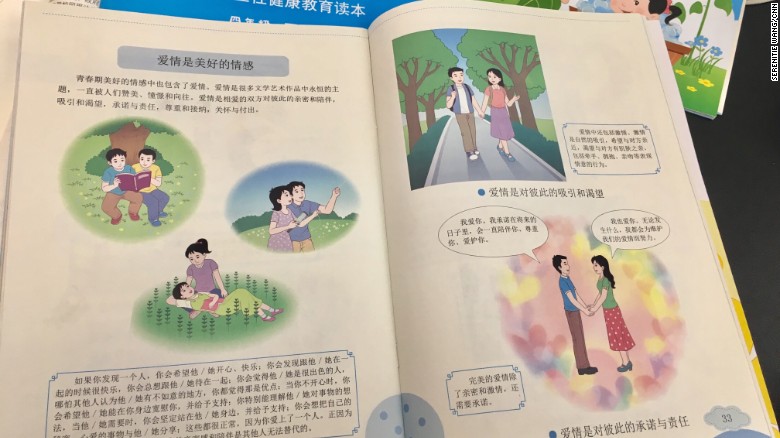 A series of sex education textbooks used in elementary schools in China has triggered a debate online after a mother in Zhejiang Province posted pictures from the textbooks on Weibo. Published by Beijing Normal University, the books contain illustrations showing reproductive organs and discussions about sexual abuse, among others topics, prompting some parents to argue that the content is too graphic for young children. Echo Huang at Quartz reports:

When Ying Zi heard her son utter the phrase, “Father put his penis into mother’s vagina,” she was mortified.

Her son, a second-year primary school pupil, was reading from a sex-education textbook. “We weren’t given notice from the school,” said Ying, who proceeded to post images of the textbook on Weibo (her post has since been deleted, but not before Chinese netizens grabbed a screenshot). “Is this really the right way for the book [to teach children]?” Facing mounting pressure, her son’s school in Hangzhou, China, ended up recalling all 12 books in the series, reports state media Beijing Youth Daily.

China has long been considered sex-shy, but some schools are breaking the taboo to properly teach children about sex. The textbook Ying’s son was reading was part of a series published by Beijing Normal University aimed at primary school students. The books are causing controversy not just because of their illustrations of sexual organs but also for saying that homosexuality is normal.

[…] But not everyone feels the textbooks are inappropriate. “The parents only felt awkward because they did not have any straightforward sex education themselves when they were young,” commented a user on Weibo (link in Chinese). Another added: “The most filthy minds are from those who themselves have received barely any sex education…it would cost your kids if they don’t know anything about it.” [Source]

The book’s publisher responded to the online backlash by stating that the material has been carefully scrutinized by experts before publication to ensure its suitability for children.

[…A]ccording to a statement by the publisher, the books have been used by 18 primary schools for children of migrant workers in Beijing. The series had been strictly reviewed before its release in 2010, the report quoted the publisher as saying.

The series’ author, Liu Wenli, said that while Chinese people traditionally believed that sex should not be taught in school, it was a “must-learn” subject in life, the report said.

“Now, the majority of sex-education materials focus only on introducing the development of the human body. But that’s not enough,” she said.

Schools in China have long lagged behind in terms of sex education, with many schools avoiding the topic completely. The lack of proper sex education and general taboo surrounding the topic have contributed to China’s HIV crisis and put the country’s youth population at increased risk of sexually transmitted diseases and unwanted pregnancies. From Serenitie Wang and James Griffiths at CNN:

Jing Jun, a professor of sociology at Beijing’s Tsinghua University, told CNN last year that many of his students had not received any sex education until they entered their first year of university.
In 2015, there were 115,000 new HIV infections in China, according to China’s National Center for STD/AIDS Prevention and Control (NCHHSTP). Of those, 17,000, or 14.7%, were in the 15-24 age group.
While the overall figure is fairly low compared to China’s massive population, the NCHHSTP estimate the annual growth rate among young people to be 35%.
China also has a very high abortion rate, which analysts have linked to lack of knowledge about other means of contraception. [Source]

Hindustan Times’ Sutirtho Patranobis reports that some of those who support the textbooks also cited the need for children to understand sex in order to protect themselves against sexual abuse:

One Weibo user, @yuansuiyuewukehuitou, argued in favour of the school and the choice of the book.

“There are so many sexually ignorant people across the country. Instead of avoiding telling children about it, what we should do is to help improve their understanding about sex so that they can better protect themselves.”

Sex education divides opinion among the Chinese, especially between older and younger generations.

But many cases of sexual assault on minors have increased the demand among parents for sex education for their school-going children.

“According to the China Social Assistance Foundation, over 500 child sex abuse cases were reported by the media in 2014,” the CNS report said. [Source]

The textbook’s focus on gender equality and its nondiscriminatory discussions about homosexuality have also gained it praise from observers as a step forward for the country.