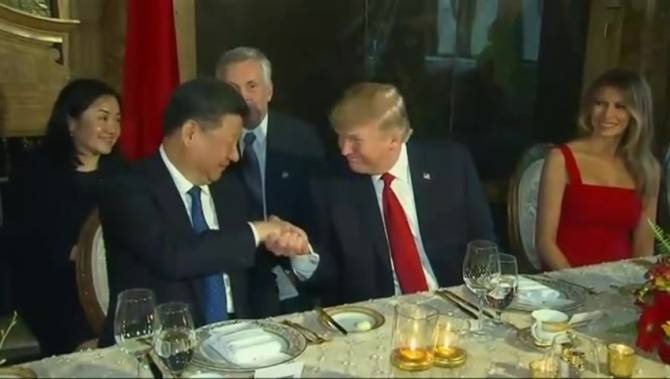 The Pew Research Center has released new survey results showing that Americans’ perception of China has improved in recent years. The overall increase in favorable views is due in part to diminishing concerns about economic threats from China as the U.S. trade deficit with the country narrows. Catherine Wong at South China Morning Post reports:

The survey, conducted by the Pew Research Centre between February and March, shows that some 44 per cent of Americans have a favourable opinion of China, up from 37 per cent a year ago.

“The growth in positive ratings for China may be due in part to declining concerns about economic threats from China,” said the report.

For example, only 44 per cent of respondents in this year’s poll saw the US trade deficit as a very serious problem, compared to 61 per cent in 2012.

The latest figures from the US Commerce Department show that the US trade deficit declined sharply in February, as imports from China fell by a record amount and American exports rose for a third straight month.

[…] The Pew survey showed that concerns about “the loss of US jobs to China” and “the large amount of American debt that is held by China” have also witnessed a significant decline, although these issues remain among the top five concerns. [Source]

Gallup also reports that Americans’ views of China is at its most positive in three decades. The polling firm found a noticeable difference in perception by political affiliation, with Democrats viewing China more favorably than Republicans. From Lydia Saad at Gallup:

Since settling into favorable ratings near 40% in 2001, China’s image has generally improved among Democrats and — to a lesser extent — political independents, while it has sagged among Republicans. Partisan divergence has been especially wide since 2011, when Democrats’ favorability toward China first crossed the 50% mark; during the same period, Republicans’ has been no higher than 40%.

Although President Donald Trump is known for his tough stance toward China on trade, Republican skepticism about China clearly predates Trump’s rise in the Republican Party after he announced his candidacy for president in 2015.

Today, 58% of Democrats and 53% of independents view China favorably, well exceeding the 38% of Republicans with this perspective. However, the six-percentage-point rise in China’s overall favorability in the past year, from 44% to 50%, is explained by increases among both Democrats and Republicans. [Source]

In a separate survey of 16 countries, the Pew Research Center found that China is no longer perceived as the world’s economic superpower, with the U.S. now taking the lead. From David Yanofsky at Quartz:

Of eight countries asked this question every year since 2008, only the French still see China as the world’s most powerful economy. Just four years ago, in 2013, respondents in six of those eight countries were more likely to pick China over the US. Even Americans picked China over their homeland in that year.

By contrast, in the most recent release of the survey, only three of 16 countries picked China over the US: France, Canada, and Australia.

In the results of another Pew survey announced today, the US is more concerned with China’s economic strength (52% of respondents) than its military strength (36%.) 89% of Americans think that the amount of US debt owned by China is “somewhat serious” or “very serious.” 81% were worried about the US’s trade deficit with China and 84% were concerned for the loss of US jobs to China. [Source]

Despite this change in the public’s perception of China’s relative economic strength, the country’s economic miracle continues to draw countries to emulate its model of success. In an interview with Ian Johnson at The New York Times, China scholar Sebastian Heilmann discusses the link between China’s economic success and its political system and whether it can serve as a viable model for other countries.

A key question you pose is how much of China’s success can be ascribed to this political system. What’s the answer?

There are several important elements. One is the party successfully sets long-term political goals, such as the modernization of industry or technology, or infrastructure planning. As Deng Xiaoping made clear in the 1980s, it can concentrate resources in priority areas. I see this as a strength in the initial phase of development, from say the 1980s to the mid-2000s.

Another crucial element is experimentation. This is something we ignore in the West — how unexpectedly flexible China’s deeply bureaucratic system can be. This flexibility has been demonstrated in the ability to set up pilot projects in special economic zones, in local tests — such as for housing reform or bankruptcy in state enterprises. Very difficult measures were regularly tested in pilot projects for several years before national laws were enacted.

[…] Ironically, it’s only now that some countries are looking at China as a model. Can it be a model?

For many years I would have said no, but many countries are struggling with how to deal with pressing basic problems like maintaining internal security, building physical infrastructure and providing jobs. These are the basis of populist movements around the world. China is a point of orientation. It can’t be duplicated because these other countries don’t have a Communist Party with the special history and features of China’s. But in terms of considering illiberal, state-directed solutions, China is often cited as an example of how an authoritarian government can deal with things differently. China’s experience is thus a permanent question mark for the world when they ask if the Western model is the best. [Source]

At Bloomberg View, Tyler Cowen looks at how China’s success creates an allure for authoritarianism and why we should not underestimate the pull of governing ideologies and the human desire to mimic even when the system under question is flawed.

If I look back at the 20th century, I am struck by the pull exerted by powerful governing ideologies, even when those systems were evil or failing. Thousands of intellectuals endorsed Stalinism, even after many of its worst practices came to light. Marxism in its broader forms had more adherents yet. Extreme right-wing ideologies exercised a strong pull as well, at least until they became America’s outright enemies as the Second World War approached. Mussolini’s fascism was quite popular with many Americans, including New Deal intellectuals and leaders.

You can scold the sympathizers for their naivete or illiberal tendencies, but there is a deeper truth. Individuals have a mimetic desire to copy or praise or affiliate what is perceived as successful, and a lot of our metrics of success have to do with power rather than freedom or prosperity. So if there is a powerful system on the world stage, many of us will be drawn to it and seek to emulate it, without always being conscious of the reasons for those attractions.

[…] Of course, outright ideological admiration for the Chinese system is pretty hard to come by in the U.S., unlike the kinds of affection formerly expressed for Soviet communism. Nonetheless general praise for the Chinese miracle is pretty common. And the successes of foreign authoritarianism may be an underappreciated factor inducing the U.S., the U.K., Turkey, Hungary and Poland to come up with their own home brews of the ideas. It might be that the current incarnation of the Chinese Communist Party is too nationalistic, and too atheoretical, to inspire much direct loyalty. Nonetheless the economic successes of China and some other countries may have helped create an underlying crisis of confidence in liberal ideas and values. In Africa, for instance, Ethiopia and Rwanda have been improving living standards fairly rapidly, but they too have moved toward authoritarianism systems. [Source]