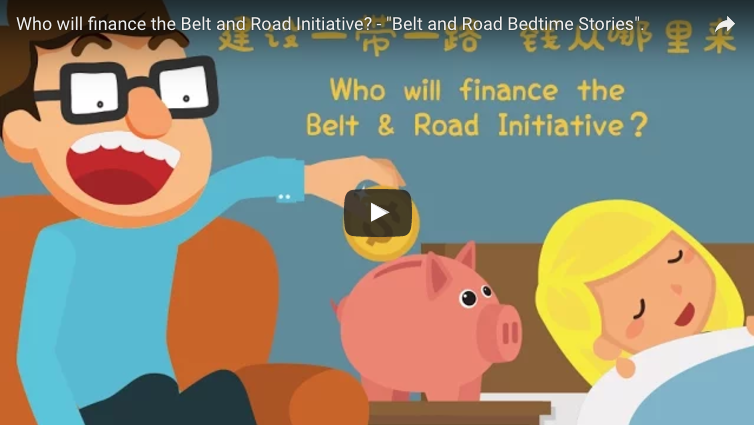 In addition to “The Belt and Road Is How,” state outlet China Daily also released a “Belt and Road Bedtime Talks” video series geared towards young foreigners. In it, a father played by China Daily journalist Erik Nilsson explains to his daughter the many facets of the OBOR initiative in an effort to paint China as a leader in globalization. By noting the apparent absence of the United States in the multi-country project, the propaganda film has subtly cast President Donal\][1d Trump and his isolationist “America First” approach in a negative light without explicitly mentioning names:

The video clips, which are believed to be aimed solely at foreigners, represent a broader attempt by the Chinese government to reach a global audience and present a favorable image of the country to the world. From AFP:

It is not the first time that China features foreigners in videos to promote a government program. In 2015, state news outlets posted a psychedelic music video to explain the country’s “13th Five-Year Plan” development road map.

“This is part of a larger trend in which Chinese state media are trying to reach a global audience,” said Manya Koetse, who tracks social trends in China as editor of What’s on Weibo.

“They showcase China’s role in the world as a harmonious leader that helps the whole world become a more prosperous place.” [Source]

At The Washington Post, Ana Swanson writes that China’s self-portrayal as the champion of globalization and free trade does not match up with the country’s actual trade policies, which are often more closed off in terms of who the nation trades with and the conditions under which it does so. In effect, is it America’s retreat under Trump that has made it possible for China to brand itself as a beacon of free trade.

“Having China be the world’s leading advocate for globalization is like having Al Capone be put in charge of tax reform,” said Scott Kennedy, deputy director of the Freeman Chair in China Studies at the Center for Strategic and International Studies, a Washington think tank.

The problem with this characterization is that China’s economy is still far more closed than the United States’ when it comes to trade and especially investment – and China has shown less, not more, willingness to open its economy to foreign investment in recent years.

[…Much] of that business is still done on China’s terms. In many industries, state-owned companies still dominate, and foreign businesses face high barriers to entry. In some industries, such as automotive manufacturing, foreign companies can operate only by forming joint ventures with Chinese partners. In other sectors, such as media, energy and banking, foreign companies are entirely excluded – often in contravention of World Trade Organization rules.

[…] It is true that China is becoming a de facto leader in foreign trade. But the sole reason that China can make this claim is that the United States is receding from that role, Kennedy says. [Source]