Relying on his regularly updated Twitter and YouTube accounts, exiled billionaire Guo Wengui continues to gather fans both inside and outside the Great Firewall as he hurls allegations of corruption at business, political, and media leaders in China. Meanwhile, his adversaries this week continued their work presenting Guo as the truly corrupt one: Caixin published an article detailing Guo’s leveraging of his connections with former British Prime Minister Tony Blair to raise money from Abu Dhabi royalty for an attempted takeover of Chinese securities giant Haitong Securities; and SOHO chairman Pan Shiyi announced plans to sue Guo over allegations of bribery and bid-rigging that Pan claims are false.

On Twitter yesterday, Guo shared a picture of himself in a new armored vehicle, highlighting his growing concern for his personal safety:

Today my associate gave Wengui [me] a bullet-proof B9 armored car. I truly felt that I didn’t need it. But he told me there were still three more that were about to arrive. Honestly, I am not happy. I don’t wish for them to look at my country in this way. I also don’t wish for them to be so concerned for my safety! I still hope that we can resolve my issue internally! He said I am too naive.

Guo’s many Twitter fans replied, praising the “hero,” imploring he do his upmost to maintain his personal safety, and comparing the following he is gathering to the 1989 pro-democracy movement. CDT Chinese editors have collected a large sample of supportive reactions to Guo’s tweet, a few of which have been translated here:

This means your friends are loyal and worth sticking with. Old Guo, your friends are right. You can’t be too careful. Think about it: if a government can crush children under tanks, what horrific things wouldn’t it do?

If a rogue state executes unarmed students with tanks, what wouldn’t it do?

Mr. Guo, from Day One of your leaks you and the CCP no longer had an “internal problem,” and there’s no “internal” plan to solve this. The CCP sees you as a malignant “cancer” growing inside the system, and they have to eliminate you, and fast.

Kim Jong Un knocked off Kim Jong Nam. What’s the difference between West Korea and North Korea? You’re in a deathmatch with the TG.

Putin killed opposition party leader Nemtsov three years ago. Everyone was shocked, but now what? Who remembers it? They don’t care whether you leak or not, they’re shameless. I suggest you sort out their overseas assets, make the U.S. government expropriate them, and set up an assassin squad to keep things in check.

Ha ha ha ha, after liberation they’ll have to put those cars in a museum because of their historical significance

Just rest easy and say thanks, General Guo. You’re stopping bullets. The leaders of the traitor-thieves, Wang Qishan, Meng Jianzhu, and Fu Zhenghua, they’re stopping the people’s mouths. When the time comes that they need to stop bullets, I don’t think they’ll be around anymore.

You’ve got to be careful! The three most important things to do every day: eat, sleep, and watch Wengui

The supportive responses to Guo show that while Zhongnanhai regards the man as a villain, his followers outside of the Great Firewall are seeing him as more and more of a hero capable of taking on the CCP, and appear to have faith that he can back up his allegations against top Party leaders.

As Guo’s memetic catchphrases have been found on Chinese social media even amid standing censorship directives forbidding unsanctioned commentary on the sensitive character, outside of the Great Firewall his fans have begun comparing him to heroes from Chinese history, literature, and film.

He has been cast as a modern-day Jing Ke, a would-be assassin of the King of Qin. Jing Ke finagled his way into the Qin court with a poison-dipped sword hidden in a map of territory Qin could conquer. When the king unfurled the map, Jing Ke grabbed the sword, but hesitated, his plans unraveled, and the king survived to conquer the warring states and become the first emperor of the Qin Dynasty. Netizens invoke Jing Ke as a brave martyr to his cause, forgetting (or disregarding) his mediocre swordsmanship and nervous habits. They think instead of Jing Ke’s appearance in the 1998 film “The Emperor and the Assassin,” then mix their metaphor with the Zhao family, a code name for vested interest taken from Lu Xun’s 1922 novella “The True Story of Ah Q.” Riffing on the film’s Chinese title, “Jing Ke Assassinates the King” (荆轲刺秦), netizens have coined a new title for the sequel: “Wengui Strikes Zhao” (文贵伐赵).

Guo doesn’t mind the comparison at all. He even pinned a Jing Ke look-alike image to his Twitter feed, as he again hinted at his imminent “global news conference”:

Respected Twitter friends: tomorrow is May 26, then comes 27, then 28. I have a lot of important business to attend to related to the global news conference. At the same time, I also wish you all a safe weekend with your families. So for these three days I’ll only be able to send tweets announcing that I am safe and sound. Wengui hereby reports to you!

Guo has also been likened by his fans to other historical and folk anti-heroes, such as Wu Song, the drunken bandit who kills a tiger with his bare hands…

…Dahai, the miner who serves his own form of justice to greedy officials in Jia Zhangke’s 2013 film “A Touch of Sin”…

For his part, Guo has tweeted an image himself in the likeness of Guerrillero Heroico Che Guevara:

He has also added English to several of his posts to appeal to a global audience: 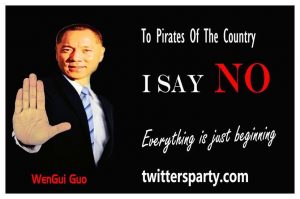 Post translated and written by Anne Henochowicz and Josh Rudolph.